Bernie's road ahead: Three options for the sunset of his campaign

Sanders' clearest strategies are the noble route, the ego route and the nuked-from-space route 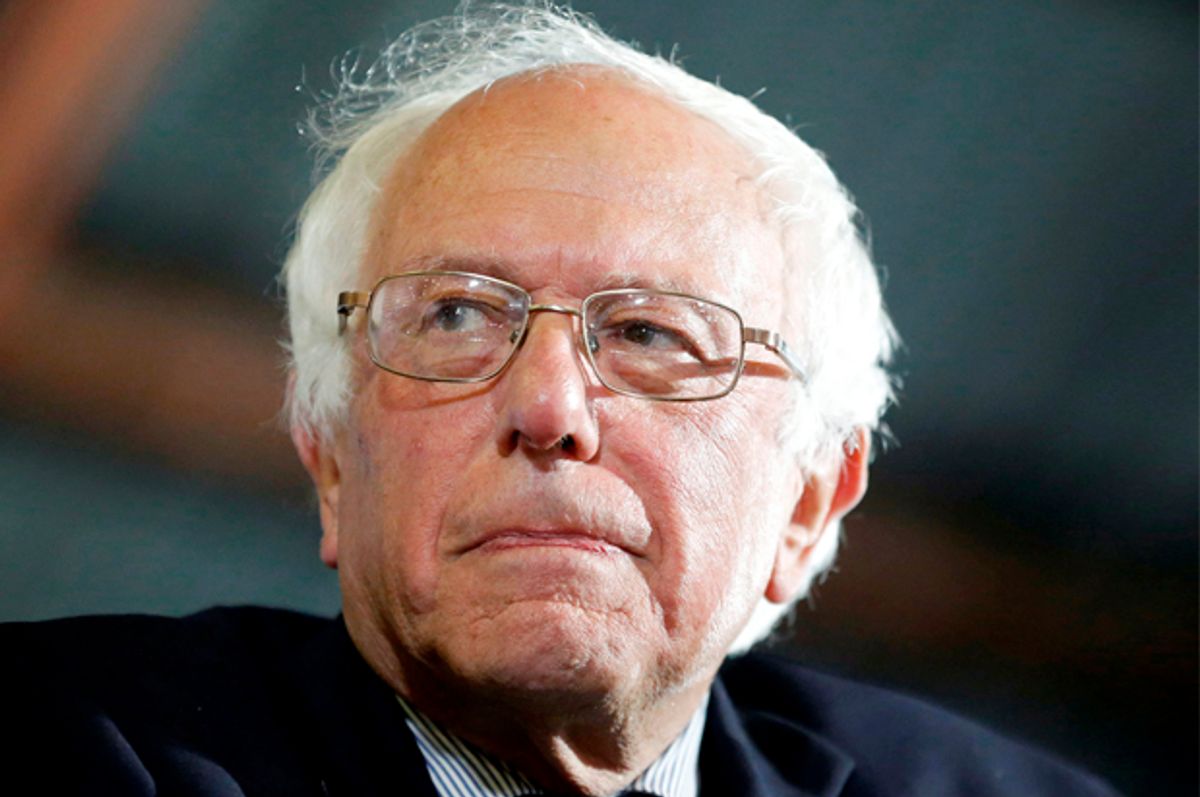 If you're shocked by the fact that Bernie Sanders didn't acknowledge Hillary Clinton's historic clinching of the Democratic nomination Tuesday night, you probably haven't read the captivating new article in Politico, this week, "Inside the bitter last days of Bernie's revolution," in which it's clear that Bernie isn't anywhere near the headspace required to give Hillary the credit she's more than earned today. He congratulated her, and that was it. We might not see anything more than that, at least until next week at the earliest — if at all. We'll circle back to this presently.

If the reporting in Politico is accurate, Bernie isn't a happy revolutionary these days. The once noble, principled champion of the people has apparently been consumed by ego and bitterness, and it's not all surprising to those of us who've been following along with an objective eye.

Bernie's campaign began as one of ideas. His goal was, like most spoiler candidates, to influence the debate and to offer the progressive wing of the party an alternative to Hillary, who, even a year ago, was considered the lone frontrunner and would-be nominee. Since then, however, Bernie seems to have become trapped inside the whirlwind of his own success as not simply an idea man, but as a viable candidate for the nomination. Let's face it, though, most of us would fall prey to the same temptations, so feel free to holster the schadenfreude. Winning 22 primaries and caucuses, while speaking to rock-star-caliber audiences numbering in the tens of thousands is nearly as addictive as the strongest opioid, and the notion of walking away cold-turkey is unspeakable to the fully addicted.

Consequently, Politico's reporting tells of a candidate whose only remaining internal allies are the two people who've been part of his inner circle for years: his wife, Jane, and his closest adviser, Jeff Weaver. Beyond that, Bernie's advisers, according to the report, realized months ago that he didn't have a shot of overtaking Hillary on delegates, and, today, they're rapidly jumping ship — as evidenced by their willingness to expose Bernie's dirty laundry to Politico. We also learned that it was Bernie's idea to propose a stunt-debate against Donald Trump. It was Bernie's idea to attack Clinton as "unqualified" — an attack that might've cost him New York. One Bernie adviser, Mike Casca, wrote to Weaver and warned that the campaign was "actively destroying what Bernie worked so hard to build," after the disaster in Nevada. It turns out, challenging the Nevada delegate count at the state's convention was Bernie's idea and, as Bernie people told Politico, it was a reputation-ruining move, all for the sake of picking up two inconsequential delegates.

The article also revealed how Bernie micromanaged the campaign down to the checking-account level, declaring a $10 million floor for the account balance, which apparently helped the candidate to lose in Kentucky. Bernie apparently ordered that the campaign focus on "data and field" operations rather than allocating cash to television advertising. Bernie also refused to offer support to down-ballot candidates like Russ Feingold, who's fighting to unseat GOP fire-eater Ron Johnson, who poached Feingold's Senate seat six years ago. Bernie, too, was responsible for vindictively attempting to unseat Barney Frank from the rules committee. Meanwhile, veteran Democratic operative Tad Devine has mostly stepped away from the Bernie camp, hiding out in his Rhode Island home.

But the most damning section of the write-up described Bernie's state of mind like so:

Sanders is himself filled with resentment, on edge, feeling like he gets no respect -- all while holding on in his head to the enticing but remote chance that Clinton may be indicted before the convention.

So, like most politicians and, indeed, the rest of us, Bernie isn't superhuman. He's susceptible to paranoia, ambition and political vendettas, and his choices, at least recently, seem to be driven by his ego more than his belief in an altruistic, well-meaning political revolution. Frankly, his desperate reliance upon Hillary being indicted in order to seize the nomination borders on loathsome, given the consequences for the party and especially the general election. Indeed, Bernie's actions in the coming days could decide whether the revolution continues onward, with or without him, or whether it self-immolates due to logic-free flailing and bad decision-making in the face of process and political reality.

Bernie has three options moving forward. Each one carries with it perils and upsides, depending on your point of view.

1) The noble route. The most obvious and least damaging option is for Bernie to graciously concede to Hillary and encourage supporters to work through the various stages of grief before getting on board with the bigger picture: defeating Trump, electing down-ballot progressives and carrying on the revolution with honor and renewed tenacity beyond this year's contest. Loyalists will hate it, but making peace with such an option will only benefit their revolution. (I'm assuming the revolution talk is genuine and will last beyond Bernie's direct participation. Though I'm doubtful it will without a pied piper leading the way.) The massive upside here is that Bernie will have time to repair tensions with the party, while emerging out of the convention as a progressive king-maker rather than a spoiler and a pariah.

2) The ego route. Bernie's second most likely course of action is to take his campaign all the way to the convention. The process could include taking shots at Hillary via surrogates and disciples on social media, with continued hints about an indictment (that likely won't happen). This option would surely damage Bernie's reputation itself, defying the advice of President Obama, among other powerbrokers. He'll lose most of his clout in the party, as well as losing the advantage of coalition-building with important Democrats in the Senate. But it won't completely bury his reputation. The next option, on the other hand, would annihilate him.

3) The nuked-from-space route. Based on the Politico item, it appears as if it's still within Bernie's capacity to toss aside caution and to run as an independent candidate in the general election. This is the nightmare option. He'd lose, of course, but there's a solid shot that he'd take Hillary down with him. And perhaps, noting his alleged edginess and resentment, that's the point. He believes the nomination was his, and Hillary and Debbie Wasserman-Schultz stole it from him via a rigged process. (He won 22 states, which is a lot in an apparently rigged election.) His supporters mostly agree, and, along those lines, he'd have plenty of existing support entering the general as a independent. But his supporters had better be prepared to work hard because they'll be all alone. Political lepers. Unserious fringe-dwellers. Bernie's Senate career would effectively end. Most Democrats who were once deferential to Bernie, and especially women and minorities, would regard Bernie as a crackpot and a villain, second only to Trump himself. The future of a broader revolution would rot on the vine.

What's truly insomnia-inducing is that it's ultimately about whatever's rattling around in Bernie's head. And there are solid indications that he's not thinking very clearly, at least in terms of politics. The smart money continues to be with option #1, as the most likely route. But until we hear it from Bernie himself, the possibilities of #2 and, horrifyingly, option #3 should be viewed as residing firmly on-the-table. Hopefully, there are advisers who still have his ear and, hopefully, they're lobbying their guy to stand down.