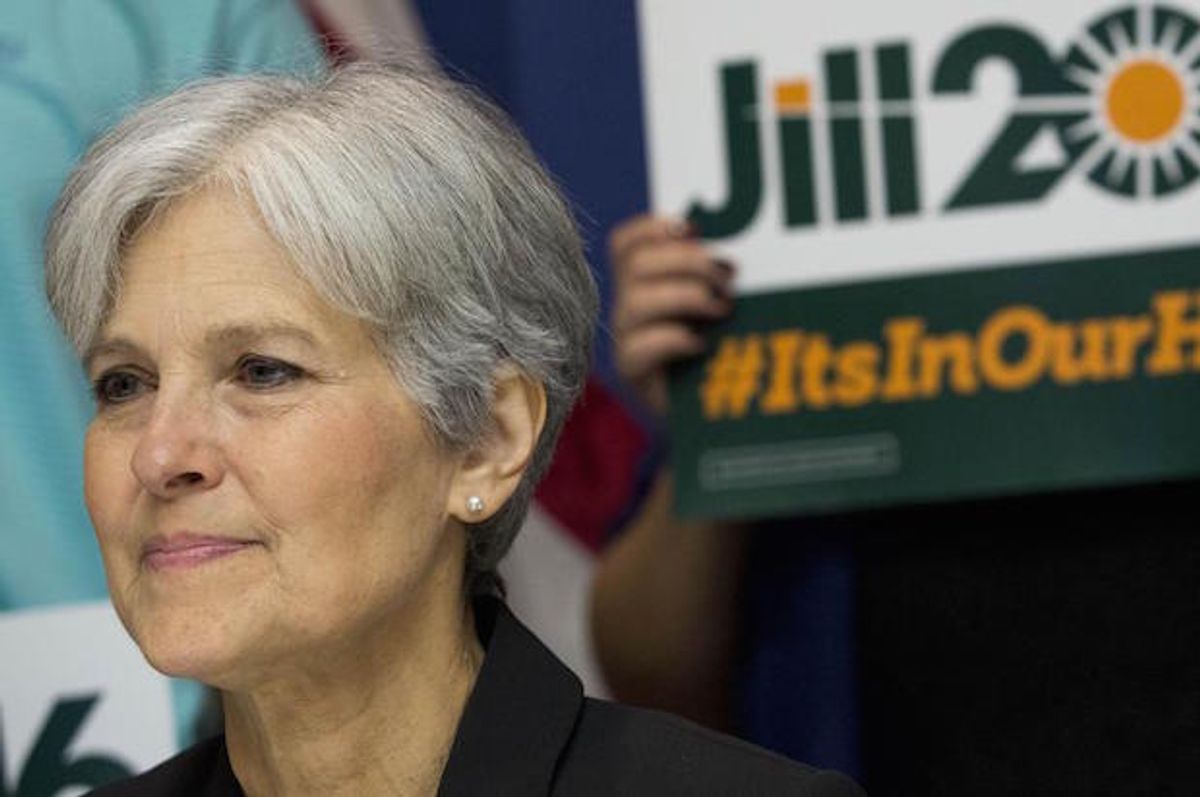 The Clintons' own right-wing policies helped spawn the rise of far-right demagogues like Donald Trump, argues the Green Party's presidential candidate. She warns that a Hillary Clinton presidency would only continue to fuel this right-wing extremism.

Dr. Jill Stein, the Green Party nominee for president, spoke on Democracy Now on Thursday. She blasted Hillary Clinton for implementing many of the same policies that Trump is currently calling for, and expressed hope that Bernie Sanders will consider continuing his presidential run on a third-party ticket.

The present electoral system "tells you to vote against what you’re afraid of and not for what you believe," Stein said. "This politics of fear has actually delivered everything we were afraid of."

"All the reasons you were told you had to vote for the lesser evil — because you didn’t want the massive Wall Street bailouts, the offshoring of our jobs, the meltdown of the climate, the endless expanding wars, the attack on immigrants — all that, we’ve gotten by the droves, because we allowed ourselves to be silenced," she explained.

"Donald Trump himself is lifted up by a movement which is very much the product of the Clintons’ policies," Stein argued. "The lesser evil very much makes inevitable the greater evil, because people don’t come out to vote for a politician that’s throwing them under the bus."

The Green Party nominee pointed out that Hillary Clinton, the Democratic Party front-runner, has previously supported many of the same positions on Wall Street, economics, immigration, war and the environment that Trump is currently advocating.

"Putting another Clinton in the White House is only going to make that right-wing extremism greater."

Under a second President Clinton, Stein said, "We will see more of these neoliberal policies, like Wall Street deregulation, like the Trans-Pacific Partnership, which Hillary has always supported. She’s changed her tune a little bit, but Hillary has walked the walk. Look at the walk and not the talk."

"Trump says very scary things — deporting immigrants, massive militarism and ignoring the climate. Well, Hillary, unfortunately, has a track record for doing all of those things," she added.

Clinton boasted at a town hall in New Hampshire in November 2015 that, as a senator, she had voted for 2006 legislation that authorized the building of roughly 650 miles of wall on the border.

“I voted numerous times when I was a senator to spend money to build a barrier to try to prevent illegal immigrants from coming in,” Clinton bragged. "And I do think you have to control your borders."

The campaign of then-presidential candidate Martin O'Malley condemned her comments, insisting, "Secretary Clinton bragging about building a border fence over in New Hampshire today is exactly the kind of outdated, intolerant thinking that the Democratic Party cannot represent."

In the Democracy Now interview, the Green Party presidential candidate also slammed Clinton for her support for the 2009 Honduran coup, in which the military toppled the democratically elected left-wing government and replaced it with a far-right regime, plunging Honduras into such extreme violence that it soon became one of the murder capitals of the world.

"Hillary has supported the deportations of immigrants, opposed the refugees — women and children coming from Honduras, whose refugee crisis she was very much responsible for by giving a thumbs-up to this corporate coup in Honduras that has created the violence from which those refugees are fleeing. She basically said, 'No, bar the gates, send them back,'" Stein explained.

"So we see these draconian things that Donald Trump is talking about, we actually see Hillary Clinton doing," she added.

"And it’s not only the militarism that Trump talks about, it’s Hillary’s massive record of militarism," Stein continued.

As secretary of state, she stressed, Clinton "was the prime mover behind" U.S. support for NATO's catastrophic 2011 bombing of Libya.

Stein also recalled Clinton's staunch backing of the illegal U.S. invasion of Iraq in 2003, along with her extreme bellicosity toward Iran, her aggression against Russia and China and more.

"We are rushing towards war with Hillary Clinton, who has a track record," Stein warned.

Even The New York Times, which endorsed Clinton for president, has admitted that she is more of a hawk than her Republican counterparts. The U.S. newspaper of record noted that neither Trump nor Ted Cruz "demonstrated anywhere near the appetite for military engagement abroad that Clinton has," concluding, "Hillary Clinton is the last true hawk left in the race."

As for climate change, Stein recalled that Secretary of State Clinton was such a supporter of fracking, which she now claims to oppose, that she established an initiative to promote the environmentally destructive practice around the world.

"What we are facing," she explained, "is not just a question of what kind of world we want to be, but whether we will be a world at all."

"The way the nuclear arms race has been re-engaged, the way Hillary Clinton wants to create an air war over Syria through a no-fly zone against another nuclear-armed power — that is, Russia — the climate crisis, where the day of reckoning is coming closer and closer all the time."

From lesser evil to greater good

The Green Party nominee implored progressive Americans to "stand up."

"Don’t be a victim of this propaganda campaign, which is being waged by people who exercise selective amnesia," she said. "They’re very quick to tell you about the terrible things that the Republicans did, but they’re very quick to forget the equally terrible things that have happened under a Democratic White House, with two Democratic houses of Congress."

"We can’t keep using this failed policy of silencing ourselves with this politics of fear. It’s time to forget the lesser evil, stand up and fight for the greater good like our lives depend on it, because they do."

Meanwhile, millions of Americans "are clamoring for another independent or several independent candidates and an independent party, and feel that they are being terribly misserved and mistreated by the current politics," she said.

"Donald Trump is buoyed up by the policies passed by Bill Clinton, supported by Hillary," Stein said. "That is, deregulation of Wall Street, which led to the disappearance of 9 million jobs, 5 million people thrown out of their homes, and by NAFTA, which exported those jobs. That’s exactly the economic oppression and stress that has led to this right-wing extremism."

Stein noted that Congress and statehouses around the country are now flipping from red to blue, in response to the Democratic Party's failure to deliver on its promises.

Another decade of similar policies will only further the atrophy of the left, and the surge of the right, she emphasized.

Democracy Now host Amy Goodman noted that some supporters of Bernie Sanders have adopted the slogan "If it’s Hill, it’s Jill," meaning that, if Clinton is the Democratic Party's nominee, they will instead vote for Stein.

The Green Party presidential candidate called on Sanders to continue his presidential run on a third-party ticket.

"The Democratic machine has very steeply tilted the playing field" against Sanders, she noted, citing the DNC's limiting of debates, the restrictions on exposure to Bernie Sanders, the purging of voters, the huge discrepancies between polls and election outcomes, the unelected elite superdelegate system, the fatalistic and misleading media reporting and more.

"This is what the Democratic Party has done for decades — many decades, in fact," Stein said. "Over the years, the party has allowed principled candidates to be seen and heard, but has, at the end of the day, sabotaged them in one way or the other, often through fear campaigns and smear campaigns, in the same way that Bernie is being called a spoiler now."

"In many ways, the Democratic Party creates campaigns that fake left while it moves right and becomes more corporatist, more militarist, more imperialist," she added.

Stein urged Americans to push for third-party alternatives. She also expressed hope that the U.S. could implement a more democratic system of ranked-choice voting.

"Power concedes nothing without a demand. It never did, and it never will," Stein stressed, quoting renowned abolitionist Frederick Douglass.

"This is why third parties are effective, whether they’re in power or whether they are simply pushing. Otherwise, there is no counterweight of the power of corporations, which have basically taken over the two major corporate political parties," Stein warned.

"It’s very important for us to move ahead," she concluded, and to make a "world that works for all of us, based on putting people, planet and peace over profit."