Obama, Warren, Biden: They're with her — Hillary's all-star surrogates give her a massive edge over Trump

Unlike Trump, Clinton has an influential and politically talented group of backers proudly in her corner 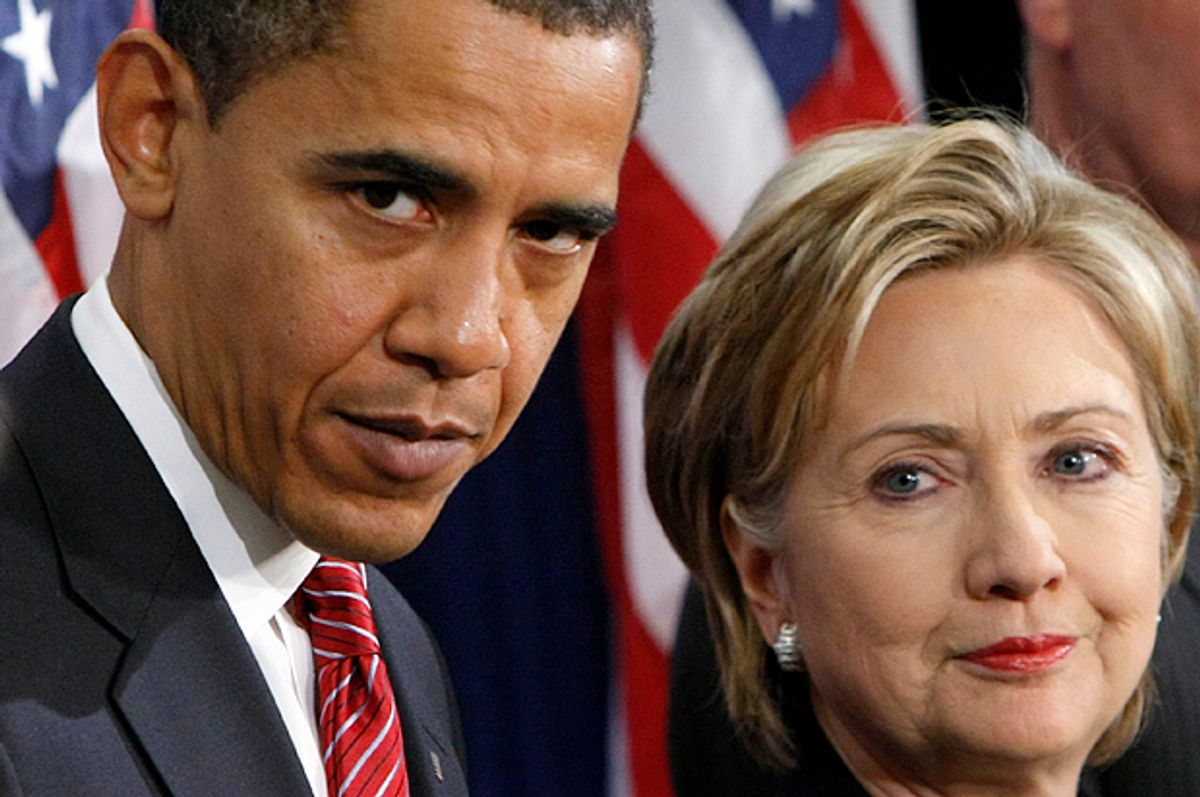 One of the articles of faith leading up to this presidential election season was that the Republicans had a very "deep bench" featuring a cornucopia of superstar politicians. They had governors like the union-slayer Scott Walker, GOP royalty Jeb Bush, burly tough guy Chris Christie, the Texas success story Rick Perry, Ohio everyman John Kasich and Arkansas preacher Mike Huckabee. They also had several sitting senators on tap such as the Latino man of the future Marco Rubio, the conservative firebrand Ted Cruz and the libertarian iconoclast Rand Paul. And to round out the team they had former silicon valley executive Carly Fiorina and a world-renowned African-American neurosurgeon. Oh, and there was reality TV celebrity Donald Trump. You have to admit that on paper it looked like an impressive line-up.

Meanwhile, the Democrats were coming off of eight years in the White House and were assumed to be tired and spent, recycling a candidate who had come close in 2008 and was simply seen to be the next in line. There was one governor nobody had heard of and a socialist protest candidate. With all that talent on the GOP side and so little on the Democratic side, many people assumed this was going to be the Republicans' year.

Well, that didn't work out so well. The GOP's deep bench turned out to be a bunch of dull-witted duds who were knocked off one by one by a man who literally had no idea what he was talking about and gleefully turned their primary into a circus. And on the other side Hillary Clinton and Bernie Sanders staged a spirited campaign of ideas with the first consolidating the multi-racial/ethnic Obama coalition and the other bringing a new generation into the party.

We're now on the cusp of the general election campaign with Hillary Clinton as the presumptive nominee, a highly experienced politician and government official and the first woman in American history to earn that honor. The Republicans have a crude, racist with fascist tendencies who embarrasses them on a daily basis.

And as we survey the two parties it's clear that the Republicans have more problems than just their dangerous and clownish nominee or their out-of-control Tea Party base. They have no one with any gravitas to speak up for their candidate as he goes out on the trail. Mitt Romney isn't going to do it. He is the national spokesman for #NeverTrump. Paul Ryan is dancing as fast as he can to try to keep the party together without blowing up his own future in the process. And who else is there? Jeb Bush? Not gonna do it. George W. Bush? No way. John McCain? He's fighting for his own seat and may just lose it. At this point, the only people with any enthusiasm for the GOP nominee are Newt Gingrich and Sarah Palin. Feel the magic.

Meanwhile, look who the Democrats have on tap. First there is the president, who is currently enjoying a 53% approval rating, up three points in the last month. (Compare that to George W. Bush's 29% approval rating at this time in his second term.) And among Democrats, he is extremely popular, with 88% approving of his job performance. Yesterday, he released a full-throated Clinton endorsement, promising to put everything he has into her election campaign:

For more than a year now, across thousands of miles and all 50 states, tens of millions of Americans have made their voices heard. Today, I just want to add mine. I want to congratulate Hillary Clinton on making history as the presumptive Democratic nominee for president of the United States.

Look, I know how hard this job can be. That’s why I know Hillary will be so good at it. In fact, I don’t think there’s ever been someone so qualified to hold this office. She’s got the courage, the compassion, and the heart to get the job done. And I say that as someone who had to debate her more than 20 times. Even after our own hard-fought campaign, in a testament to her character she agreed to serve our country as secretary of state.

From the decision we made in the situation room to get Bin Laden, to our pursuit of diplomacy in capitals around the world, I have seen her judgement, I’ve seen her toughness, I’ve seen her commitment to our values up close. I’ve seen her determination to give every American a fair shot at opportunity, no matter how tough the fight was. That’s what has always driven her. And it still does. So I want those of you who have been with me from the beginning of this incredible journey to be the first to know that I’m with her. I am fired up, and I cannot wait to get out there and campaign.

He then congratulated Senator Sanders and his followers saying they had brought important issues to the forefront of the campaign and expressed confidence that the party was going to come together to defeat the Republicans. According to the latest NBC/WSJ poll, 82% of Sanders voters approve of President Obama so his words about unity will undoubtedly carry some weight.

But the President is just the first among many superb surrogates who are going to be enthusiastically hitting the trail for Clinton. Yesterday one of the top leaders of the progressive wing of the party, Sen. Elizabeth Warren, gave Hillary Clinton a ringing endorsement:

Hillary Clinton won. And she won because she’s a fighter, she’s out there, she’s tough. And I think this is what we need. Look at who she is: For 25 years, she’s been taking the incoming. The right wing has thrown everything they possibly can at her. And what does she do? A lot of people would just hang up their spurs, say you know, I’ve had enough of this. And she doesn’t. What she’s done is she gets back up and she gets back in the fight.

Warren is one of the most popular Democrats in the country and is widely being discussed as a possible VP choice, which would electrify the party. She too promises to be out on the trail stumping for Clinton and other Democrats. If her speech to the American Constitution Society last night is any example, it's going to be exciting. Here's a little taste:

Trump tells everyone who will listen that he’s a great businessman, but let’s be honest — he’s just a guy who inherited a fortune and kept it rolling along by cheating people.

When that’s your business model, sooner or later you’re probably going to run into legal trouble. And Donald Trump has run into a lot of legal trouble. Ah, yes — Trump University, which his own former employees refer to as one big “fraudulent scheme.”

That's just for starters. Warren has a way of getting under Trump's thin skin and she seems to really enjoy it. She'll be drawing his fire for the next five months and giving it right back.

Then there is Vice President Joe Biden who also endorsed Clinton yesterday and can be expected to be very active on the campaign trail. He's very popular and while he has a different style, is equally effective at attacking the opposition. He too went after Trump at last night's American Constitution Society gathering:

I find Donald Trump's conduct in this regard reprehensible, evidenced by the bipartisan condemnation of the action for what it is: a dangerous attack on a vital pillar of democracy, the independent judiciary, by threats of intimidation and undercutting the legitimacy of a judge by suggesting that because of his heritage he is incapable of being fair.

"In addition to this, it is racist. But it's not the racism that frightens me. We've dealt with racists before. It's the potential impact on the court.

Michelle Obama will undoubtedly be stumping for Democrats and giving more of the same sharp criticism of Trump and the Republicans as she did at her recent commencement speech address:

Here in America, we don’t give in to our fears, we don’t build up walls to keep people out, because we know that our greatness has always depending on contributions from people who were born elsewhere but sought out this country and made it their home.

Needless to say, former President Bill Clinton whose surrogacy for Obama in 2012 has been widely considered to be tremendously effective,will continue to be out there making the case for Hillary. His speech at the convention that year was masterful and he remains very popular among the Democratic rank and file.

Finally, there is Senator Bernie Sanders. He remains in the race as of now and could theoretically remain in it until the convention. But regardless of the timing or the circumstances, he has made it very clear that he will do everything in his power to ensure that Donald Trump does not become president. His voice on the trail will be a powerful counterpoint to Trump's arrogant nationalism.

That's just the top of the bill. There are dozens of others who will be on the trail on behalf of Clinton and rest of the Democrats. Meanwhile, Republicans in tough races are going to boycott their own convention and many of those who do show up have been saying they do not plan to speak on behalf of Trump. The contrast couldn't be more obvious.

Trump can pull big crowds and the TV networks are happy to broadcast his every utterance so perhaps it won't matter.  But at this point it looks as though Trump not only doesn't have a deep bench, he doesn't have a team at all. Clinton, on the other hand, has a very politically talented group of surrogates ready to take the field. They're not even playing the same game.