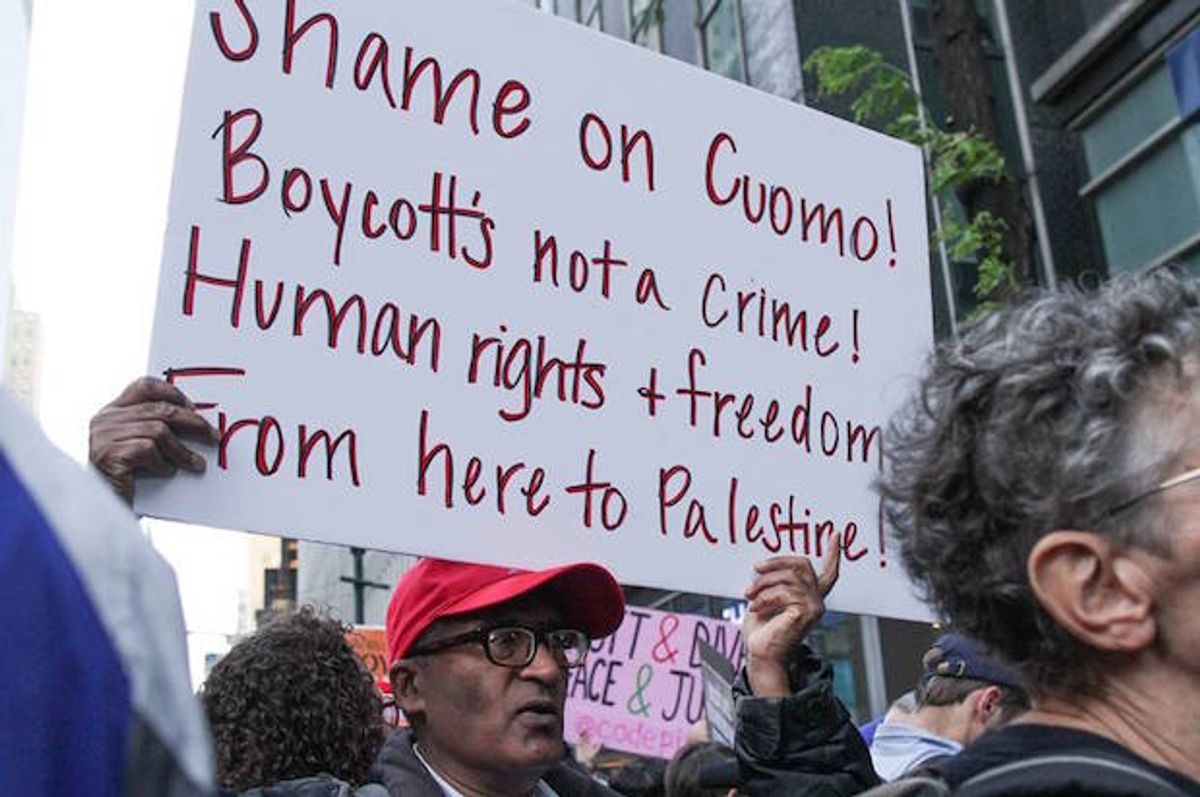 Hundreds of New Yorkers gathered outside the office of New York Gov. Andrew Cuomo on Thursday, protesting a new pro-Israel policy that legal groups warn is "McCarthyite" and unconstitutional.

Cuomo signed an executive order this weekend that punishes institutions and companies that support a boycott of Israel on behalf of Palestinian human rights.

Baher Azmy, legal director at the Center for Constitutional Rights, called the new policy "plainly unconstitutional in its McCarthyist vision."

More than 300 protesters joined the demonstration on Thursday, calling on Gov. Cuomo to rescind the executive order.

Jewish Voice for Peace, a social justice group that co-organized the protest, blasted Cuomo's executive order as an unconstitutional "attempt to repress the growing movement for Palestinian rights."

"The overwhelming turnout for this protest speaks to the fact that our political leadership is increasingly out of touch with its constituents," Beth Miller, an activist with the New York City chapter of Jewish Voice for Peace, or JVP, told Salon.

"The sidewalks and streets were packed with hundreds of people, standing literally toe-to-toe, to send the clear message that we refuse to be silenced," she added. They carried an array of signs and banners. Many expressed solidarity with past struggles.

One man held a sign that read, "Boycott worked in Montgomery and South Africa, and it will work in occupied Palestine." Montgomery refers to a city in Alabama where a 1955 bus boycott helped kick off the civil rights movement. JVP stresses that the "Palestinian-led civil society BDS movement is modeled on the global campaign that helped bring an end to apartheid in South Africa."

BDS refers to the Boycott, Divestment and Sanctions, an international grassroots movement that promotes nonviolent economic means to pressure Israel to comply with international law and cease its violations of Palestinian human rights. The global campaign was called for by Palestinian civil society in 2005.

Many veteran leaders in the struggle against U.S.- and Israel-backed apartheid in South Africa have endorsed BDS.

"The signs we held and messages we wanted to convey — such as 'We will continue to boycott for justice until Palestinian refugees can return to their homes and land' — reflect the many ways Israel is violating basic principles of human rights and international law," said Donna Nevel, an activist with Jews Say No!, another group that helped organize the demonstration.

These are "the reasons that the BDS movement is so critical," Nevel told Salon, stressing that BDS can help pressure Israel to change its illegal policies.

Gov. Cuomo's Executive Order No. 157 declares that “the State of New York will not permit its own investment activity to further the BDS campaign in any way, shape or form, whether directly or indirectly.”

The new order, in its own language, establishes “a list of institutions and companies that… participate in boycott, divestment, or sanctions activity targeting Israel, either directly or through a parent or subsidiary.”

Cuomo summarized the new policy: “If you boycott Israel, New York will boycott you.”

JVP Executive Director Rebecca Vilkomerson published an op-ed in The New York Daily News on Thursday warning that Cuomo's executive order will "set a dangerous and likely unconstitutional precedent for governments to deny groups financial opportunities and benefits because of their exercise of First Amendment-protected political speech."

"When a chief executive unilaterally signs an executive order declaring that the state blacklist and divest from companies and organizations with a particular political view, we usually call that state repression," she said.

At the protest outside Gov. Cuomo's office, activists articulated many of the important reasons that a boycott is necessary. They carried a large banner that read "We will continue to boycott for justice until...", which was accompanied by smaller signs that listed reasons for boycotting Israel. "Despite being planned at a very short notice, the protest had a robust turnout and a powerful presence by hundreds of outraged human rights advocates," said Hani Ghazi, a member of Adalah-NY, the New York Campaign for the Boycott of Israel, the third group that co-organized the demonstration.

Ghazi, a Palestinian American activist, told Salon, "We expect the governor to be democratic and to protect our right to free speech and to practice honorable and nonviolent activism."

"We expect him to side with his constituents, the people of New York, and not with wealthy corporations that profit from, and institutions that comply with, Israel’s human rights abuses, international law violations and other apartheid policies," he added.

One protester even donned an enormous papier-mache head that looked like Cuomo's.

"Gov. Cuomo can’t wish away the First Amendment with an executive order," she told Salon on Monday. "It’s clear that Cuomo is bypassing the legislative process in order to muzzle morally-driven positions protesting systemically discriminatory state policies and a military occupation that is 49 years old this week."

“As with the constitutionally faulty legislation that was pending in Albany, this Executive Order may not infringe — directly or indirectly — on the rights of New Yorkers to engage in constitutionally protected boycotts to effect economic, political or social change,” she added.

Palestine Legal issued a statement calling the executive order “a blatantly unconstitutional attack on freedom of speech [that] establishes a dangerous precedent reminiscent of McCarthyism.”

Riham Barghouti, another activist with Adalah-NY, accused Cuomo of acting undemocratically in order to implement an unpopular pro-Israel policy.

"Like other politicians, Gov. Cuomo is finding that blind support of the Israeli apartheid state requires repressive, undemocratic measures," Barghouti said. "He is attempting to silence the growing number of morally conscientious individuals and organizations that support freedom, justice and equality for Palestinians."

"We, along with our allies, demand that Gov. Cuomo rescind this order punishing supporters of Palestinian rights and BDS," she added. Anti-boycott legislation has been introduced in more than 20 states throughout the U.S. Bills that are likely unconstitutional have been passed in nine states.

Sen. Chuck Schumer heaped praise on Cuomo for his executive order. The New York senator said he is “looking at introducing a federal law to do the same thing” across the country.

Activists say Thursday's protest was the first action in a new campaign to pressure the governor to repeal the order.

"This is a new low for the state-sanctioned backlash against the movement for Palestinian human rights," Nic Abramson, an activist with Jews Say No!, said in a statement.

Abramson emphasized that the Palestinian solidarity movement "is growing and strengthening daily."

JVP stands by the BDS movement. Vilkomerson, the executive director, defended BDS in Salon in February, warning that she and her organization were on the verge of being blacklisted.

“We act in solidarity with the Palestinian call for international grassroots pressure on Israel until it complies with international law and ends its ongoing repression of Palestinian rights," explained JVP activist Gabrielle Spears in a statement.

She emphasized, "We will continue to boycott Israel until Palestinian children can live without fear of imprisonment and torture, until there are no longer separate roadways for Israeli Jews and Palestinians, until Israel stops bombing and killing Palestinians, and until the checkpoints and apartheid wall are dismantled.”