Oxfam calls on wealthy nations to help more, especially given their role in fueling the worst crisis since WWII 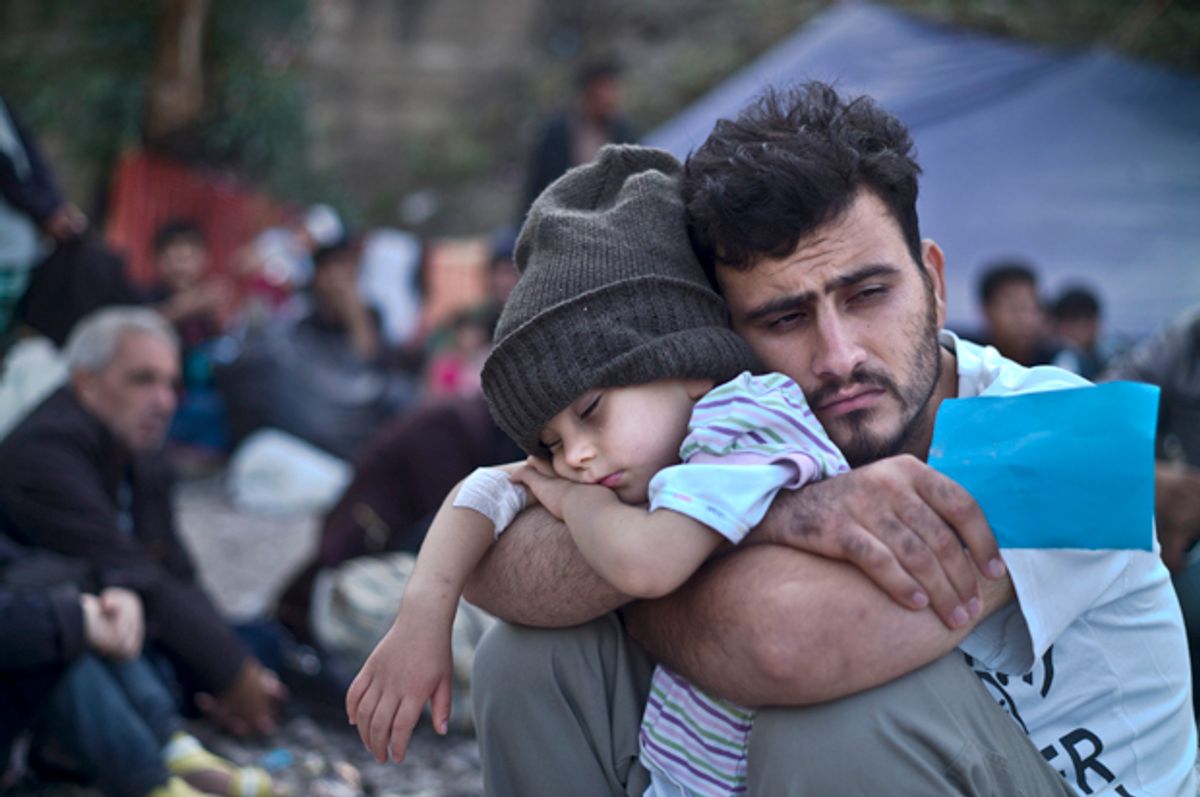 Those who oppose admitting more refugees in Western countries often ask why other countries aren't taking them. The reality is they are.

In fact, the five wealthiest countries — which make up half the global economy — are hosting less than 5 percent of the world’s refugees, while 86 percent of refugees are in poorer developing countries that are often struggling to meet the needs of their own people.

These are the findings of a new report by Oxfam, titled "Too small a welcome from the world’s wealthy."

Together, the U.S., China, Japan, the U.K. and Germany are hosting less than 1 million refugees. These five richest countries have taken 938,231 people, or 4.8 percent of the world’s 19.5 million refugees, even though they boast just over one-half of the cumulative global GDP.

The five countries that have taken the most refugees, on the other hand, are all developing nations. Together, Jordan, Lebanon, Turkey, Pakistan and the Occupied Palestinian Territories host a staggering 50 percent of the world's refugees, even though they make up less than 1.5 percent of the world’s economy.

Japan has taken by far the least, with China and the U.S. following behind. The tiny nations of Jordan and Lebanon have taken by far the most, with one refugee for every roughly three or four people in their countries.

"The world's richest countries can and should do much more to help the world’s most vulnerable people who have fled their homes because of violence and conflict," Oxfam stressed.

The international aid organization blasted the "dangerous trend of governments turning their backs on the world’s most vulnerable people and failing to uphold the spirit and the international law they claim to champion."

Oxfam is launching a new campaign to pressure leaders in the world's wealthiest countries to welcome more refugees and to do more to help and protect them.

The world is witnessing the worst refugee crisis since World War II. More than 60 million people have fled their homes because of violence, war and human rights violations, according to the U.N.

Approximately one-third of the world's 60 million displaced people are external refugees, whereas roughly two-thirds are internally displaced in their own countries.

The largest refugee populations come from Syria, Iraq, South Sudan, Yemen, Burundi, Nigeria and the Central African Republic. The wars and conflicts in many of these countries have been inflamed by some of the world's wealthiest nations.

That is to say, the rich countries that have contributed the most to fueling the refugee crisis have taken the fewest refugees, leaving the responsibility to significantly poorer countries.

Oxfam acknowledges this in its report, noting that all of the conflicts refugees are fleeing "are man-made," while "neighboring states and rich countries further afield sometimes fuel those wars by supplying arms."

Meanwhile, there is little sign that the disparity will get any better. In all of 2014, the five richest countries resettled just 53,029 people, as the number of displaced people in the world soared.

In March, the E.U. and Turkey reached an agreement to deport refugees and migrants in Europe en masse to Turkey, where rights organizations say their lives may be endangered. The U.N., rights groups and legal experts have blasted the deal as illegal and immoral.

Oxfam condemned the E.U.-Turkey agreement, writing, "It trades human beings for political concessions, flying in the face of at least the spirit if not the letter of the 1951 Refugee Convention, the legal document which defines the rights of refugees and responsibilities of governments to protect them."

"By trading refugees for political concessions, the E.U.-Turkey deal fails to respect the spirit of international and E.U. law," Oxfam stated.

Other countries have cited Europe's anti-refugee positions to justify their own, Oxfam noted. In May, Kenya closed the Dadaab camp for refugees, arguing that, if Europe was allowed to turn away Syrians, it could turn away Somalis.

"This all puts some of the most vulnerable people in the world in dangerous and frightening situations," the international aid organization said.

"The refugee crisis is exposing the shallowness of governments’ commitment to the international law they claim to champion," Oxfam added.

"Those who are forced to flee often face treacherous journeys before they reach a safe haven," Oxfam warned in its report.

These dangerous trips have separated countless families, left refugees penniless, forced many people into shoddy shelters and crowded camps, trapped asylum-seekers in permanent unemployment, disrupted children's education and led to an explosion in exploitation, prostitution and even slavery.

In 2015 alone, more than 5,400 people died in these treacherous journeys to find asylum.

In the first five months of 2016, at least 2,776 people lost their lives in search of refuge, putting the tragedy in this year on the path to exceed that of the previous one.

"Those lucky enough to survive often end up living in squalid conditions without enough clean water or food and face hostility, discrimination and abuse with governments doing little to help," Oxfam said.

Refugees have been so desperate they have staged protests in which they light themselves on fire or sew their lips shut.

The international aid organization stressed, "Wealthy countries must also substantially increase their support for developing countries that are sheltering the majority of the world’s refugees."

Even within the five wealthiest countries, the differences in the response to the refugee crisis have been stark.

Japan has taken the fewest refugees per capita, by far, adjusted for the size of the population using CIA World Factbook figures.

Although it has a population of 127 million, Japan is hosting just 2,419 refugees, or one refugee for every roughly 52,500 people.

With the third-worst response of the wealthiest nations, the U.S., which has a population of 321 million, is hosting 267,222 refugees, or one refugee for every roughly 1,200 people.

And Germany, which stepped up in response to the refugee crisis, has a population of 81 million, and is hosting 250,000 refugees, or one refugee for every roughly 325 people.

Oxfam's figures do not include people whose asylum claims are currently pending. In Germany, 476,649 people applied for asylum in 2015, any many applications are still being processed.

On the other side, the situation could hardly be more different.

Jordan, which has a population of just 8.1 million, is hosting a staggering 2,781,463 refugees, or one refugee for every roughly three people.

Following closely behind, Lebanon, which has a population of just 6.2 million, is hosting 1,625,057 refugees, or one refugee for every roughly four people.

These two tiny Middle Eastern nations are taking by far the most refugees in the world, per capita.

Turkey, which has a larger population of 79 million, is hosting a sizeable 1,838,848 refugees, or one refugee for every roughly 43 people.

There are 2,051,096 registered refugees in the Occupied Palestinian Territories.

Oxfam's report uses figures from the U.N. High Commissioner for Refugees, or UNHCR, along with economic metrics from the World Bank. Its figures exclude people with asylum claims that are currently pending.

The total number of refugees includes the 5.1 million Palestinian refugees who are registered by UNRWA, after roughly two-thirds of the Palestinian population was expelled during the creation of Israel in 1948. The other 14.4 million refugees are under the mandate of the UNHCR.