Donald Trump somehow thinks he can swipe the bluest of states, including California and New York, from Hillary 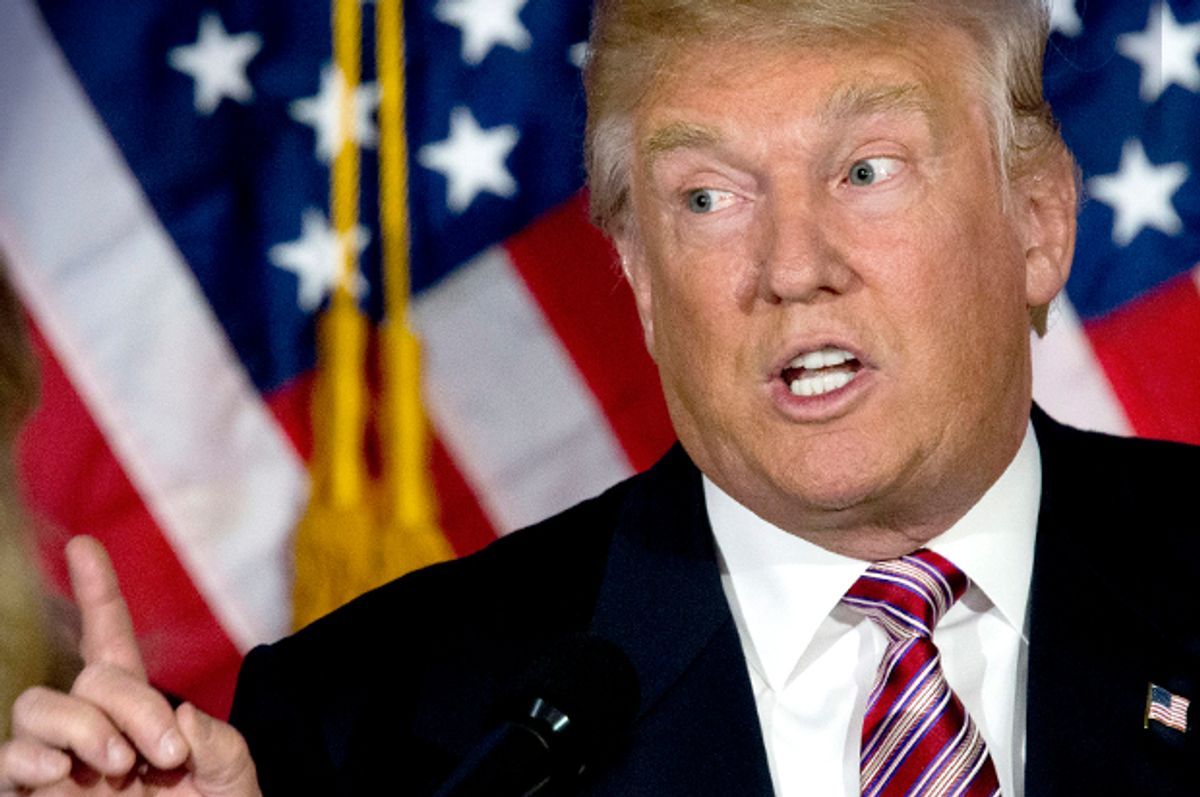 Donald Trump announced a couple of weeks ago that he intends to target and win the state of California and its 55 electoral votes in November. It is a measure of how badly a year of writing about this election has fried my brain that my first reaction was, “Forcing Hillary Clinton to spend time and money defending this reliably blue state is not a bad strategy.”

Because it is terrible strategy, not only for a Republican presidential candidate but also for a guy who wants to keep his campaign operations relatively lean and not spend a ton of money. California is too big, too blue, and the state’s Republican Party has all the heft and impact of a Whiffle ball. The state hasn’t voted for a Republican for president since George H.W. Bush in 1988. It has a large Latino population, a group with which he polls very badly thanks to his outright racism. No polling operation that I can find has it on a list of potential toss-ups.

California is not the only reliably blue state Trump is making noise about winning. At a meeting with Republican bigwigs on Thursday, he allegedly said that he also intends to put New Jersey and Maryland in play. Like California, neither of those states has gone for a Republican since Bush in 1988. In Jersey, he is likely banking on the political prowess of one-time rival and his current valet Chris Christie, the state’s governor. Apparently he won’t be deterred by Christie’s historic unpopularity in his own state.

Then, of course, there is New York. Another reliably blue state, one that elected Clinton to the Senate twice. By all accounts, Trump covets New York. Not only is it his home state, it would be a humiliation to Clinton if Trump could be the first Republican presidential candidate to win it since Ronald Reagan’s landslide in 1984.

Trump famously has claimed he does not need any pollsters because he can get a sense of the numbers from reading whatever clickbait Drudge poll results his staff prints out for him. But he hired one exclusively for New York. And he has tasked sentient pile of rocks Carl Paladino, last seen getting absolutely destroyed by Andrew Cuomo in the state’s 2010 gubernatorial election, with bringing the state to him. (Paladino’s strategy of blanketing the state with Trump yard signs and bumper stickers should have Peggy Noonan’s guts stirring if she ever ventures north of 110th Street.)

So why is Trump determined to make a play for these states when his chances of winning them are basically nil? Why waste the time and resources? He’s already starting with a floor of somewhere close to 200 electoral votes from reliably red states that will vote Republican no matter the candidate. He’s also planning to make a strong play for Ohio, Pennsylvania, and Florida, all toss-up states. Why not concentrate on winning more of those battleground states?

Jonathan Chait had a short blog post on Thursday writing Trump’s strategy off as being of a piece with the rest of Trump’s campaign – scattershot and impulsive, lacking any real strategic vision. On Twitter, Benjy Sarlin of MSNBC speculated that Trump will spend time in California in an effort to bait hardcore protestors into doing something dumb in front of the television cameras, much like the unrest that hit one of his rallies in San Jose last week and the state’s Republican convention in Anaheim in May. This theory, I guess, means that voters will see leftists (and presumably Clinton supporters) as savage creatures who should not be in charge of the country, and who can be tamed by a law-and-order lover like Donald Trump. Shades of the protests at the Democratic convention in 1968 that helped send Richard Nixon to the White House.

I think Sarlin gives Trump too much credit for strategic thinking. For whatever savviness brought him the nomination, you also have stories like this one, where his “strategy” for dealing with the furor over his attacks on the judge overseeing the Trump University lawsuit against him was to tell his surrogates to call reporters “the real racists,” an approach that might work for winning an argument in a Twitchy comments thread but has zero applicability on the rest of Planet Earth.

No, there is one reason why Trump wants to win California, and that is to satisfy his insatiable ego. It’s the largest state in the country, with nearly 40 million residents. It’s considered impregnable for a Republican candidate, the playground of Hollywood liberals and San Francisco hippies. It has the largest number of electoral votes. Trump probably looks at it the way he might have looked at the Manhattan real-estate market in the early 1970s, or the way he looked at the presidency itself when he was first considering running: As something to conquer, a trophy to drag back to his Trump Tower penthouse and nail to the wall. No Republican has won California in almost 30 years? Well, no Republican named Donald J. Trump has run before!

It’s absurd, but why assume Trump cares about anything more than bragging rights? Those are pretty much his main motivator for everything else, which is why his business is mostly one of branding, of slapping his name on any old consumer good and proclaiming it the best by dint of his association with it. So even if a strategy of “less is more” would be more beneficial to him, he is constitutionally incapable of pursuing it. His choice of states to target in November’s election won’t be any different.