Watch Elizabeth Warren burn it all down in epic takedown of "thin-skinned, racist bully" Donald Trump: "He will never be President of the United States"

Warren is expected to endorse Hillary Clinton on Thursday -- but first, she absolutely torched Trump 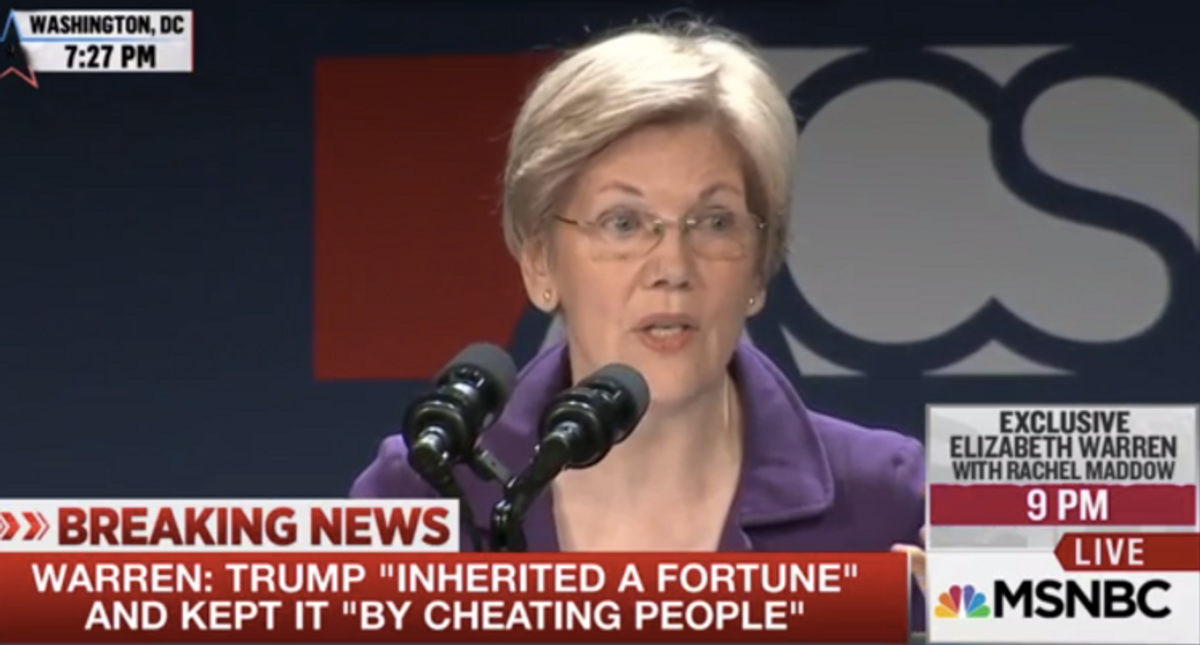 The coalescing of the Democratic Party after a long presidential primary season officially began two days after Hillary Clinton claimed the nomination, with double endorsements from President Barack Obama and perhaps the most popular Democratic senator, Elizabeth Warren, who then promptly delivered a barnburner of a speech taking down Republican presumptive nominee Donald Trump.

"Donald Trump is a loud, nasty, thin-skinned fraud who has never risked anything for anyone and serves nobody but himself," Warren said in a speech to the American Constitution Society, a progressive legal organization, Thursday night. "And that is just one of the many reasons why he will never be president of the United States.”

It is expected that Warren will officially endorse the former secretary of state on MSNBC's "Rachel Maddow Show" Thursday night.

Warren went on to forcefully call out Trump as a "racist" and “a small, insecure thin-skinned wannabe tyrant."

“Trump isn't a different kind of candidate," Warren told the crowd, hanging the orange albatross on the necks of the entire Congressional Republican leadership. "Donald Trump chose racism as his weapon, but his aim is exactly the same as the rest of the Republicans."

"He’s a Mitch McConnell kind of candidate," she explained. "Exactly the kind of candidate you’d expect from a Republican Party whose ‘script’ for several years has been to execute a full-scale assault on the integrity of our courts,” she told the gathered progressive legal minds, arguing that Trump's and the GOP's aim is to "pound the courts into submission to the rich and powerful”:

Trump is also House Speaker Paul Ryan’s kind of candidate. Paul Ryan condemned Donald Trump’s campaign for its attacks on Judge Curiel’s integrity. Great. Where’s Paul Ryan’s condemnation of the blockade, the intimidation, the smears and the slime against the integrity of qualified judicial nominees and Judge Garland? Where is he? Yeah. Paul Ryan and Mitch McConnell want Donald Trump to appoint the next generation of judges. They want those judges to tilt the law in favor of big businesses and billionaires like Trump. They just want Donald Trump to quit being quite so vulgar.

“You shame yourself and you shame this great country,” Warren concluded. "You, Donald Trump, are a total disgrace."