Chuck Klosterman predicts the future: "Chemotherapy will seem like bleeding people with leeches"

Salon speaks to the author about his new book, "But What If We're Wrong?" Nirvana, Philip K. Dick and Billy Joel 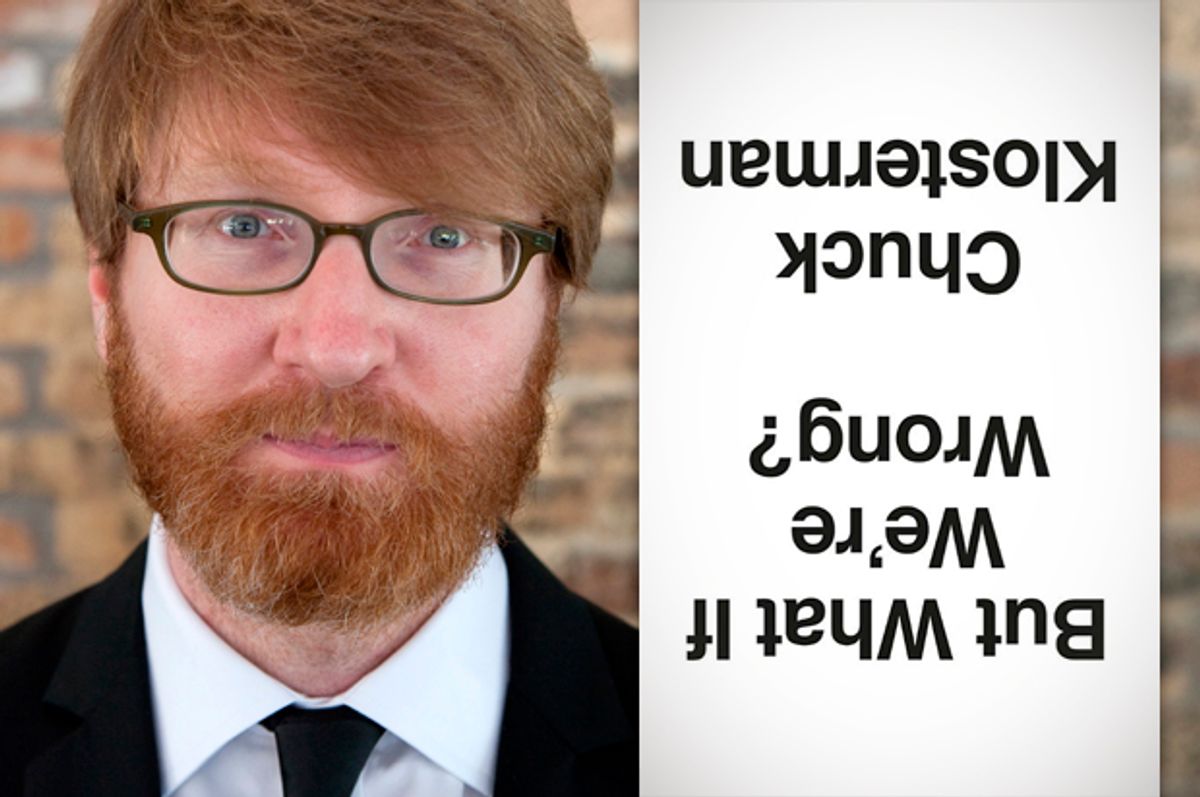 The new book by author Chuck Klosterman is a blast – but the thrill it provides comes alongside a weird kind of insecurity. The title, after all, is “But What If We’re Wrong?”, and its premise is that in future generations, our certainties about science, about the best movies, about the writers we think matter – just about all of our judgments – might be considered nonsense.

Whether it’s gravity, which people as smart as Aristotle were completely wrong about, or “Moby Dick,” a novel largely ignored in its own time, we’ve been wrong before. So what’s next? What aspects of our own lives will end up being poorly judged or simply erroneous a century or two from now. To try to puzzle it out, Klosterman interviewed a varied crew including scientist Neil deGrasse Tyson, New Yorker journalist Kathryn Schulz, novelist Junot Diaz, and filmmaker Richard Linklater.

This book is so intriguing I am willing to forgive Klosterman his previous advocacy of Billy Joel.

We spoke to the New York-based Klosterman from Washington, which he was visiting for an appearance at the bookstore Politics & Prose. The interview has been lightly edited for clarity.

Talk about whichever genre you want – do you have a sense of a writer, musician, filmmaker, or whatever whose reputation could be way bigger centuries from now? It could be someone we haven’t even heard of, right? Could the signature novelist or band or whatever from the early 21st century be someone who’s almost entirely obscure?

What we’re really talking about is someone writing about an idea that, right now, is a fringe idea. Or a difficult idea for the average person to relate to. Or something that seems very specific to him or her – and yet, in the future, when this work is rediscovered, that idea will now be normative.

With the case of “Moby Dick,” for example, here’s a book that gets mixed reviews and doesn’t sell that well, and probably seems like a book about a very specific kind of experience that a lot of people might have seen as distant. But then, when people return from World War I, a lot of what’s in that book seems applicable to someone who’s been fighting a war in Europe. That’s one of the reasons that book gets elevated. So we have to visualize that happening now, someone writing about something that in a hundred years will seem like it connects to everybody’s experience.

Like if in the 1920s, someone wrote a book about a technology that mirrors the Internet, that book would have been unpopular in the ‘20s…

It would have made absolutely no sense to them then.

Right. It’s why things like Philip K. Dick are more popular today than when he lived — he was literally ahead of his time in many ways. Not so much as a writer, but as a thinker.

Yeah, in that period, the ‘60s and ‘70s, he would not have been the writer whose work you’d have guessed would have become so significant — someone we’d see as describing the time we’d live in half a century later.

And also because as time moves on, someone’s technical ability, technical prowess matters less. Their ability to construct sentences, to play their instrument, to operate the camera … Those things matter less, because as we move forward, those things start to seem awkward, amateurish, however you want to look at it. So we go to the core of the concept. If you want to exist beyond your own timeframe, it has to do with the core of your ideas, not the way you execute them.

You’re saying that over time, craftsmanship fades as a criterion.

People still appreciate craftsmanship. And someone like James Joyce — he seems to live on purely through execution in many ways. The complexity of his writing is what people still appreciate. But that alone would not be enough. It also has to do with the fundamental ideas of being alive that he dealt with. That really matters more — so we care about the execution.

Lets talk for a moment about someone you’ve written about in the past: How will future generations view Billy Joel?

How far forward do you wanna go?

I would say, totally unknown. It’s not really a reflection on him in a specific sense. Two hundred years, you’re talking about multiple generations experiencing popular music — the number of people from the late 20th century in that genre, who can generate traction in generation after generation, is really small.

By the time we move 200 years into the future, most of the field of rock and pop will have fallen by the wayside — and it’s hard to create the argument that puts him in the class that keeps going. Dylan, Elvis Presley, Rolling Stones, obviously the Beatles, Chuck Berry, even the Six Pistols or Nirvana. Making these arguments for non-musical reasons — that’s a very big part of it.

It’s kind of a paradox, but to be a musician whose legacy lasts for millennia, you need to have a non-musical importance as well. And it’s difficult to see how Billy Joel sort of fits into that equation.

While you can say the Beatles and Dylan capture ‘60s rebellion, Chuck Berry represents postwar freedom… That sort of thing?

Or just the idea that it’s difficult for rock music to exist without those people. They’re kind of bedrock people within that structure. Nirvana is not a bedrock artist, but maybe they’re going to be the last really meaningful rock band.

The book is called “But What If We’re Wrong?” – so I could be wrong about this. It’s not like I’m saying everybody else is wrong and I’m right. But when I look at history, it seems like the key is having a secondary importance to your work that eventually becomes the primary importance.

You want to toss off a prediction, in any genre – science, music, film – of something that will seem ridiculous to people in the future? A hunch, even?

I’m not the only person who says this, but I think it’s plausible: If we ever get to a point in medicine – and I assume that we will – where we have a better way to combat cancer, maybe with genetic engineering or something, I would not be surprised if chemotherapy will seem like bleeding people with leeches. It will seem crazy that we poisoned people to make them better.

That doesn’t mean that chemotherapy is crazy. It’s the best avenue we have right now. But, in 300 years it will be hard to illustrate that to people, especially since everyone who understands chemotherapy will be dead.

They’ll say, “Can you believe in the 20th century they used to do this?”

Yeah, they’ll simplify the idea down to: We were just pumping poison into people because we had no other guess.