The GOP must be proud: When your party's nominee is the darling of white supremacists 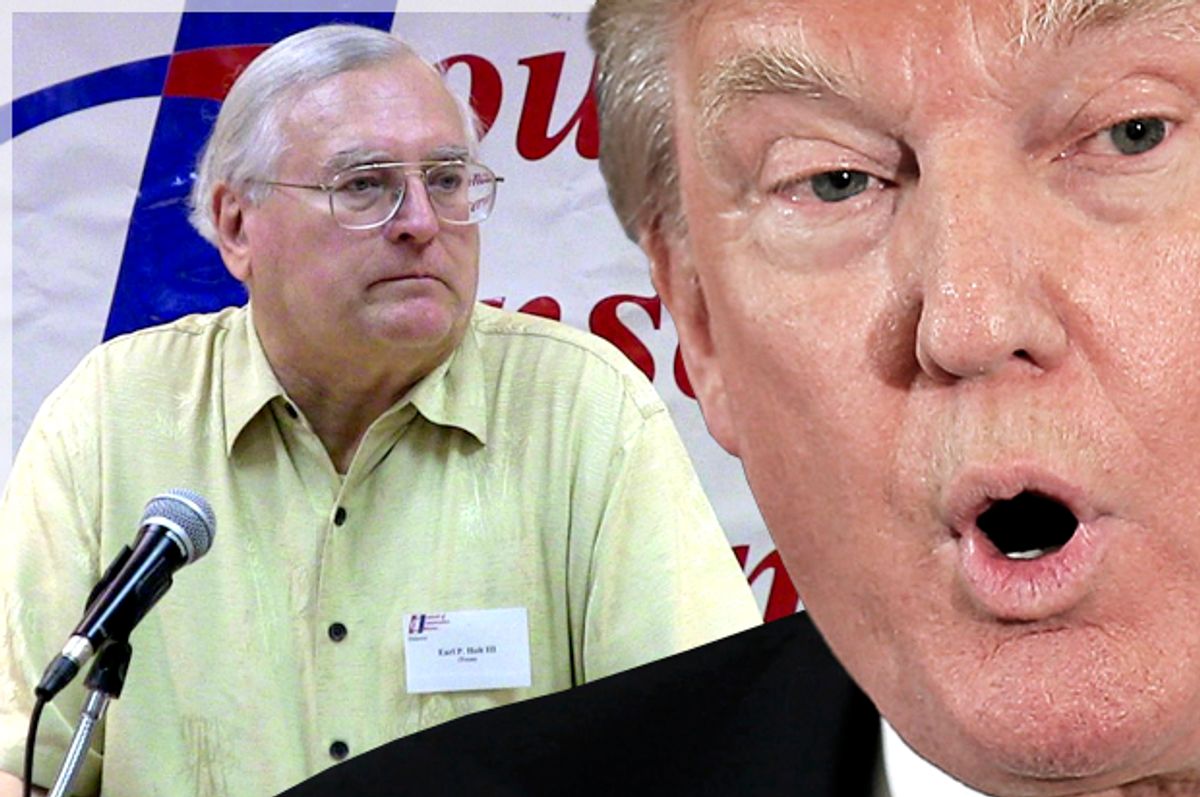 It’s no surprise that white supremacists love Donald Trump. For the first time in decades, a presidential nominee is stating explicitly what many in the Republican Party have been dog-whistling for years: that people of color are subhuman, that immigrants aren’t welcome, that white men have the divine right to run this country.

Whites are under attack, even genocide, think the white nationalists, and Trump is the man to prevent it.

William Johnson is head of the white nationalist American Freedom Party, which was formed in 2009 by “racist Southern California skinheads” and has called Trump “The Great White Hope.”

In 1985, Johnson proposed an amendment to the U.S. Constitution that would revoke the citizenship of any nonwhite or Hispanic white American. Weirdly, he studied Japanese in college and most of his corporate law firm’s clients are Japanese and Chinese. I guess it’s fine to make money off of people of color, just don’t give them citizenship -- and definitely no interracial dating!

The American National Super PAC, formed last September, ran robocalls supporting Trump in Iowa, New Hampshire, Minnesota and Vermont during the first quarter of this year, spending about $13,000. Johnson personally provided most of the funding. The PAC booked $6,000 worth of robocalls in Wisconsin, coming after the first quarter, so in July we'll find out who has funded and produced these calls.

“The white race is dying out in America and Europe because we are afraid to be called ‘racist,’” narrates Johnson in one of the calls. “Don’t vote for a Cuban. Vote for Donald Trump.”

Another call features white supremacist Jared Taylor, founder of the white nationalist think tank American Renaissance; spokesman for the Council of Conservative Citizens, a white nationalist hate group; and member of the American Freedom Party’s board of directors.

“We don’t need Muslims,” he says. “We need smart, well-educated white people who will assimilate to our culture. Vote Trump.”

So who made these robocalls happen? From American National Super PAC’s first-quarter report to the Federal Elections Commission, I found some interesting individuals involved in making the ads. Connected white nationalists, people whose views align nicely with white nationalists’, or simply those who don’t mind taking a paycheck from a racist organization, are mobilizing for Trump, collaborating on political ads to support him.

Here is the cast of characters:

Besides Johnson, the only other funder of the first-quarter robocalls was Earl Holt, who contributed $500 and is president of the Council of Conservative Citizens. Dylann Roof credited Holt's ideas for inspiring his Charleston massacre.

The super PAC paid $1,500 to Laura Burton of Columbia, South Carolina for consulting. She is the treasurer for Robert Whitaker's presidential campaign. When you can get paid by one white nationalist, why not two?

Whitaker, once worked in the Reagan administration, was formerly the American Freedom Party’s own 2016 presidential candidate, but the party endorsed Trump because he clearly has a chance to become president. In April, after Johnson ran the robocall campaign for Trump, Whitaker withdrew as the AFP nominee. Now running as an independent, his campaign slogan remains: “‘Diversity’ is a codeword for white genocide.” His campaign site presents “The Mantra,” which eerily addresses “a final solution to the black problem.”

Sam Bushman was hired for consulting, earning $211. Bushman is a conservative radio host who had Donald Trump, Jr. on his show, interviewed by frequent host and white nationalist James Edwards. A racist and an anti-Semite, Edwards is a member of the American Freedom Party and a national board member of the Council of Conservative Citizens.

Clarence Mason, a former Black Panther, was paid $300 for consulting. The Missouri resident is a black author and speaker who now believes that liberalism is slavery and that blacks should stop “whining” about having been enslaved. He told The Daily Caller that Black Lives Matter is “garbage” and that “Barack Obama hates America.”

Johnson was in fact named a California delegate for Trump, as Mother Jones first reported. The Trump campaign attributed this to a “database error,” and Johnson resigned as a delegate a few days later. But Johnson has now asked the Trump campaign if he can attend the Republican National Convention as a volunteer. And the American Freedom Party claims it has more Trump delegates who have slipped through the cracks, along with other “white pride” proponents such as Chicago mortgage banker Lori Gayne.

This merry band of racists is cheering for and spending money to benefit Trump, the Republican nominee for president. And despite constant racist language from Trump himself and myriad endorsements from KKK leaders and other unsavory white supremacists, the Republican establishment quickly rallied behind him when Cruz left the race.

What a disgrace: Establishment Republicans who planned to change their tune after 2012 and appeal to Latino voters (but who thought this would really happen?) are now going all in for an outright bigot who took over their party by appealing to an angry base they created. Trump’s supporters are driven most by racial resentment, according to a recent Pew Research study. It’s an embarrassment, but more seriously, a grave danger, that the GOP is willing to rally behind someone whose campaign depends on stoking white racism. And there are more white voters than previously believed, according to an Upshot analysis.

Regardless of whether white nationalist groups continue to advertise on Trump’s behalf, the candidate desperately needs white supremacists’ votes. Many are newly registered voters, and others have never voted for a member of a major U.S. political party. Trump knows this, which explains why, as he pivots to the center for the general election, he called out a judge presiding over his Trump University case because of his Mexican heritage just days before giving what may have been his first teleprompted speech. What Trump should have made clear is, I am racist against Mexicans, and since you have Mexican heritage, you might be biased against me in the case regarding my fraudulent university. Obviously, this is an absurd, and racist, reason to remove a judge from a case.

Trump may have had to pretend on national television that he didn’t “know anything about David Duke,” the former grand wizard of the Ku Klux Klan who endorsed him, but he consistently says and tweets things (like Mussolini quotes) that keep white racists enthusiastic about his potential presidency. These statements mixed in with his proposed ban on Muslims and wall at the Mexican border conveniently resonate with the Tea Party’s racist strain as well.

While Trump's university is being sued for fraud and presumptive Democratic nominee Hillary Clinton has a (very) slight chance of being indicted during an election that, perhaps, more blatantly than ever displays just how corrupt American politics are, only one candidate has the backing of white nationalists, neo-Nazis and other hate groups convinced that the white race is experiencing a drawn-out genocide.

Meanwhile, for the presumptive Democratic nominee, African Americans are reliable supporters and Latinos are registering to vote like never before to cast their ballots against Trump.