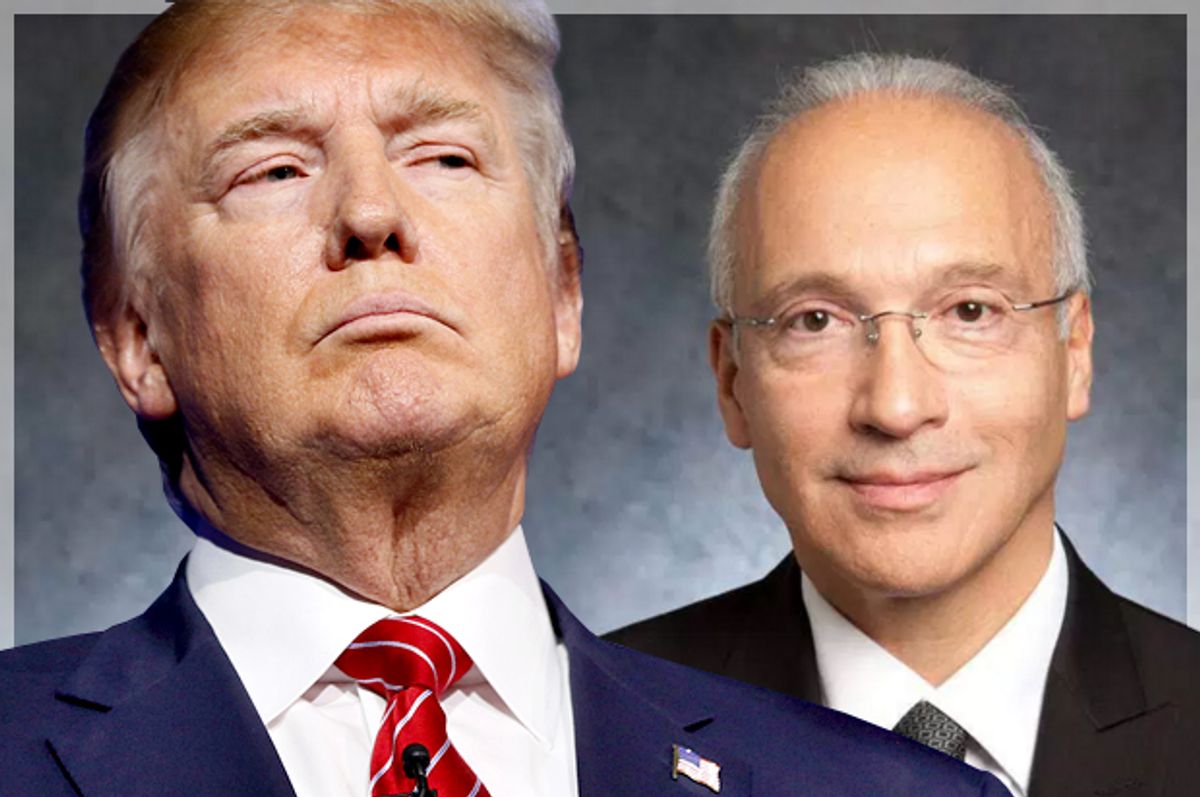 In his interview with Jake Tapper of CNN, Donald Trump argued that Judge Gonzalo P. Curiel, the federal judge overseeing one of the pending lawsuits against Trump University, should recuse himself from the case because of his Mexican Heritage.  During last Friday’s interview with Tapper, Trump opined, “Now, this judge is of Mexican heritage.  I’m building a wall, OK? I’m building a wall.  I am going to do very well with the Hispanics, the Mexicans.”  Trump did not back away from these remarks and, in fact, went on to claim the following in a subsequent Wall Street Journal interview: “I’m building a wall. It’s an inherent conflict of interest.”

Although Democrats and Republicans alike have denounced Trump’s comments, little attention has been paid to the contradiction that lies at the core of Trump’s assertion.  Trump cannot claim—at least without baldly contradicting himself—that he “is going to do very well with the Hispanics, the Mexicans” and that a federal judge—or presumably any judge—has an “inherent bias” against him because of his/her Mexican ancestry.  This central contradiction at worst reveals to us that Donald Trump singles out for unequal treatment certain racial or ethnic groups—the very definition of racism—or at best that he has a theory of judicial recusal that is unworkable and indefensible, ultimately undermining the rule of law.  Let me explain.

The underlying logic of Trump appears to be that Curiel is proud of his Mexican Heritage, and pride in one’s ancestry creates an inherent bias against anyone or anything perceived to be doing harm to other persons of that heritage.  According to Trump’s logic, which at one point he labels “common sense,”   Curiel is disposed to dislike or be biased against Trump because he is building a wall presumably to keep Mexicans (and other Hispanic immigrants) out of the United States, thus harming Mexicans in some way.  “I’m building a wall, OK?”  “He’s of Mexican Heritage and he’s very proud of it, as I am where I come from, my parents.”  But if one accepts the first premise of Trump — that one’s ancestry creates inherent bias — then it cannot follow that Trump will “do very well with the Hispanics, the Mexicans” or that “the Latinos love Trump and I love them.”

All Mexicans, well at least those proud of their ancestry (which I assume is most if not all), should be inherently biased against Trump, given his proposed wall-building policy.  It appears, then, that Trump is either disingenuous when discussing his support among Hispanics (and especially Mexicans) or that he does not really believe there is an inherent conflict of interest based on ancestry in this case.  Either way, there appears to be some degree of deception.  But perhaps I am giving Trump too much credit for recognizing the inherently contradictory nature of his claims; perhaps there is no perceived conflict between these claims in his mind.  Regardless, the public would be well-advised to acknowledge this contradiction, as well as the underlying logic of Trump’s argument and the consequences that follow from it.

If Trump sincerely believes that pride in ancestry creates an inherent conflict of interest under circumstances where judges must render decisions that affect persons who share their heritage or ethnic identity, why would Trump limit such claims of bias and conflict to ancestry or national origin?  Couldn’t one reasonably extend the underlying logic of Trump to, say, religion?  One’s religious beliefs undoubtedly play an integral role in shaping his/her worldview, perhaps even more than ancestry (though this, of course, varies with the individual in question).  So it should come as no surprise that Trump, in his interview this past Sunday with John Dickerson, expressed skepticism that a Muslim judge would be able to remain impartial if he/she had to decide a case that involved Trump, given Trump’s proposal for banning Muslim immigrants.

In his interview with Trump, Dickerson asked if a Muslim judge would likely be biased against him.  Trump responded, “It’s possible, yes. Yeah that would be possible.  Absolutely.”  But if the core logic of bias here is simply that one’s religious affiliation prevents impartiality or fairness, should all judges with religious affiliations feel obligated to recuse themselves from any case that implicates the principles or official teachings of their religion?  Are jurists incapable of separating personal belief from professional obligation?  For example, should the six Roman Catholic Supreme Court justices have recused themselves from the Hobby-Lobby case given the Catholic Church’s stance on contraception?  And why stop with religion?  If one’s ancestry and religion create an inherent conflict, then it would seem to follow that one’s gender and race bring about an inherent conflict of interest, too.

In fact, Hillary Clinton recently responded to Trump’s criticism of Judge Curiel by making this observation: “I’m waiting for him to say—because of all the bigoted things he’s said about women—that a woman judge couldn’t preside.”  Would Trump contend that the three female Supreme Court justices should recuse themselves from all cases that deal with women’s reproductive rights or women’s rights in general?  Similarly, should African-American or minority jurists recuse themselves from Affirmative-Action cases?  And the flip side of all of this is that, if one embraces the core logic of Trump’s argument, persons who do not share in the identity explicitly affected by the judicial proceedings under examination are also similarly influenced by their ancestry, religion, gender, and/or race (we might label this the flip-side of Trump’s logic).

Take, for example, the case of ancestry or national origin.  Pursuant to Trump’s logic, non-Hispanics, too, must be influenced by their ancestry, and presumably their conclusions regarding immigration policy will be affected by their heritage (if non-Hispanics are not similarly influenced by ancestry, then Trump cannot coherently claim to detect bias in the case before Judge Curiel based on evidence of ancestral pride).  Thus, my status as a proud Italian-American should influence my views on immigration policies (or any policy that relates to national origin or ancestry).  In judicial proceedings relating to questions of ancestry and national origin, then, under what circumstances is a recusal unwarranted?  In any of the examples provided above, under what circumstances is a recusal unwarranted?

At this point, it should not be hard to see the reductio ad absurdum of Trump’s argument.  If taken to its logical extremes, Trump’s identity-based theory of judicial recusal knows virtually no bounds.  In fact, there is really no justification for excluding political affiliation (by itself) or ideology from the identity markers explored above.  Given the unworkable and odious nature of a system of recusals based on ancestry/ethnicity, religion, gender, and/or race, it is unsurprising that the citing of such identities as evidence of bias has been viewed as “unreasonable” by the courts.   Simply stated, the logic undergirding Trump’s position is at odds with the current federal protocol governing recusals.

In underscoring the absurdity and unworkability of the theory on which Trump’s demands for recusal rest, I have overlooked at least one possible objection.  Perhaps I have taken liberties in assuming that Trump thinks one’s ancestry and/or religion always influence(s) his/her perception, thus rendering that person biased; maybe he thinks that only some ethnic identities—e.g. Mexican—and some religious identities—e.g. Muslim—lead to, or are evidence of, bias.  While this position may prevent the scenario of boundless recusals described above, it mires Trump in a morally objectionable problem: this view singles out persons for differential treatment under the law solely on the basis of their ancestry, religion, etc.  This is the quintessence of impermissible discrimination.  Therefore, the central contradiction in Trump’s comments regarding Judge Curiel reveals to us either that Donald Trump singles out for unequal treatment certain racial or ethnic groups or that he has a theory of judicial recusal that is unworkable and equally indefensible, one that would ultimately undermine the rule of law.  Either option is dangerous and unacceptable.  For how can judicial independence be maintained and the legal system function properly if we operate in a world where there is practically no person capable of discharging the duties of the judiciary?

James DeLise is an assistant professor of instruction in the Intellectual Heritage Program at Temple University.