Don't apologize, Noah Galvin: Let’s applaud celebrities who dare to speak their mind, not tear them down

Hollywood doesn’t need to silence Noah Galvin. What it really needs is 1,000 more celebrities exactly like him 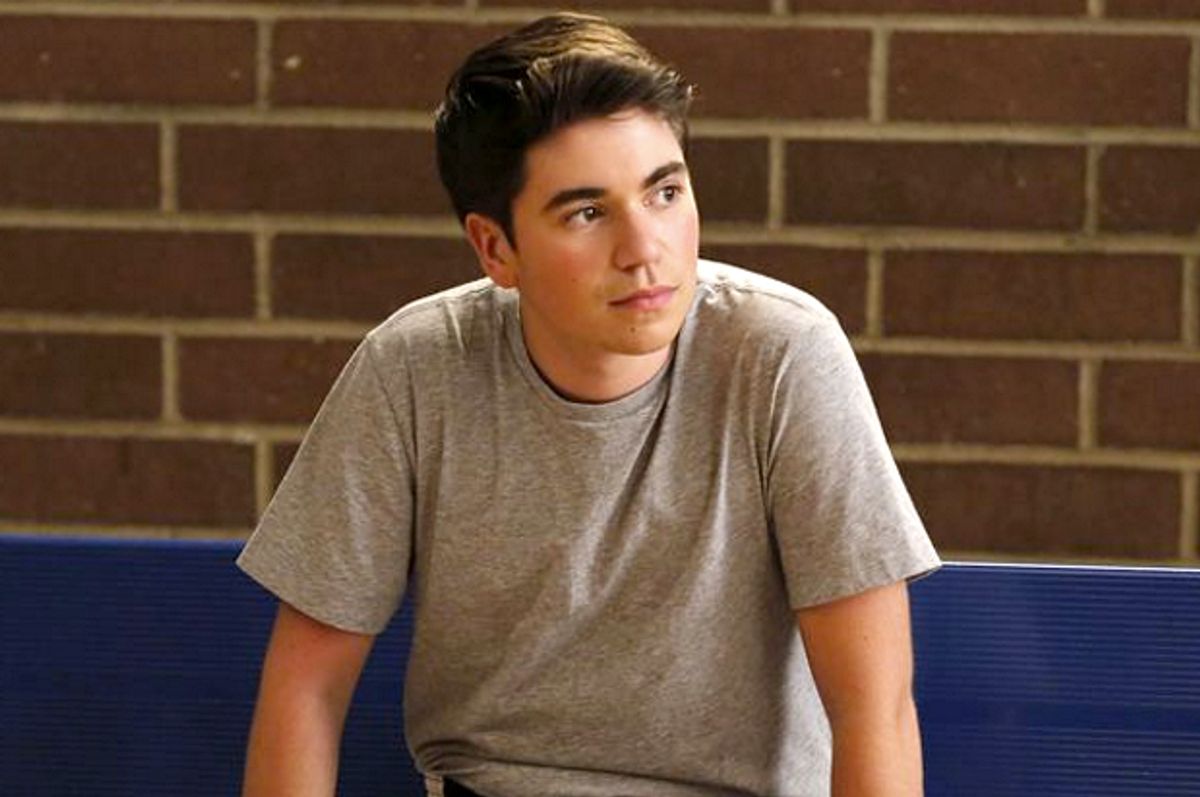 Noah Galvin is sorry. The openly gay star of ABC’s “The Real O’Neals,” in which the 22-year-old plays Kenny, a gay Catholic high school student, issued a mea culpa on Twitter just hours after an interview he gave to Vulture stirred up controversy on the Internet.

In the chat, Galvin takes no prisoners, commenting with bracing candor on Hollywood’s glass closet and what it’s like to be a gay actor in Tinseltown. As Galvin tells the entertainment website, he’s lost out on parts because of his sexuality, deemed “too gay” by producers. The young actor criticized former “Teen Wolf” actor Colton Haynes, who officially came out in a May profile published in Entertainment Weekly—but without saying the word “gay.” “That's not coming out,” Galvin said. “That's fucking pussy bullshit. That's like, enough people assume that I sleep with men, so I'm just going to slightly confirm the fact that I've sucked a dick or two.”

Additionally, Galvin stated that as a queer person, it’s important that the character he plays on television feel authentic—and not just another act of gay minstrelsy. He particularly pointed to Eric Stonestreet's portrayal of the character of Cam on “Modern Family,” who he believes is “a caricature of a caricature of a stereotype of stereotype.” “I don't want Kenny to just be the Eric Stonestreet,” he said. “I want him to be a person.”

Galvin offered a retraction on Thursday night—remarking that he is “very sorry” and “new at this”—likely after his publicists got word of the interview and quickly hit the lockdown button on their panic rooms. After all, the actor made some statements that could potentially get both him and Vulture in legal hot water: In the initial interview, Galvin commented on widely circulated rumors about director Bryan Singer (known for helming the “X-Men” franchise). The comment was quickly removed — after it was widely aggregated across the Internet on Thursday.

It makes sense that Galvin and his team would want to do damage control to minimize the potential blowback, especially considering that it could limit future job prospects for a fresh talent still making a name for himself. He doesn’t have the A-list clout yet of, say, Susan Sarandon or Sean Penn, the latter of whom can seemingly do or say anything he likes and still have his choice of roles in Hollywood. When Penn puts his foot in his mouth, he can use his two Oscars to remove it.

But it would be a shame for such a refreshingly honest, outspoken voice to learn the wrong lessons from this mini-controversy. Too many actors these days are deathly afraid of speaking their minds or saying virtually anything that hasn’t been pre-approved by a focus group. It’s turned celebrity interviews into mind-numbingly boring affairs that proceed like so: 1) a famous person is tasked with promoting a project, 2) an affable former comedian asks them a series of softball questions intended to portray the actor in a light that will be profitable for movie producers, 3) the two sing karaoke in their car, and then 4) everyone goes their separate ways. There are no stakes, no substance, and no honesty—just artifice on artifice on artifice.

Hollywood doesn’t need to silence Noah Galvin. What it really needs is 1,000 more celebrities exactly like him.

For an indication of what celebrity interviews today have become, let’s contrast Madonna’s infamous 1994 appearance on “The Late Show with David Letterman” with a more recent sit down with Jimmy Fallon. It would be difficult to call what transpired between Letterman and Madonna in the '90s an "interview," as it was artfully designed espionage. The late night host routinely poked fun at the Material Girl’s then very public sex life. After all, this was two years after she released her “Sex” coffee table book and the same year she sang “Where Life Begins,” an ode to cunnilingus that compares going down on a woman to KFC: “It’s finger lickin’ good.” Madonna hoped to humiliate Letterman by being as sexual as possible on his program.

She succeeded with flying colors. Very shortly after being introduced, Madonna asks, “Why are you so obsessed with my sex life?” She adds, “You are a sick fuck.” Letterman laughs, shocked at the dark turn this interview has already taken: “You realize this is being broadcast, don’t you?” Madonna continues to taunt him throughout the interview, giving him her underwear to sniff (he declines the offer) and discussing her love of peeing in the shower. She claims that urine is an antiseptic that “fights… athlete’s foot.” She further explains, “It's all got to do with the enzymes in your body.” He asks, “Don't you know a good pharmacist?”

The playful yet ribald banter between the two repeatedly threatens to break out into something more vehement. Madonna asks him if he’s wearing a rug on his head. In response, he takes a shot at her slicked back hair: “Is that a swimcap? What are you wearing?” Elsewhere, they debate about whether or not “untrue rumor” is an oxymoron (spoiler: it’s not). Madonna, though, is convinced it is, “Untrue rumor,” she says, “that’s like ‘funny David Letterman.’”

If the Letterman Madonna was like a jungle cat ready to pounce, she looked like she was taking a nap on “The Tonight Show” last year. Fallon isn’t a talk show host as much as a guy who gives happy endings for the celebrity ego. Remember when he told Jessica Alba, currently embroiled in a nasty class-action lawsuit over her “all-natural” line of Honest products, that she’s “killing it?” True to his brand, Fallon also peppered Madonna with compliments. “You look awesome!” he says. “You're the raddest. ... You are the coolest.” Clearly bored, she goes through the motions of pretending to be best friends by teaching him a dance, talking about her kids, and promoting her album (“Rebel Heart,” in stores everywhere!). That Madonna wasn’t wild; she was caged.

But during Letterman’s heyday in the 1980s and '90s, there’s nothing that celebrities wouldn't say—or do—on his show. Crispin Glover, the offbeat actor who has appeared in everything from “Back to the Future” to “Willard,” almost kicked Letterman in the face—that is, after challenging him to an arm-wrestling match. Andy Kaufman, who appeared wearing a neck brace, threw a glass of water on a rival comic and threatened to sue him. Shirley MacLaine, who called Letterman an “asshole” on air, offered to “save” the host by meditating with him.

This is not a comment on Letterman’s skills as an interviewer (to be honest, I’m not a huge fan of his) but an indication of how much has changed in the past three decades. The late film critic Roger Ebert noted this shift in a 2009 column where he wrote that film actors, even the most intelligent and fascinating of them, are today “kept on a short leash.” “Having succeeded in taming and orchestrating the media, studio marketing executives are understandably reluctant to take chances… with their publicity,” he wrote. “Some movie star might go on the air and say—why, anything!” Nobody wants to become the next Katherine Heigl, the outspoken celebrity whose career is derailed by their forceful opinions, let alone Tom Cruise or Mel Gibson.

Ebert points to the great interviews he conducted with celebrities like Michael Caine, Charles Bronson, and Shirley MacLaine herself (queen of giving absolutely no fucks), which would be impossible now. As he remarks, these were recorded during a time when famous people “still talked with an interviewer without a publicist hovering.” When MacLaine sat down for Ebert in a 1988 interview, she was candid about her perception as an eccentric: “Even though I write a lot about how important spirituality is, and how important it is to evolve to the point where you find inner peace, I'm also a tough dame, and I don't deny that.”

That long leash was, however, a double-edged sword. Celebrities (especially male ones) were allowed to say things that were shocking and offensive—often with very little blowback. During a 1971 interview with Playboy, John Wayne referred to Best Picture-winner “Midnight Cowboy” as a “story about two fags.” Wayne, a staple of classic Westerns, further called Native Americans “selfish” and stated his belief in the inferiority of black people: “I believe in white supremacy, until the blacks are educated to a point of responsibility.” His career was unharmed.

That would never, ever happen today—and it’s not just because any decent publicist would be out of a job if their client discussed “the bell curve” with a popular men’s pornography magazine. The age of Twitter is an era of self-censorship, where people are forced to be more careful and calculated about what they say, whether that’s closely held political beliefs or remarks that we perceive to be “fun and off-color!” that could go viral for all the wrong reasons (remember Justine Sacco?). Can you imagine someone like Jane Fonda sitting on an anti-aircraft gun and criticizing the war effort in Vietnam in the age of social media? If she was controversial then, she would be destroyed now.

At its worst, the social media era breeds a kind of fearful passivity—where we’re so worried about causing conflict with those around us that we might keep opinions we perceive as unpopular to ourselves. If a Gallup survey from 2012 showed that we like celebrities less if we perceive them to be outspoken, it’s perhaps because a separate Rutgers study showed that we’re distrustful of anyone who is outspoken.

It’s a very difficult thing to encourage honest and open dialogue without opening the floodgates of carelessness, ignorance and stupidity, but despite these findings, there’s evidence that we are hungry for people who say what others won’t. When Jennifer Lawrence rose to prominence after being cast in “The Hunger Games,” what felt unique about her is how unpolished her persona seemed, as if well-meaning PR people must be cringing at her back. Lawrence famously called acting “stupid” and criticized Hollywood’s thin-centric beauty culture. “'What are you going to do?” she once remarked. “Be hungry every single day to make other people happy? That's just dumb.”

There’s been an unfortunate public backlash against Lawrence in recent years—with detractors arguing that she’s 1) too honest, 2) actually very ungrateful and rude, or 3) it’s all just an act. The momentum, though, is on J-Law’s side. In recent years, the #AskHerMore campaign has pointed out the sexist questions that women are asked on the red carpet (“who are you wearing?”), but also the banality of celebrity interviews in general. Remember when Mila Kunis begged an awkward British reporter to ask her about literally anything other than the five questions she’s always asked—so the two talked about pubs and soccer? What she was really asking, though, was to be treated like something other than a walking press release.

To read Noah Galvin’s Vulture interview is to be reminded how lively and thorny celebrity interviews can be when the people behind them are treated like people with interesting thoughts and perspectives on the world, even if we don’t agree with them. Although Galvin called his remarks “brazen” and “hurtful,” the star instead comes off as the rarest of things in a celebrity Q&A—an actual human being. He’s perceptive, sharp and surprisingly grounded. When asked about being a role model to young fans, he said: “I'm still figuring out my own bullshit. I've got struggles of my own.”

If Galvin was forced to apologize for what he had to say in an era when actors don’t say anything, he should take that as a compliment. He’s doing something right.