Orlando mass shooting: Bigotry is bigotry, no matter what religion you use to justify it 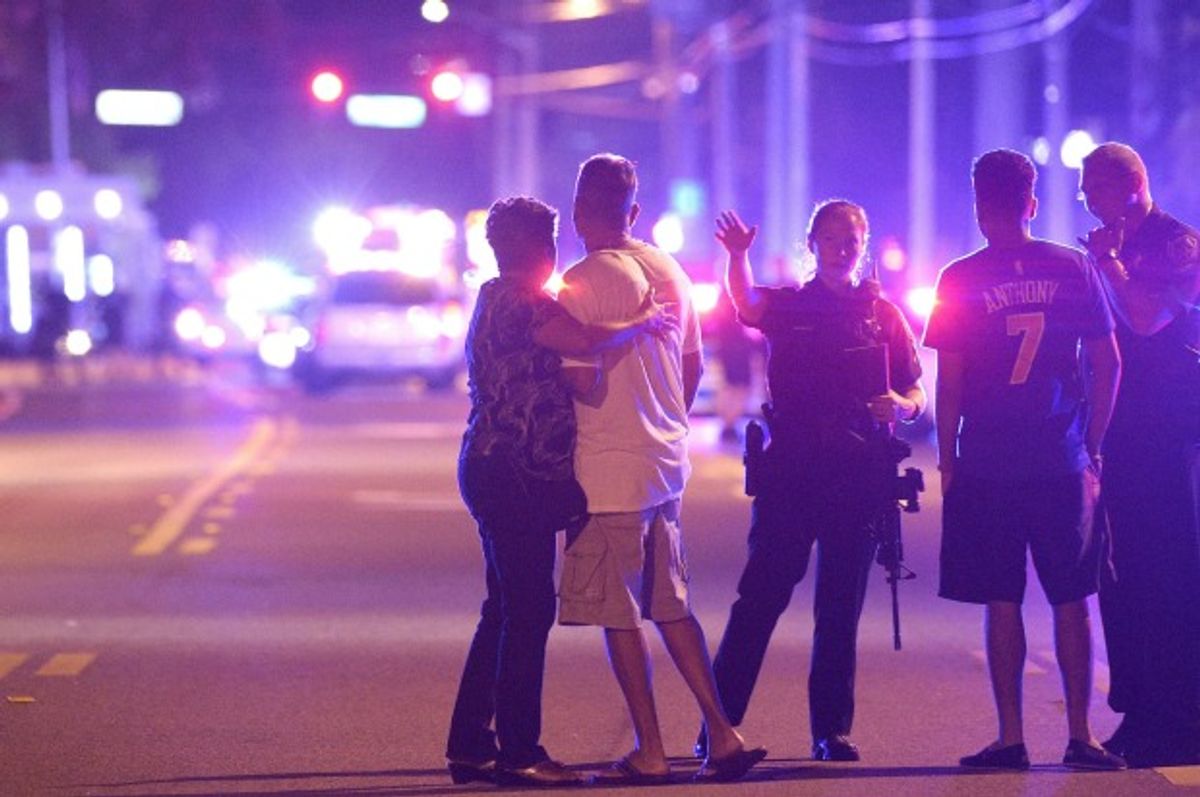 Waking this morning to the news that there had been a mass shooting at an Orlando gay nightclub called Pulse — an attack that killed 50 people and left another 53 wounded, some critically — you can sense conservative pundits getting ready to pounce. Once the name of the shooter, Omar Mateen, was released, their mouths were watering. Once it was revealed that Mateen called 911 and pledged his loyalty to ISIS, they were ready to shill their narrative.

After all, even though President Obama and Hillary Clinton have had far more success fighting Islamic terrorism than George W. Bush — the former two presided over the assassination of Osama Bin Laden, the latter started the adventure war in Iraq that led to the formation of ISIS in the first place — right-wing propaganda efforts have been disturbingly effective at blaming liberals and Democrats for being "soft" on Islamic terrorism and hinting that there's some kind of affection for groups like ISIS and Al Qaeda. This, even though it should be blatantly obvious that liberalism, with its insistence on equal rights for women and sexual freedom, is the antithesis of the right wing ideology that motivates Islamic terrorists.

Already, the propaganda machine is firing up again.

"It's not a hate crime," Sebastian Gorka of Fox News said. "It is part of an ideological military assault on the United States of America."

Bullshit. Terrorism of this nature and hate crimes are exactly the same thing: Acts of violence performed to send a political message in support of bigotry and in opposition towards the liberal goal of an accepting, open society.

"This attack in part was facilitated by the policies of this administration," Gorka continued, spinning further and further away from reality, "President Obama and Secretary Clinton, that have allowed political correctness into the threat assessment."

What does this line of attack even mean? After all, whenever Democrats do things like stand up for the rights of LGBT people to get married, live free of discrimination, or even use the bathroom in peace, they get lambasted by right wingers for this supposed "political correctness". Are we meant to believe that Mateen shot up a gay bar as a show of politically correct solidarity with the rights of LGBT Americans? Can these right wing bloviaters even hear themselves anymore?

Liberals do not deny that the Islamic fundamentalism preached by groups like ISIS and Al Qaeda regards homosexuality as an abomination and opposes the rights of gay people to live freely and to marry. But guess what! So do the Christian fundamentalists in our own country, the very same ones who are always telling us how oppressed they are by "political correctness" and how they are being denied their "religious freedom" when they are expected to treat LGBT Americans equally.

The common thread here, again and again, is religious fundamentalism, whether your call it "Christian" or "Muslim." LGBT people have been the favorite punching bag of the Christian right in this country for years. Whenever the Christian right needs to rally the troops, they start running around, hair on fire, screaming about how the queers are out to get your children.

For a decade, it was hollering about how legalizing same-sex marriage portended the death of our civilization. When they realized that dog wasn't going to hunt any longer, because the Supreme Court legalized it and society didn't collapse, they shifted gears, claiming Christians are losing their "religious freedom" because they have to follow anti-discrimination laws just like everyone else. Now they're screaming about how letting trans people use the bathroom in peace is somehow turning bathrooms into dangerous places for women and girls.

But while there is absolutely zero evidence that allowing LGBT people their basic rights has done any damage whatsoever to straight people, there is a substantial amount of reason to believe that this constant drumbeat of bigoted rhetoric coming from the religious right makes the world less safe for LGBT folks.

According to the FBI's latest hate crime statistics, over 20% of the 5,479 hate crime incidents in 2015 were anti-LGBT. Violence against trans people, in particular, is on the rise, in no small part because of the increasing drumbeat of anti-trans rhetoric coming from the Christian right. You keep screaming about how trans people are supposedly going to rape you in the bathroom, you can't be surprised if someone decides it's okay to beat or even murder a trans person.

This is important, because the cover story the right will surely hide behind when arguing that their homophobia is okay while Muslim homophobia is evil is that "Christians" don't act out violently on their beliefs. (I've already had to block people on Twitter for  pulling this card, and it's just a matter of time before someone tries to split that hair on Fox News.) This is, as those FBI crime statistics show, utter bullshit. Those crimes happened in a country where most of the homophobia is justified by citing Christianity, not Islam. But wave the Bible or wave the Koran, but the common theme here is using religion as cover for vile bigotry.

Omar Mateen's ex-wife has also come forward to say that he beat her during their extremely brief marriage. This is no surprise. Homophobia, misogyny, toxic masculinity, and religious fundamentalism are all tied together in a noxious knot that feminists call "patriarchy", and it's a cancer that crosses cultural and national and even religious lines.

It's the root cause of those anti-gay hate crimes, of that disgusting Stanford rapist's entitlement (and of rape generally), of the thousands of women who lose their lives to domestic violence, of all manner of oppression, from child marriage to abortion bans to anti-sodomy laws.

We do not fight this evil by blaming liberalism. We fight it by embracing liberalism, and the values of equality, religious liberty, acceptance, and sexual freedom. We strive for an end of all religions teaching that homosexuality is a sin or that women are inferior to men. We demand an end to all hate, whether it goes under the name of "Christianity" or "Islam" or whatever other word you want to give it. Only then will people be free to live their lives without fear of bigotry-based violence.