Understanding one of the most critical Supreme Court cases of the year: HB2 and the fate of abortion access in Texas

Whole Woman’s Health v. Hellerstedt is the most important abortion case in decades 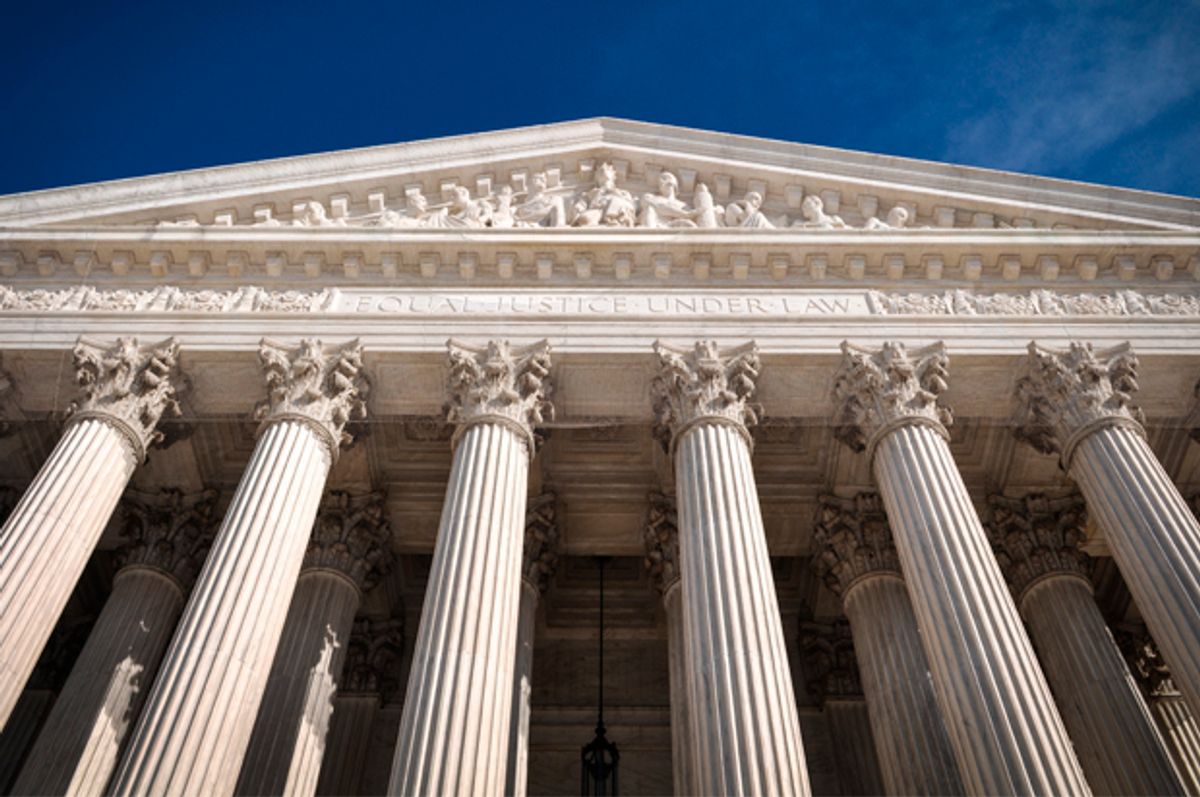 Many in Texas are playing a familiar and fraught waiting game. June is the month of Supreme Court decisions and this year the Court is considering the most important abortion case in decades, Whole Woman’s Health v. Hellerstedt.

The case is about a Texas law, called HB2, which is a sweeping law that imposes restrictions on access to abortion. Two provisions of the law are before the court, one requires that doctors who provide abortion services must obtain admitting privileges at local hospitals no farther than 30 miles away from the clinic; and the other mandates that every health care facility offering abortion care must meet building specifications to essentially become mini-hospitals (also known as ambulatory surgical centers, or ASCs).

If the law is upheld, these restrictions would mean that there would be 10 clinics left in Texas, a state of 27 million people, and leave more than 500 miles between San Antonio and the New Mexico border without a single clinic.

There are many nuances and complexities regarding the impacts of the law currently before the eight-member Supreme Court, but it all comes down to one crucial question: Do these regulations place an “undue burden” on people seeking an abortion?

This concept of “undue burden” is the current legal standard to assess whether abortion laws violate Roe v. Wade. In 1992, the Court heard Planned Parenthood v. Casey and upheld the basic right to abortion. Justice Sandra Day O’Connor wrote the decision in Casey, which said that, while states did have the right to regulate some aspects of abortion, their power to put restrictions on abortion had limits. O’Connor wrote, “Only where state regulation imposes an undue burden on a woman’s ability to make this decision does the power of the State reach into the heart of the liberty protected by the Due Process Clause.”

In the past 15 years, 471 restrictions on abortion access were enacted. These restrictions include refusal to cover abortion care with federal funding, limits on private funding for the procedure, parental notification or consent requirements for minors, and a wide range of regulations on abortion facilities themselves. If the Supreme Court finds no evidence that HB2 creates an undue burden on people seeking abortion, they could open up the door for more states to pass copycat laws. Now, Whole Woman’s Health v. Hellerstedt serves as a kind of a test of the “undue burden” standard applied by Casey in 1992.

Liza Fuentes is senior project manager at Ibis Reproductive Health and co-investigator at the Texas Policy Evaluation Project (TxPEP). TxPEP is a five-year comprehensive effort to document and analyze the impact of the measures affecting reproductive health passed by the 82nd and 83rd Texas Legislatures, including the impact of HB2.

Fuentes told Salon that their research shows that the impact in Texas will be significant. “Our research has shown that clinic closures after HB2 resulted longer wait times for an appointment, and women having to travel significantly farther spend more in out-of-pocket costs to obtain an abortion. For example, the average distance that women in our study traveled to a clinic if their nearest clinic had closed was 85 miles each way — nearly four times as far than the 22 miles that Texas women traveled when their nearest clinic remained open,” she said. In their research, TxPEP also interviewed women seeking abortions after all but one-third of the clinics in Texas closed practically overnight, after HB2 went into effect. One of those women, a 23-year-old married mother of two from Waco, shared her experience:

“I called Dallas, I called San Antonio. I think in Austin and here in Waco they weren't doing nothing, and they said they didn't have a surgeon or a doctor for that here. They used to have one. I don't know  what happened but they didn't have one at the time. I also did look at ways that I could do it myself at home but it was like either you do it, you might hurt yourself or you might, you know, hurt the baby. I called back, and I think they told me that they weren't doing [medical or surgical procedures], that the government had put a stop or something…I was pretty upset, but I just decided that I guess I′ll have to just ride it out. I didn't know what else to do, who else to call.”

Texas Gov. Rick Perry made the GOP’s mission plain when he spoke at the Texas Capitol on the 40th anniversary of the Court’s decision in Roe v. Wade this past January, “The ideal world is one without abortion. Until then, we will continue to pass laws to ensure abortions are as rare as possible.”

So, as Republican lawmakers posit that laws like HB2 are about protecting women’s health, they’ve already shown us their hand. Nancy Northup, President of the Center For Reproductive Rights, the organization that argued the case before the Supreme Court in March, said, “veiled in misleading claims of protections for health and safety, the politicians behind the law set out to deny women their Constitutional right and access to safe and legal abortion care.” Amy Hagstrom Miller, CEO of Whole Woman’s Health and lead plaintiff in the case, said that we do, in fact, know the impact the law will have.  Miller pointed to the Fall of 2013, when HB2 went into full effect. The result, she says, was devastating for abortion access, “75 percent of the clinics in the state were immediately shut down and there was over a 3 to 4 week wait to get an appointment, even in places like Houston, Austin San Antonio and Dallas/Fort Worth.”

Stephanie Toti, the lawyer who argued the case before the Supreme Court said, that she made the case before the eight justices that “the undue burden standard requires meaningful scrutiny of laws that restrict access to abortion care… [and that] uncritical deference to legislative determinations is inconsistent with supreme court precedent.” She called for the Court to consider the impact on the millions of Texans, and possible many others around the country if this law is upheld, saying the provisions in the law “are not medically justified … these restrictions impose heavy burdens on abortion access… if they are allowed to fully implemented they will delay thousands of women access to abortion and prevent other women from accessing safe and legal abortion care at all.”

Now, a few things could happen. The Justices could vote to overturn the law, return a tie, or vote to uphold the law. If they allow the law to stand,

The stakes are high. All eyes are on the Supreme Court which is working without a full bench, due to the death of Justice Antonin Scalia and the refusal of Senate Republicans to consider the nomination of Merrick Garland, President Barack Obama’s choice to replace Justice Scalia. There are few possible scenarios. They can uphold the law. They can deadlock in a 4-4 tie. They can rule against Texas’ law. They can ask for more information from the parties and delay ruling altogether.  Or they can split, and uphold one of the provisions of HB2 and reject the other.

If the law is upheld by the Supreme Court, all but nine of Texas’ abortion clinics will be forced to close. Some women  will have to drive hundreds of miles to reach a clinic. Wait times at those remaining clinics will lengthen, possibly stretching several weeks. Some people will be too discouraged by these hurdles to continue their search for a safe place to get an abortion. Undocumented women in Texas’ Rio Grande Valley will be hundreds of miles from a clinic and not able to drive to one without passing checkpoints, which dot the Texas highways.

If there’s a 4-4 tie, Texas would revert to the ruling of the 5th Circuit Court of Appeals, which decided to uphold the law and all the same impacts, just described, would apply. Notably, the case could potentially come up to the Supreme Court again, when there’s a full 9-person bench.

If there’s a split with the provisions - though Ms. Toti and Ms. Northup have said they’re optimistic that the Court will strike them both down - the admitting privileges part of the law, which is partially enforced already, has already resulted in the closing of more than half of the 41 clinics in Texas. It could bring down the number of open clinics to about 16 or 17 (currently there are 19 clinics open, and the situation is dire). If the provision of the law requiring clinics to operate an ambulatory surgical center is upheld, all but nine clinics in the sate would close.

If the law is struck down, Amy Hagstrom Miller describes the potential impact on abortion providers and clinics, saying, “not only will we get relief from these onerous restrictions, but we would have the opportunity to reopen facilities that have had to close, we will have the opportunity to take a stand for clinics all across the country and for the women and families that they serve to say that we can put a stop to these bully politicians.” She notes that they can’t reopen clinics overnight, it will take time to rebuild the infrastructure that once existed. Leases have expired, buildings were sold, equipment was sold and providers and staff have had to find new jobs in the several years since HB2 passed.

As we are embroiled in the politicking of a presidential election year, it’s important to note that the court’s decision will surely bring the question of abortion rights onto the campaign trail. Hillary Clinton has a murky record on restrictions to abortion access, having at times supported them strongly and more recently spoken out against them, particularly those that would limit federal funding to cover abortion care. Bernie Sanders’ long career has been relatively straightforward — he’s opposed every restriction to abortion access, and has said as much when asked. For his part, Donald Trump has swung the farthest — at one time being expressly pro-choice and during his campaign for the Presidency going so far as to say that women who have abortions should be punished. The Supreme Court’s ruling on HB2 will certainly result in a fresh round of discussion on the subject, and each candidate’s trajectory on the issue. All while the fate of Texas hangs in the balance.