What's the deal with Daenerys? "Game of Thrones" needs to break its badass queen out of her rut 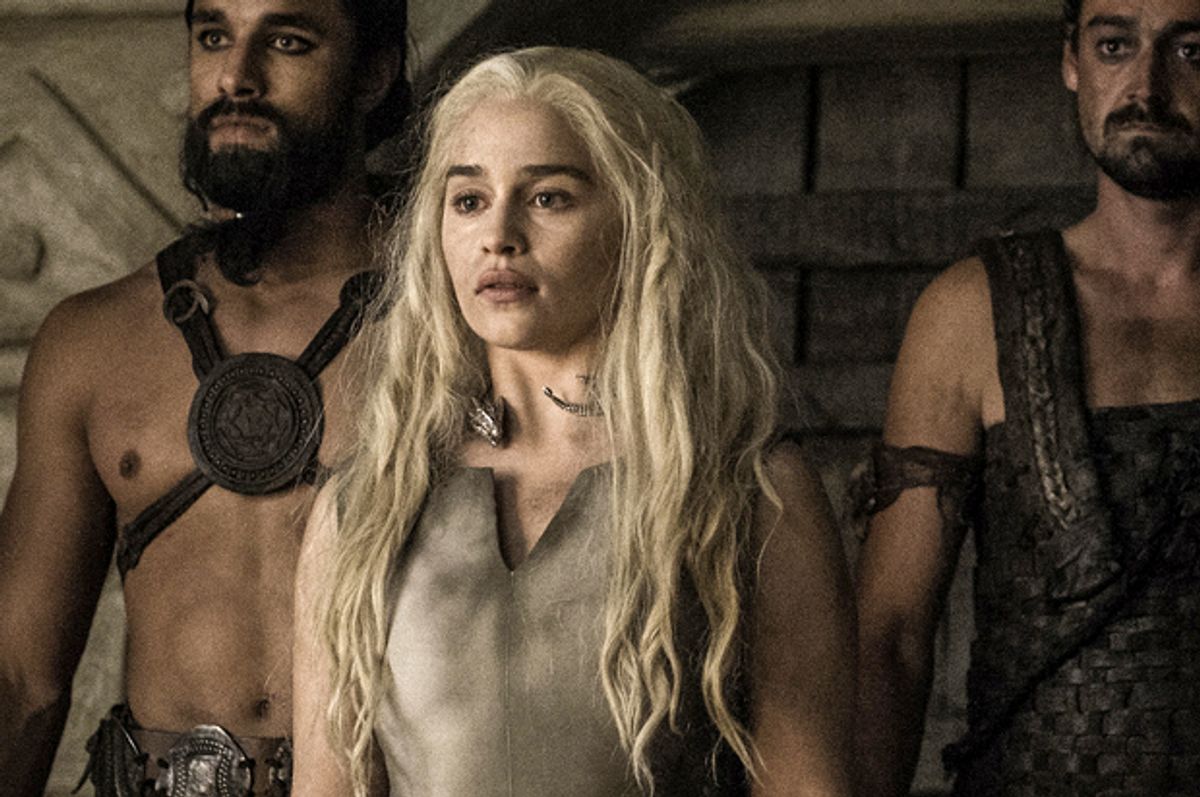 In almost any other season of "Game of Thrones," watching Daenerys Stormborn of House Targaryen, the mother of dragons, the Unburnt, queen of the Seven Kingdoms of Westeros, mount her beloved Drogon to rally her Dothraki horde so that she can claim what is hers with fire and blood, sword and claw, would inspire awe—or at least a fist-pump and a “yes, Queen!” And yet, this moment, the final scene in the episode “Blood of My Blood” feels surprisingly tepid. How could it be that the dragon queen at her zenith—incinerating (quite literally) her boorish Dothraki captors; standing naked, unscathed, in the blaze as her new subjects bow at her feet; and establishing a telepathic bond with her nuclear warhead of a pet—is so, well, boring?

Perhaps this because, as Vox TV critic Todd VanDerWerff puts it: “Every Daenerys Targaryen story on Game of Thrones is the same story.” Ever since she emerged from Khal Drogo’s funeral pyre with her freshly-hatched little dragons perched atop her shoulders, Daenerys’ story has, in some ways, followed the same circular template: She is grossly underestimated by a group of powerful and Neanderthal-ish men, but manages to use their contempt for her to her advantage—which inevitably leads to a profoundly GIF-able moment of feminist triumph. These triumphs have been the balm for many fans who’ve been burned by the ways that the show has treated its women characters: We need her delightfully cocky, “All men must die, but we are not men,” and her artful besting of the wise masters (I can’t be the only one who searched “Dracarys!” on YouTube at least once a day for months afterward) to balance out (as much as it can) watching Sansa Stark brutalized on her marriage bed or Cersei Lannister paraded naked and bleeding through the streets.

Daenerys’ early story arcs also had a revisionary function, taking a red pen to some of the most problematic (and sadly all-too-common) issues for the women of Westeros: She survives her own brutal wedding night, and manages to—through coaching, cunning, and strength of will (not to mention more than a little luck)—attain real influence over her husband, pushing him to ban slavery and rape among his khalasar; roasts the religious leaders and old boys’ networks of Qarth and Meereen who attempt to shame and displace her (while the FrankenMountain is no doubt formidable, I’d still bet that Cersei Lannister wishes she could get her hands on that dragon fire); and wields an incredibly blunt form of power (different from, but not entirely unlike, Brienne of Tarth’s prowess as a swordswoman and a brawler), while still enjoying the genuine admiration and respect of trusted men. Dany is also arguably the only woman on "Game of Thrones" to have an uncomplicatedly enjoyable sex life.

Objectively, VanDerWerff is not at all wrong when he writes that, “[Daenerys] tends to function as a character who's perpetually about to do something — namely, invade Westeros — rather than a character who's actually accomplishing much.” But Dany’s position as one of the few female leads who seemed poised to achieve something, anything, of her ambitions made all that wheel-spinning seem as shiny and colorful as a pinwheel—it’s only now, in season six, as the show course corrects its approach to writing women, particularly women in power, that this wheel has become more like a flat circle. While Dany has been sidelined in the temple of the Dosh Khaleen, reciting her titles and burning down the house (yet again), Sansa Stark has become quite the hard-ass, building coalitions and staring down Northern Lords; Margaery Tyrell is mastering the art of the long game against the High Sparrow; Arya Stark rebels against the casual ethics of her mentors in the House of Black and White; Brienne of Tarth seems poised to enter into a rather complex parlay with her old friend Jaime Lannister (whose house is in a blood feud against her mistress’s); and even Lyanna Mormont, the pre-teen chieftain, shows a cool command of Bear Island.

In seasons past, many of these women’s plotlines focused on the everyday ache of survival, pushing Daenerys’ quest for power into a deeper, more powerful contrast. However, as these women have broadened their focus beyond the day-to-day, into defending their causes and reclaiming their homelands; avenging their indignities at the hands of the Boltons or the Faith Militant; and determining whether they’ll use their new-found lethality to serve dispassionate masters or within their personal ethics, Daenerys’ fire-and-blood struggle doesn’t seem so novel. Dany’s lover Daario tells her (jokingly, yet truthfully) that she is “not meant to sit in a chair,” because she is, by birthright, a conqueror. He says this as if conquering would honestly be a challenge for her—and the problem is, frankly, that it isn’t: not with a trio of fire-breathers, an army of Unsullied, and a dedicated Dothraki horde. The real challenge, the true test of bravery, is to stand, unflinching, as a survivor of rape, while a large man yells into your face; or to endure the mockery of your own kinsmen in your campaign for the Salt Throne.

Yara Greyjoy’s failure in the kingsmoot spotlights the frivolity in conquering alone—she is, as her brother Theon says, the most qualified to rule; the daughter of the king, but also a fierce warrior and strategist who has lead successful sackings and pillaging. Yet she loses to her uncle, Euron, a man whose only plan, ironically, is to marry Daenerys to make use of her dragons—for what, exactly, he’s not quite sure. And neither is Daenerys. She has broken chains and reigned down flames, but she hasn’t actually ruled Meereen. The city has descended from disarray into chaos, and the only fragile, tentative peace has been brokered by Tyrion Lannister’s heartbreaking bargain with the slavers: seven more years of the collar and the whip to keep the gutters clean of blood. This makes Dany look like a paint-by-numbers bad-ass, able to create those Tumblr-worthy moments but no real, lasting change. One simply can’t make the case for her that Theon can make for Yara; if anything, Daenerys’ methods of might making right eerily align her with Uncle Euron, or the Dothraki she turned into crispy khals.

Of course, there’s nothing wrong with making Daenerys falter from her ideals and violate her own hype—this would, frankly, make her a richer, more complex figure, akin to Cersei Lannister, the last truly interesting antagonist the show has to offer (I hope that the forthcoming “Battle of the Bastards” solves the show’s Ramsay problem with his head on a spike). But we see Cersei reckon with the consequences of her villainy in ways that add pathos to her character while also illuminating some unsettling truths about the corrupting influences of privilege and misogyny. Daenerys has been given no room for reflection, and no obstacles she can’t burn her way out of. Her story may have been a necessary palliative before—now, it seems like a superficial set of stage directions for a “strong female protagonist.”

Girls may soon run the world—the world of Westeros, and in the real world, the free world itself—which makes the show’s failure to advance its khaleesi’s story into a more nuanced examination of how a woman might effectively wield that kind of ultimate power, and what the personal consequences of wielding that power might be, particularly disappointing. Daenerys is the daughter of a tyrant who must battle against her inherited legacy of horror and violence while trying to make the case that she deserves to rule. Her story should be inherently interesting. Now that "Game of Thrones" is redefining what it means to be a heroine, a woman of valor and complexity, Daenerys has become like her titles: a whole lot of pomp and circumstance signifying nothing.