Arya's fate is decided, Brienne gives it her all, Cersei's power withers and Tyrion's wisdom comes up short 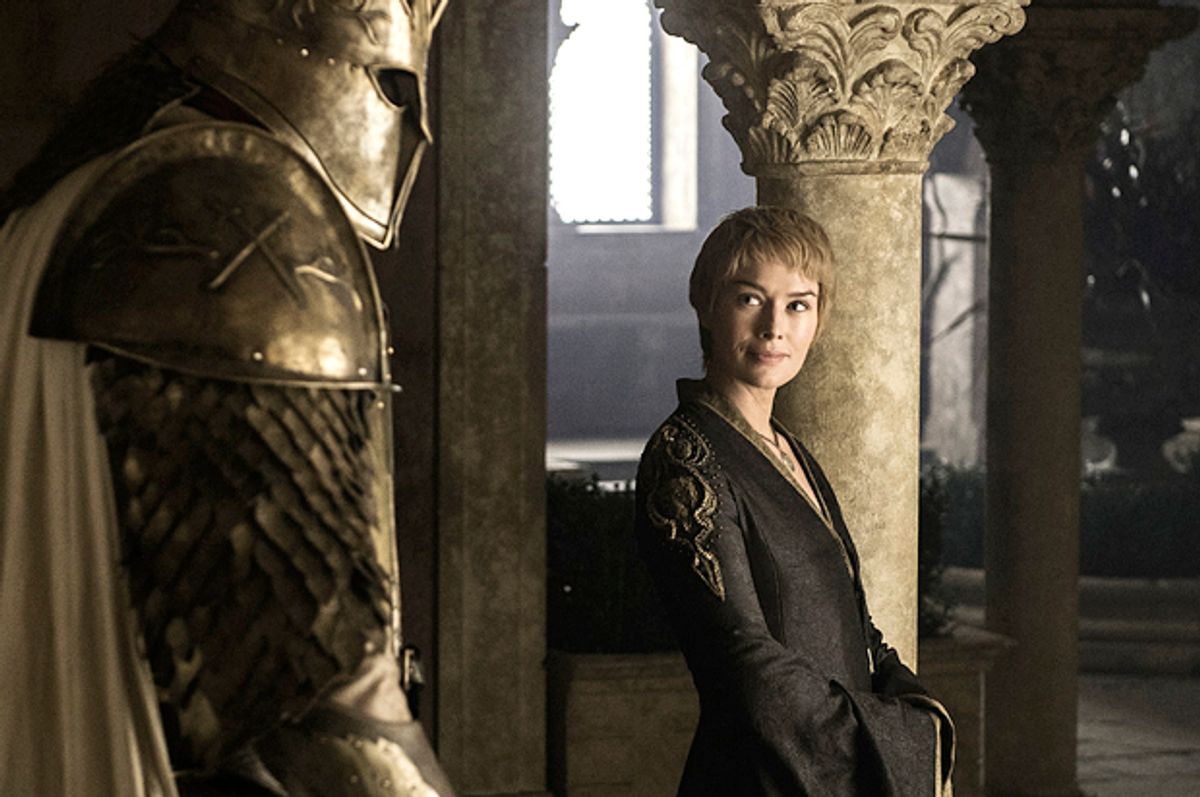 Whether you’re a dragon-riding khaleesi or a deposed queen regent, the witty scion of a wealthy family or a legendary rogue, your identity means everything across the seven kingdoms. Sure, fans can joke about the poor Starbucks barista who has to squeeze Dany’s full name on a cup (I’d imagine that “Stormborn of House Targaryen, the Unburnt, Mother of Dragons …” might barely fit on a Venti) or debate if Jaime Lannister deserves such scorn as “the Kingslayer” (who, in driving his sword through the Mad King’s back, saved thousands of innocents from being roasted alive), but the ancestral titles and the whispered smears, the ballyhoo and the reputations as strategists or warriors or immaculate bedfellows do more than precede our characters in their travels around the realm—they inform everything our characters believe about themselves (and others) and everything they’d like to be. Though this episode’s title is “No One,” it is very much about what it means to be a very specific someone.

How fitting, then, that we open on Lady Crane playing the part of Cersei Lannister, weeping and railing over the son who was, throughout his short, brutish life, a testament to her greatest failure at her greatest calling: Motherhood. It’s clear that Lady Crane has moved beyond her initially broader, more caricatured portrayal of Cersei, taking into account Arya’s insights into the real queen regent’s character as a woman who lashed out in loss. This description certainly aligns with Arya herself, the tomboy turned hard-ass, who leaves Sandor Clegane battered the bottom of a Cliffside and who wants, more than anything, to learn to kill her enemies.

And, apparently, it also aligns with Lady Crane; she ministers to Arya’s gut-wound (seriously, what is it with Starks and being stabbed in the stomach?) so ably because she has “put a hole” in so many of the bad men who loved her back. Essie Davis has brought a careworn, sensual toughness into her portrayal of Lady Crane; she seems fully capable of turning the face of that murderous rival into mincemeat and of gently ushering Arya to sleep. The only women Arya has known are either courtly ladies like her mother and sister, strapping warriors like Brienne (for a moment, anyway), or passionless killers like The Waif—Lady Crane, however brief her presence was, has opened up the possibility of an identity that combines all of these essences. The close-up of her hand on Arya’s feels almost like a transfer of power, or at least of understanding—and, interestingly enough, it’s the first of several key close-ups of hands.

The second close-up belongs to the hand of an ornery Sparrow who makes the mistake of cleaving his ax into The Mountain’s chest; ripped clean of its owner, it sits, finger still twitching, in an ooze of blood. Because Cersei, asserting that last bit of authority she has so desperately clung to, chooses violence (and I’m not going to lie, gruesome as it was, it was oh-so-satisfying to see her do it). Yet momentarily reliving her queenly glory costs her, dearly—her final child (the one that prophecy—and "Game of Thrones" Reddit—predicts will soon be in a golden shroud), King Tommen, bans the practice of trial by combat that she’d hope would give her vengeance and salvation. Cersei’s tragedy (or, arguably, her comeuppance) is that she has gone from being a very big someone to a real no one; in losing the title and prestige of queendom, she has become thoroughly superfluous—even to the boy-king who won’t let her stand at his side (admittedly, I’ve been lukewarm on Dean-Charles Chapman, but he does excellent work in letting the saddest expression flicker across his face while he passes Cersei in the galley).

Though she blames her brother Tyrion for Joffrey’s murder, these siblings might be able to set aside their blood-feud over a bottle of red from the Imp’s Delight vineyard—for Tyrion, who has been celebrated as one of the wisest men in Westeros, has let his reputation muddle his judgment; of course, he would know how best to handle the Wise Masters—far better than Grey Worm and Missandei (who only, you know, lived under these slavers for years). His attempts to get the two to join him in a drink and a few bad jokes go beyond trying to make nice with the new co-workers; they speak to how homesick he is. He certainly may not miss the family he has left (excluding Jaime), but he clearly misses having that intricate understanding of the political machinery in King’s Landing. So he tries to fit the round cog around the square-shaped gear and (were it not for the Dany-ex-machina) would have left the console smoking and ruined. The Wise Master’s attack by sea, filmed by director Mark Mylod in a charcoal-tinted silhouette, even recalls Tyrion’s triumph at The Blackwater. Now, the (ex) master tactician will face the judgment of the dragon queen who only knows how to bluntly conquer.

If Tyrion and Cersei are mourning identities as rulers and great minds, then the third Lannister, Jaime, is trying to shuck off the gold-armor straightjacket of his legacy as “The Kingslayer.” He remembers his tenure as Catelyn Stark’s prisoner, and his own vicarious empathy for how her maternal ferocity echoes Cersei’s, when he vows to get Lord Edmure Tully a hot meal and a bath. “Do you imagine yourself a good man?” Edmure asks, taunting Jaime with his personal, and family, histories of viciousness and treachery: “All of us have to believe that we’re decent to sleep at night. How do you tell yourself you’re decent after everything you’ve done?” It’s an effective bit of dialogue, though a bit on-the-nose (and I highly doubt that Ramsay Bolton worries an iota about his personal decency when he counts flayed sheep at night). Jaime’s scenes with Brienne—the walking embodiment of chivalry and valor who believes that, at his core, he holds the same values—are more poignant, and reveal more about how he has evolved.

He agrees to let her into the castle to try and persuade the Blackfish to abandon his cause and pick up Sansa’s banner after she appeals to the part of him that gave her Oathkeeper so that she could protect Ned Stark’s daughter (even if he wasn’t exactly putting odds on Sansa’s survival): “You’re a knight, Ser Jaime.” Yes, he is—and he is also a man hopelessly, violently in love with his own sister. His plan to reclaim Riverrun for the Freys, an ignoble house if ever there was one, may seem admirably bloodless at first—however, in sending Edmure as a Trojan Lord, he thumbs his nose at the conventions of honor and loyalty that command soldiers to, against their better judgments (and even their own survival instincts), lower the drawbridge. And yet, as he watches Brienne sail away—her hand raised in a sorrowfully tentative farewell—he sees a glimpse of another, simpler, but no less passionate life; I’m not talking about love per se (although Bronn’s ribald banter alludes to a higher feeling), rather, the promise of honor.

Sandor Clegane has no such qualms about embracing his rep as a killer; though his murdered mentor claimed that violence is a disease, he makes a fillet of the bandits’ more sensitive body parts with panache (“You’re shit at dying, you know that” is pure guttural poetry). However, he ends the episode wondering whether to embrace his status as below-the-radar and beholden to no one, or to join in the Brotherhood Without Banners as they prepare to face the threat beyond the Wall. Berric Dondarrian assures him that he has a purpose, and that this purpose is to offer enough help to balance out all the bone-breaking, blood-gushing hurt he’s doled out.

It is ironic, then, that the only character who definitively establishes her identity is Arya Stark, the girl whose training depended on a systematic dismantling of the self, becoming a “no one” ever-ready and able to kill based on the arbitrary whim of some odd god, or a hack actress with a purse full of coins. Arya finally vanquishes The Waif, the perfect manifestation of that Terminator mentality, by picking up Needle, the sword given to her by her beloved older brother back when she was that puckish tomboy, and relying on the muscle memory she adapted while blind (her punishment for crossing one of the names off of her hit list). When Jaquen tells her that she has now truly become “no one,” he is perhaps suggesting that she has found a way to push through all the fears she’s accumulated, like so much scar tissue, from her old life. Still, she puts that face without a name (and even Jaquen H’gar has a name) on the wall of other anonymous kills because she embraces being Arya Stark of Winterfell, for all of the sad, savage memories and losses it entails.