Mitch McConnell is mixed up: He admits Donald Trump "doesn't know a lot about the issues," but says he should be president 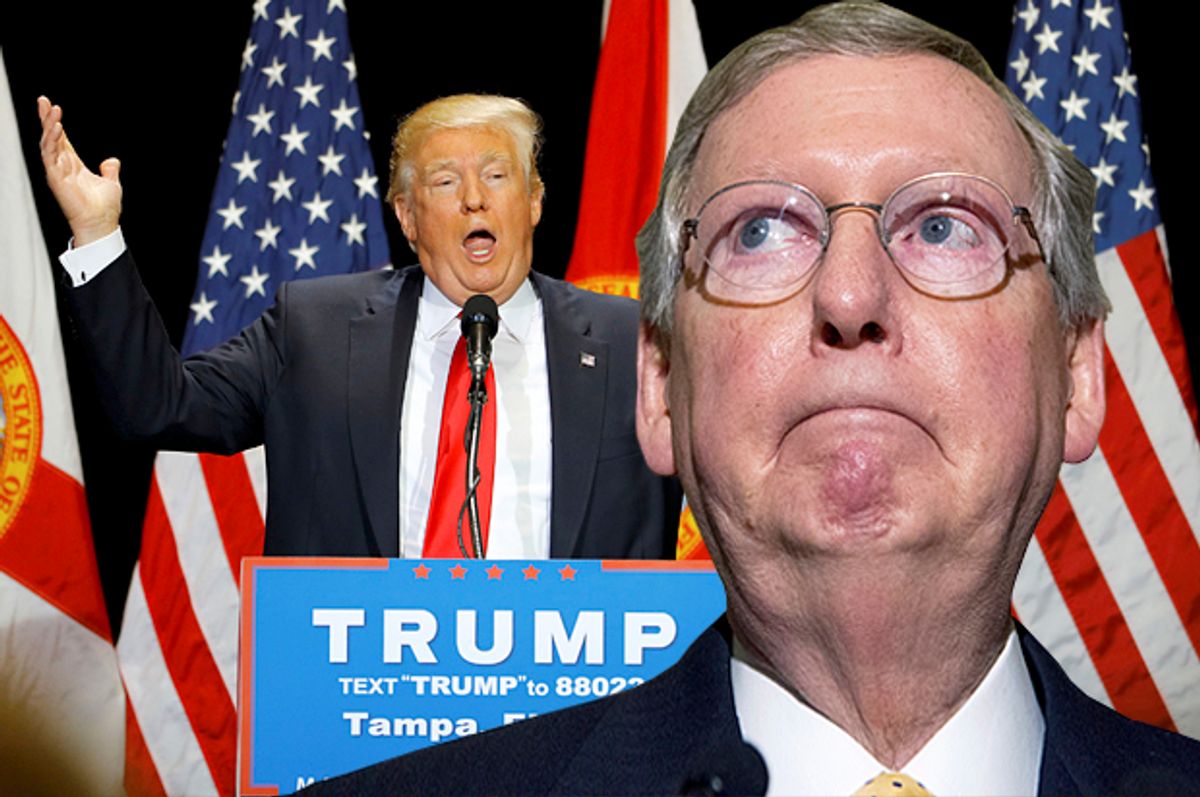 Republican leaders have staked out a curious position on Donald Trump. Bloomberg's Margaret Carlson perhaps put it best: “Donald Trump is a deplorable racist. I'm supporting him.” Stated differently, Trump is a flexible racist they can work with.

Last week, House Speaker Paul Ryan called Trump's recent criticism of Mexican-American judge Gonzalo Curiel “the textbook definition of a racist comment.” Yet immediately after that he said that Hillary Clinton wasn't the answer and that we're better off with an amenable racist in the White House than with an experienced U.S. Senator and former secretary of state. Several other prominent Republicans followed Ryan's lead and assumed a similar stance.

The logic here is difficult to accept.

As I wrote last week, Trump is either a racist or he isn't. If you think he should be president, fine. But you can't concede that he's a racist without explaining why you don't think that disqualifies him. Saying he's an odious bigot but he's our odious bigot isn't acceptable. And yet this is what folks like Speaker Ryan appear to be saying. They're willing to tolerate a little racism in their commander-in-chief if he's willing to dial it down and cooperate legislatively. To paraphrase Ryan, that's “the textbook definition” of moral cowardice.

In addition to the we-support-the-racist-so-long-as-he-stops-saying-racist-things position, the GOP has made itself vulnerable on another front. In an interview with Bloomberg Politics' Masters in Politics podcast, Senate Majority Leader Mitch McConnell said what we all know but never expected someone supporting Trump to admit: Donald Trump is unfit to serve as president.

Here's how McConnell summed it up: “He [Trump] needs someone highly experienced and very knowledgeable because it's pretty obvious he doesn't know a lot about the issues. You see that in the debates in which he's participated. It's why I have argued to him publicly and privately that he ought to use a script more often – there is nothing wrong with having prepared texts.”

Always cautious, the Kentucky senator quickly denounced Trump's race-baiting: “I object to a whole series of things that he's said – vehemently object to them. I think all of that needs to stop. Both the shots at people he defeated in the primary and these attacks on various ethnic groups in the country...I think he'd have a much better chance of winning if he would quit making so many unfortunate public utterances and stick to the script.”

Consider carefully what McConnell is claiming. First, he openly admits that Trump doesn't know what he needs to know in order to be president. If that's not disqualifying, what is? That he needs a vice president to explain the issues to him is an obvious sign that he's not prepared for the job. Second, and more disturbingly, he seems not to care what Trump actually believes, only what he says. There's no concern about the beliefs animating Trump's rhetoric. And that's the problem.

Most Americans don't want a racist in the White House, even if he's able to “stick to the script.” McConnell casually dismisses Trump's bigotry as “unfortunate public utterances,” but given his pattern of behavior since he launched his campaign, they appear consistent with who and what he is. In other words, it's not that Trump says racist things; it's that he's actually racist. (I've yet to meet a non-racist who habitually makes racist statements.)

If Trump isn't a bigot, he's pretending to be one. Either way, he has no business running for president of the United States. That Republicans are unwilling or unable to see this speaks to how desperate and unprincipled they are.