Orlando shooter's murky ISIS ties: Media should be cautious in how they report

It's still unclear how much contact Omar Mateen had, and emphasizing ISIS plays into their hands 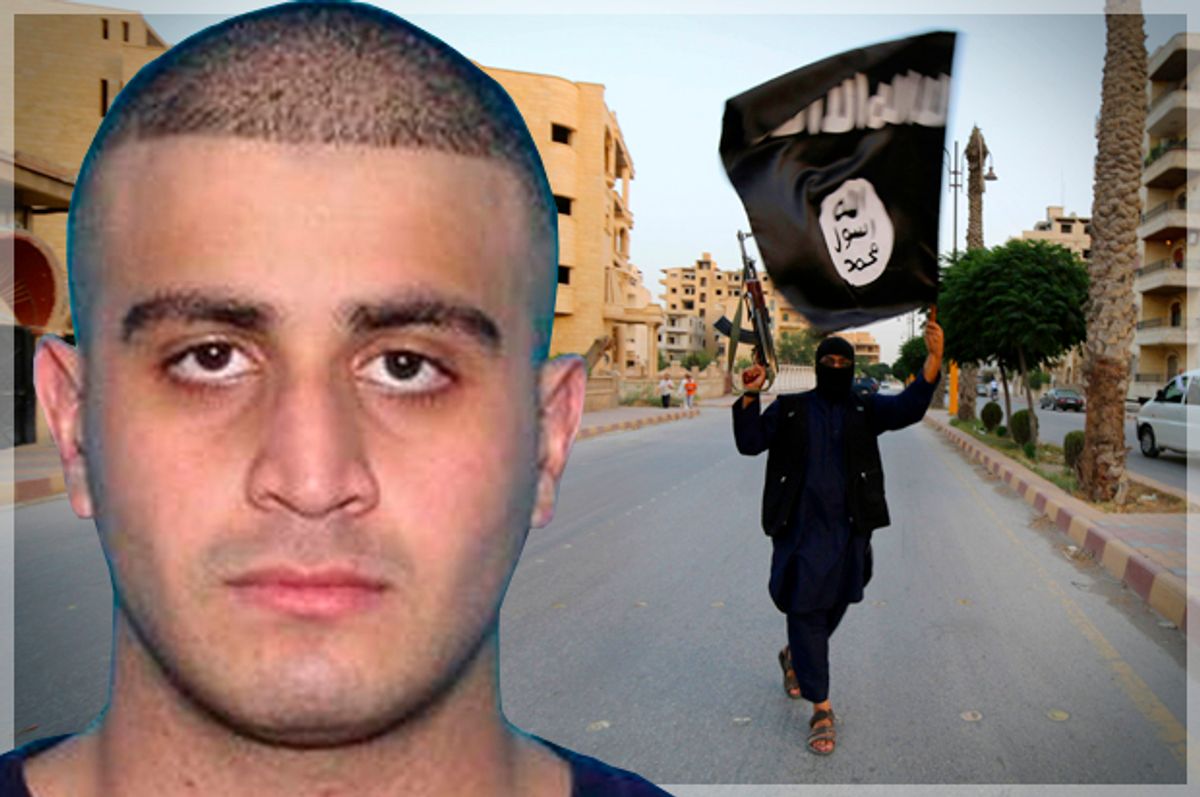 One of the most powerful ideas we’re left with after the Orlando shootings is that this was a project of ISIS – that the Islamic state orchestrated the attacks that killed 50 people at the Pulse nightclub. It fits neatly into a fear that a lot of Americans, regardless of their political orientation, hold – that it’s only a matter of time before the Islamic State infiltrates the United States and begins destroying us from within. Donald Trump has played up the image, saying that he saw this coming and returning to his controversial statement that we need to at least temporarily ban Muslim immigration.

But to a wide range of people, hearing that killer Omar Mateen took orders from a notorious terrorist group gave them a way to understand things.

It turns out, though, that Mateen’s ties to ISIS may be very limited. He announced himself as being inspired by the Islamic State soon before his shooting – and ISIS has asked people to stage attacks during Ramadan -- but the connection may have not gone much beyond that. ISIS has taken responsibility for the shooting, whatever the reality of its involvement.

It’s also looking like Mateen may have invented his relationship to the Boston Marathon killers, Tamerlan and Dzhokhar Tsarnaev – the possibility of which provoked an FBI investigation in 2013. According to The Guardian:

Some people close to the investigation consider Mateen’s unusual boast of terror ties to be relevant to understanding his motivations for attacking Pulse. The FBI investigation remains in its early stages, but his motive is the principal unsolved question. The invented connection to a prior terrorist act has raised some doubts around the sincerity of his pre-massacre pledge of allegiance to the Islamic State in a 911 call.

Isis quickly claimed credit for the attack, which had followed a call for violence by admirers during Ramadan. But US officials preliminarily consider Mateen not to have had any ties to the jihadist group, making him a so-called lone wolf attacker – if, indeed, his motivation was to attack the US rather than violent homophobia.

Similarly, the imam of Mateen’s mosque said that his attacks likely had nothing to do with Islamic terror. "When he finished prayer he would just leave," Imam Syed Shafeeq Rahmantold The Associated Press. "He would not socialize with anybody. He would be quiet. He would be very peaceful…. My personal opinion is that this has nothing to do with ISIS.”

But Mateen was also known to be mentally unstable and abusive to his wife. Was he in some ways a Dylann Roof – the Charleston shooter – but with Afghan ancestry to go along with his bigotry and violence?

Another reason to suspect that Mateen’s ISIS ties might be very slim is the group’s response to the Orlando shooting. As Business Insider reports:

After the Paris and Brussels attacks, ISIS' online channels encouraged supporters to blast out canned messages on their social-media accounts. Channels on the encrypted messaging app Telegram, which ISIS uses to send out information to supporters, asked followers to post canned messages celebrating the attacks and threatening more violence.

With the Orlando attack, there was no similar campaign.

So why should we be careful about how we describes and think about the attack? For media outlets – all scrambling to make sense of the tragedy -- calling it an ISIS production doesn’t just play into Trump’s fear-mongering. It does exactly what the Islamic State wants: It testifies to the group’s omnipotence.

“I think what the Islamic State has done is very clever, and that is create a situation where someone can carry out an attack without any direct link to the organization,” Charlie Winter, senior research associate at Georgia State University’s Transcultural Conflict and Violence Initiative, told the New York Times. “They can pledge allegiance to Abu Bakr al-Baghdadi before or during, and that catapults them from being a self-starter jihadist guy, or girl, to someone who can be lionized as a soldier of the Islamic State and regarded as a warrior.”

If the media doesn’t want to play into the hands of a terrorist group, they’ll be careful with this.