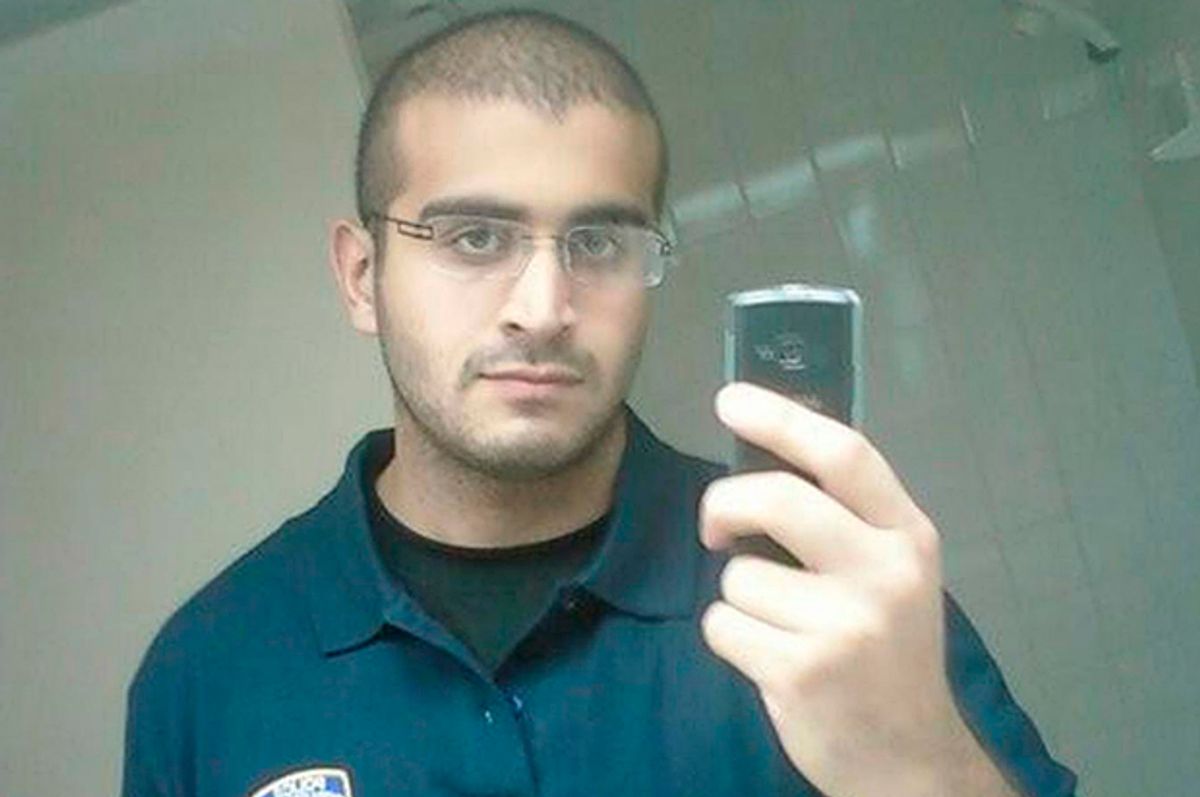 In the wake of the horrific shooting in Orlando that left 50 dead, a political struggle is forming on whether to define this act as an anti-gay crime or an act of radical Islamic terrorism.

The answer, it's quickly starting to seem, is both of these, and more. A picture is quickly starting to form of who Omar Mateen, the shooter, was. His ex-wife describes a man who was controlling and abusive. A colleague says he was always using racial and sexual slurs and "talked about killing people all the time." Both his ex-wife and his father describe him as homophobic, with his father saying he spun into a rage at the sight of two men kissing. He was clearly fond of guns, having not one, but two concealed carry licenses. He worked at a security firm, a career that can be attractive to men with dominance and control issues. He was investigated by the FBI in 2013 for making threats to a coworker.

There is a common theme here: Toxic masculinity.

Every time feminists talk about toxic masculinity, there is a chorus of whiny dudes who will immediately assume — or pretend to assume — that feminists are condemning all masculinity, even though the modifier "toxic" inherently suggests that there are forms of masculinity that are not toxic.

So, to be excruciatingly clear, toxic masculinity is a specific model of manhood, geared towards dominance and control. It's a manhood that views women and LGBT people as inferior, sees sex as an act not of affection but domination, and which valorizes violence as the way to prove one's self to the world.

For obvious political reasons, conservatives are hustling as fast as they can to make this about "radical Islam,"  which is to say they are trying to imply that there's something inherent to Islam and not Christianity that causes such violence. This, of course, is hoary nonsense, as there is a long and ignoble history of Christian-identified men, caught up in the cult of toxic masculinity, sowing discord and causing violence in our country: The gun-toting militiamen that caused a showdown in Oregon, the self-appointed border patrol called the Minutemen that recently made news again as their founder was convicted of child molestation, men who attack abortion clinics and providers.

Toxic masculinity aspires to toughness but is, in fact, an ideology of living in fear: The fear of ever seeming soft, tender, weak, or somehow less than manly. This insecurity is perhaps the most stalwart defining feature of toxic masculinity.

The examples are endless: Donald Trump flipping out when someone teases him about his small fingers. (Or about anything, really.) The ludicrously long and shaggy beards on "Duck Dynasty," meant to stave off any association with the dreaded feminine with a thicket of hair. The emergence of the term "cuckservative," flung around by hardline right wingers to suggest that insufficient racism is somwho emasculating. Conservatives absolutely melting down about an Obamacare ad that suggested that, gasp, sometimes men wear pajamas.

(This ad traumatized them so much that many conservative pundits are still freaking out, years after the fact, that the Obama administration dared suggest the emasculating fabric of flannel pajamas, ever touched the skin of the American male. Indeed, it's probably emasculating to suggest men have skin at all, since "skin" is such a ladified concept in our culture, what with the moisturizers and stuff.)

If toxic masculinity was just about men posturing around each other in a comical fashion, that would be one thing, but this persistent pressure to constantly be proving manhood and warding off anything considered feminine or emasculating is the main reason why we have so many damn shootings in the United States. Whether it's Islamic terrorism or Columbine-style shootings or, as is the case with some of the most common but least covered mass shootings, an act of domestic violence by a man who would rather kill his family than lose control, the common theme is this toxic masculinity, a desire on the part of the shooter to show off how much power and control he has, to take male dominance to the level of exerting control over life and death itself.

Toxic masculinity is also the reason it's so easy for men with major issues to get a hold of the high-powered weaponry necessary to commit these crimes. Sure, the pro-gun movement in this country likes to roll out a bunch of half-baked pseudo-arguments pretending at rationality to justify the lack of gun control in this country, but really, the emotional selling point of guns is that they feed the cult of toxic masculinity. Being able to stockpile weapons and have ever bigger and scarier-looking guns is straightforward and undeniable overcompensation insecure men, trying to prove what manly men they are.

That's why any attempt to discuss putting even the smallest, most commonsensical restrictions on guns turns into a bunch of right wing dudes squeeing about how the liberals are coming to taking their guns. This isn't a discussion being held on the plane of rationality, but is a psychological drama about these men's fears of emasculation, represented in an unsubtle way over their attachment to guns and their fear that liberals, stereotyped as effeminate in their imagination, are coming to steal the guns away.

And, of course, in the Orlando situation, we have the added problem of homophobia, which is called a "phobia" for a reason, since it's so often rooted in toxic masculinity and the terror of anything even remotely feminine.

What is particularly frustrating about all this is that, even though toxic masculinity is clearly the problem here, you have a bunch of conservatives running around and pushing toxic masculinity as the solution, as if all we need to end violence and terrorism is a bunch of silly posturing about who is the biggest man of all the menfolk out there.

Trump, of course, was leading the pack on this, posturing about how we need "toughness," which he appears to define as a willingness to tweet ignorant, belligerent nonsense. Posturing a lot, in general, is the preferred strategy of the toxic masculinity crowd in response to terrorism. Lots of chatter about how Democrats refuse to say "radical Islam," supposedly out of cowardice, and how the bravest and manliest of men will say it and the sheer force of the bravery demonstrated by the words they use will somehow be the magic ticket to ending the problem.

That, and, of course, you have the chorus of conservatives who imbue their tokens of toxic masculinity, guns, with near-magical powers to somehow stop the violence.

"Under Florida law, guns can’t be carried into bars," John Hinderaker of Powerline tried to argue. "So Pulse was a gun-free zone. That is one legal change that should be made."

The idea that a bunch of drunk people dancing around a nightclub are safer with loaded weapons on their bodies is clearly not coming from a rational place, but from a place of deep insecurity and gender weirdness that treats phallic symbols like they are magical totems. But the reality is that there was armed security at the club, an off-duty police officer who did engage Mateen, but failed to take him down. Our country is saturated in guns, and yet the mythical "good guy with a gun" who is promised to stop mass shootings has yet to actually produce himself. That is because the "good guy with a gun" is a myth, propped up to justify toxic masculinity's obsession with guns, and nothing more.

The horror story of Orlando lays bare what damage that this kind of dominance-oriented masculinity does to our society, right during an election when a overcompensating bully who is completely immersed in the discourse of toxic masculinity is the Republican nominee for president. It's a stark reminder of why we, as a country, need to get past the politics of tough guy posturing and move towards a more thoughtful, inclusive society. One with more dancing and less waving guns around while talking about what a manly man you imagine yourself to be.