“He doesn’t get it or he gets it better than anybody understands," Trump said of Obama 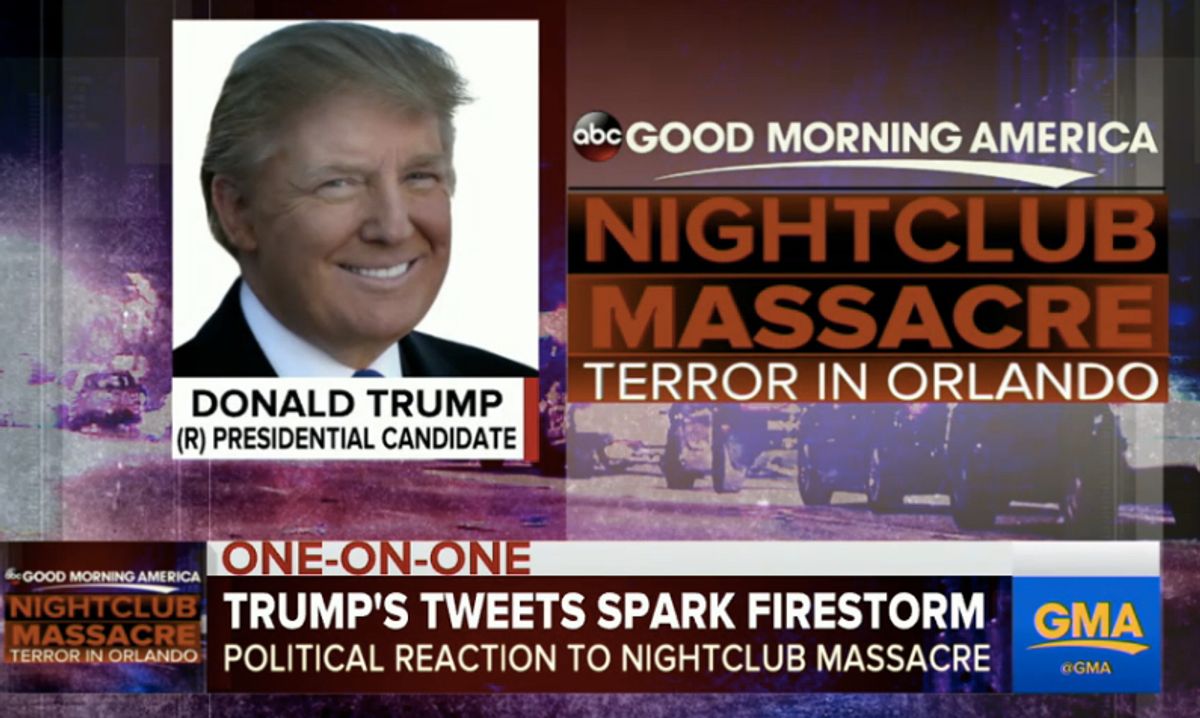 For months now, political pundits have predicted (warned) that the U.S. is one terror attack away from President Trump. The former reality TV star and self-professed cable news junkie has clearly gotten the message and has seized his moment in the aftermath of the worst mass shooting in modern U.S. history Sunday, bringing his unique brand of Birtherism to the tradition of right-wing demagoguery following terror attacks by so-called "Islamic" radicals.

Hours after it was announced that at least 49 people were murdered by a gunman in a Orlando gay nightclub, presumptive Republican presidential nominee Donald Trump gave a shout-out to all of his supporters who gave him "congrats" for "being right on radical Islamic terrorism" and called on President Obama to resign for failing to use the words "Radical Islam” in his description of the terror attack.

On Monday, Trump continued his victory lap on nearly all of the morning news shows, ramping up his attacks on President Obama.

"We are lead by a man that is either not tough, not smart, or he's got something else in mind," Trump told Fox News' Brian Kilmeade on his first stop to "Fox & Friends."

“He doesn’t get it or he gets it better than anybody understands," Trump continued, tooting the dog whistle of Birtherism. "It’s one or the other.”

Trump went on to imply that Obama has “got something else in mind” that prevents him from using the words “radical Islamic terrorism,” an obvious overture to the 43 percent of Republican voters who stubbornly believe that President Obama is a secret Muslim.

"People cannot — they cannot believe that President Obama is acting the ways he acts and can’t even mention the words ‘radical Islamic terrorism,'” Trump rambled on.

On ABC's "Good Morning America," Trump said that since the attack in Orlando, he was “getting thousands and thousands of tweets and letters and phone calls that I was right.”

“We have to have a ban of people coming in from Syria and different parts of the world with this philosophy that is so hateful and so horrible,” Trump argued, neglecting to mention that the alleged gunmen, Omar Mateen, is a U.S. born citizen whose parents immigrated from Afghanistan.

In an interview with “CBS This Morning,” Trump went on to target U.S. Muslims at-large, suggesting that the Muslim community tends to know “who the bad apples are, where the bad seeds are” but neglects to report them.