Authoritarian gun lovers: The gun lobby was never about freedom, and the Orlando massacre fallout proves it 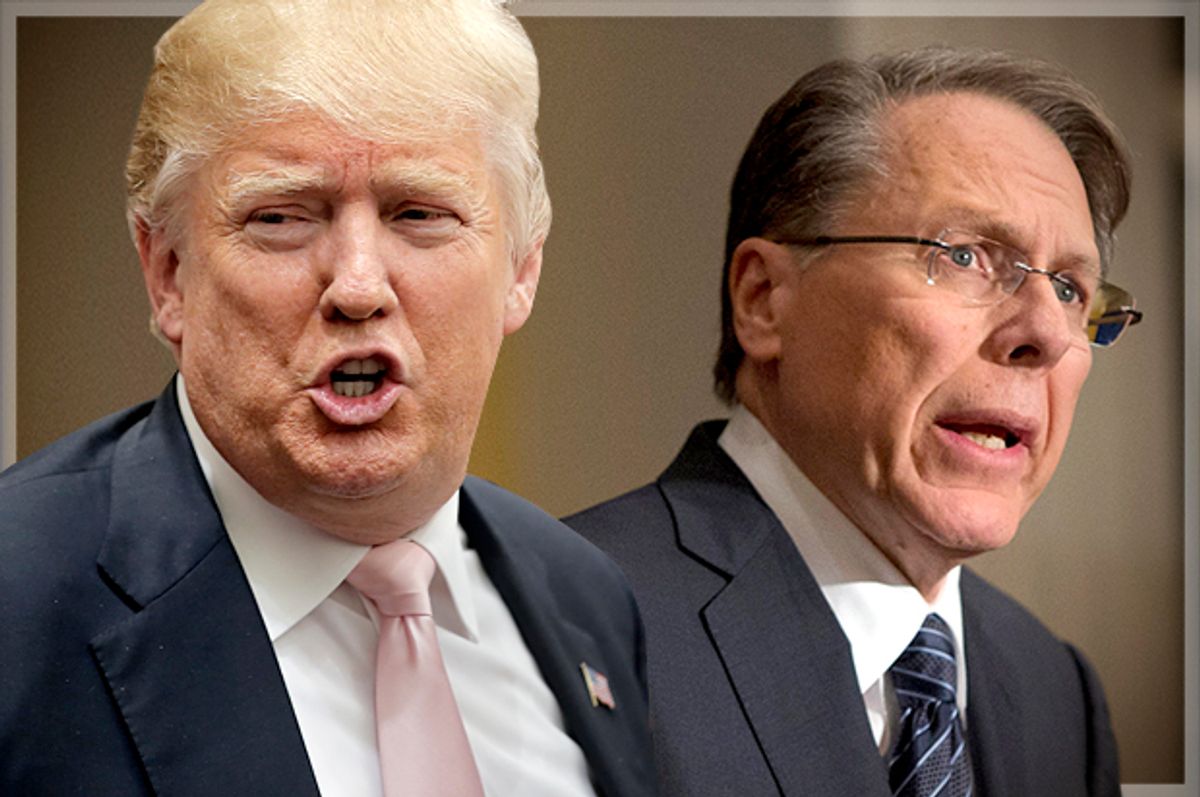 For decades, opponents of gun safety laws have styled themselves simply as freedom-loving Americans who just freely love freedom for freedom's sake, and not as, say, paranoid authoritarians whose obsession with guns springs from a psychosexual drama about gender and race. By and large, the mainstream media has indulged this self-framing from the gun humpers, calling the NRA a "gun rights" group instead of a gun industry lobby.

But the fallout from the shooting in Orlando over the weekend has made it clear that opposition to gun control is not and never was rooted in a fierce love of freedom. On the contrary, the events of the past 48 hours have only served as a sobering reminder that the same people who squawk about "freedom" when it comes to guns take a dim view of your freedom when it comes to roughly every other part of American life.

The most attention-getting and unsettling example is Donald Trump's speech on Monday, which, to quote the late Molly Ivins, "sounded better in the original German." Despite some disingenuous lip-smacking about the "LGBT community" — a phrase that Trump clearly struggled to pronounce correctly — the speech was largely a lambast aimed directly at freedom of religion and a screed against the basic notion of equality, accusing, as my colleague Simon Maloy wrote, "over 3 million Americans as knowing accomplices to acts of terrorism."

Having a major presidential candidate invoke conspiracy theories — even implying that President Obama is in on some ISIS conspiracy — is crossing from the kinda-sorta fascism category to sounding quite a bit like the paranoid conspiracy theories about Jews that flourished  in Nazi Germany.

And then, right after this terrifying diatribe, Trump reminded everyone of his hostility to freedom of the press yet again, revoking press credentials from the Washington Post in order to punish them for a completely accurate piece describing how Trump uses the wink-and-nudge technique to imply that President Obama is complicit with Islamic terrorism.

But while Trump was pouring hatred and bile over basic American freedoms, there was one "freedom" he still stood by: The right to own military-grade weaponry, just in case there's a roomful of people you need to kill in a hurry.

"[Clinton's] plan is to disarm law-abiding Americans, abolishing the 2nd amendment, and leaving only the bad guys and terrorists with guns," he lied.  (Here is Clinton's proposed policy.) "She wants to take away Americans’ guns, then admit the very people who want to slaughter us."

He then outlined a plan to meet with the NRA "to ensure Americans have the means to protect themselves in this age of terror."

So he opposes freedom of religion, freedom to move over borders, immigration, and our cherished press freedoms, but hey, he'll let you spend your money on a gun to shoot the imaginary terrorists coming to kick in your door. Got it. Yay, "freedom"?

Trump's invocation of the NRA is clearly more than welcome to the group, which takes a similar authoritarian stance where seemingly every freedom but the freedom to own guns is viewed darkly.

"The terrorist in Orlando had been investigated multiple times by the FBI," Chris Cox, the executive director of the NRA wrote in an editorial for USA Today. "He had a government-approved security guard license with a contractor for the Department of Homeland Security. Yet his former co-workers reported violent and racist comments."

Cox doesn't say exactly what the government was supposed to do here, though we can safely assume "deny Mateen the right to buy guns" is not on the list, since the NRA fights against efforts to make it harder for people will ill intentions to buy guns. Without concrete proposals, this instead reads as a jeremiad denouncing the right to due process and freedom of speech.

(The NRA should be careful before suggesting that the government should take action against people uttering violent fantasies or racist slurs, as policies to do so would rapidly deplete their base of paying customers who love guns.)

"Unfortunately, the Obama administration’s political correctness prevented anything from being done about it," Cox laments.

Conservatives might be opposed to "politically correct" ideas like same-sex marriage, religious tolerance, due process for all, efforts to end race and gender discrimination, and even a freedom so basic as the right to choose when you give birth, but hey, you get to spend a cool grand on an AR-15 and all its trimmings, and isn't that the only thing that really matters?

The horror in Orlando drives home, more than anything, the tension between what actual freedom looks like and what the right's gun policies lead to. After all, there is no better symbol of freedom than a gay nightclub, a place literally established so people can be free to be themselves. But, because of our lax gun laws, it turns out any random dude can take it upon himself to destroy that freedom and exact bloody revenge on gay people for their freedom.

As Dahlia Lithwick of Slate noted, the abundance of guns in our society has created "a perpetual hostage situation, in which one false move—or merely the choice to go to class, or to dance with friends—means you may wind up dead."

While there are still people out there who own a single handgun out of a (misplaced) belief that it makes them safe, an increasing share of gun owners are people, mostly men, who stockpile weapons because of the sense of power and dominance it gives them. That is not a freedom impulse. That is an authoritarian impulse.

The hypocrisy of conservatives on this freedom issue has been put in stark relief in the past few days, as Republican politicians kept trying to position themselves as sympathetic to the victims, even though these politicians have spent decades fighting as hard as they can to deny LGBT Americans basic rights.

The "moment of silence" and "thoughts and prayers" nonsense these politicians churn out isn't just a dodge to avoid a conversation about gun control, as it usually is. It's now also about dodging a discussion of their opposition to basic LGBT freedoms.

No wonder things came to a head Monday night, when head hypocrite Paul Ryan — who opposes the right of gay Americans to marry or adopt children, but keeps shooting down attempts to prevent people like Omar Mateen to get guns — tried to lead the House of Representatives in a moment of silence for the victims. Watching Republicans act all pious over the deaths of people they disparaged in life, killed by a weapon that Republicans have gone out of their way to make easily available, proved too much for many Democratic congresspeople. The House erupted in chaos as Democrats loudly denounced Ryan and his fellow hypocrites and then had a walkout in protest.

As they should. The notion that pro-gun forces are for "freedom" was always an obvious charade, but the mask has slipped completely. Now,  more than ever, it's important for those who truly support freedom to call out the conservative lie, and demand a society that's truly free for everyone, instead of one where we all live in fear of a authoritarian minority clinging to their guns.