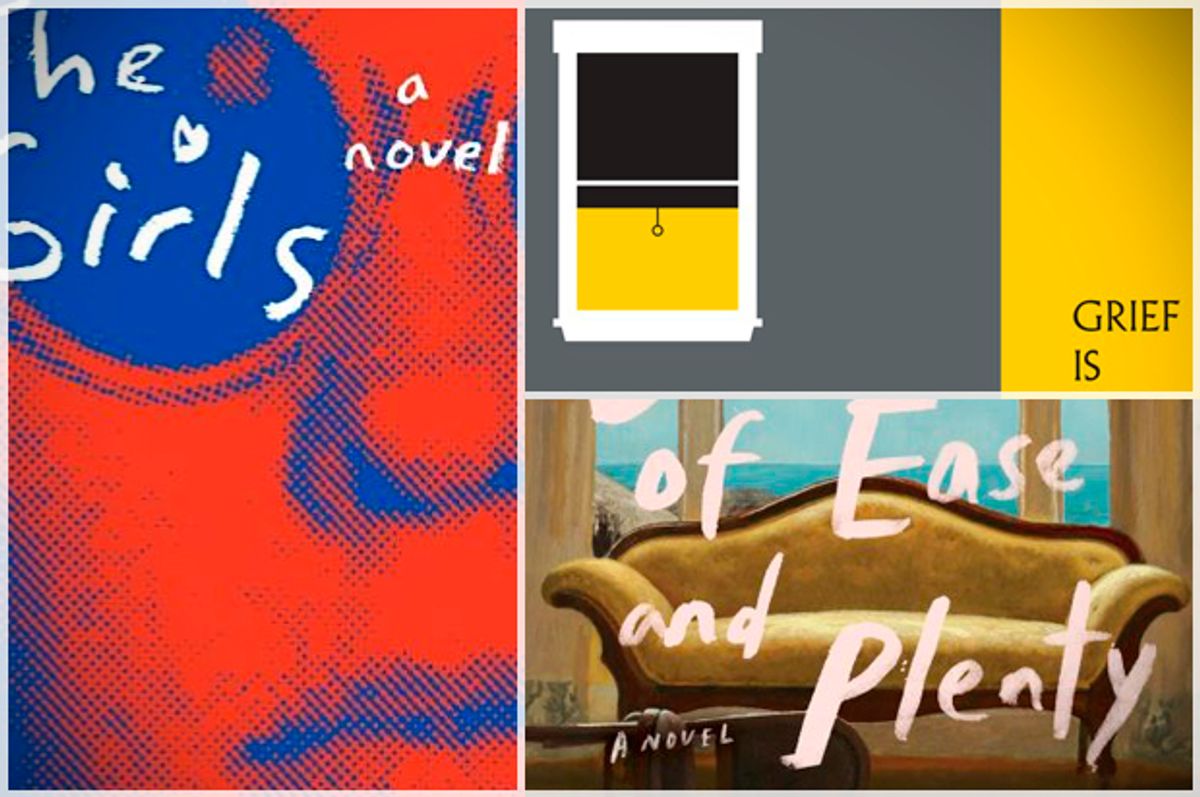 For June, I posed a series of questions — with, as always, a few verbal restrictions — to five authors with new books: Kate Angus ("So Late to the Party"), Ramona Ausubel ("Sons and Daughters of Ease and Plenty"), Emma Cline ("The Girls"), Max Porter ("Grief is the Thing with Feathers"), and Deborah Shapiro ("The Sun in Your Eyes").

CLINE: Sex, passivity and power, California mythology, female friendship, the violence of girlhood, how the past can take the present hostage.

PORTER: Dead parents, dead poets, stubborn dislike of algorithmic thinking about literary genres. Birds. Babies. I’m not sure about influence, but there are some permission givers without whom I would never have been brave enough to leap naked into a strange middle pond between prose and poetry, between fable and essay.

AUSUBEL: Revolution, 1970s wallpaper design, pregnancy and motherhood, guilt, my grandfather’s sailboat, the idea of California, the money that no longer is.

SHAPIRO: Clips of David Bowie on talk shows in the 1970s, the William Eggleston photograph we were lucky enough to use for the book’s cover, images of Gram Parsons, Big Star’s "Third/Sister Lovers," long summer days in college in the ‘90s, fashion magazines, outer-borough New York, the Catskills, Los Angeles.

ANGUS: Grad school. Unemployment. Teaching. Starting/running an independent press. Falling in and out of love (twice). The Internet. Tumbling into and then clawing my way out of a pretty bleak depression. Travel. CrossFit. Trying—and failing—to read "Moby Dick."

CLINE: I dislike the word “luminous” which seems only used to describe writing by women.

ANGUS: “Ugh, this is just awful tripe. It reminds me of the Onion article “Two Hipsters Angrily Call Each Other ‘Hipster.’”

SHAPIRO: Years ago someone told me my writing could use more “Olympian distance.” So I tried to get that distance. And then I put that phrase in my novel.

PORTER: I’m yet to despise. But a certain tone-deaf misunderstanding of my intentions regarding affectionate critical literary homage has pissed me off. Like a lot of people I wish to see the tyrannical reign of ‘quirky’ end soon. My Crow will peck the fucking eyes out of quirky.

PORTER: I’d like to be a forest balladeer, roaming from wood to wood making music, telling stories, caring for the trees. But I recognize that the dripping sickliness of that cliché should have me banished to the accounts department of Gazprom for eternity.

ANGUS: My use of the second person is on point and I think I’m pretty good at similes. But I have genre envy and wish I had the sustained drive and long-term planning skills of novelists. I’m amazed by other writers who are able to do things like come up with a plot, develop characters, write about things other than the shifting landscape of their own brain.

PORTER: Ah shit, I have no idea. I’m good at nonsense verse. I’m good at sentimentality and I think I’m getting better at checking or interrogating sentimentality when it creeps in. I’d like to try and write a proper book and then answer this question, but I imagine the answer would be that I would like to be better at PLOT.

SHAPIRO: I think I have an ear for dialogue. Plot, if we’re talking about the unfolding of events, is not usually my main concern as a reader, so it doesn’t come all that easily to me as a writer. Though I try! But if we mean plot as tied to character, to the ways that characters are shaped by certain conflicts and desires and how that drives their actions, behavior, and perceptions – that’s something I think I’ve gotten better at over time, as many writers tend to.

AUSUBEL: I’m good at following the weird leads. I am up for disassembling everything in revision (over and over). Plot takes work, language is a joy. I hope to keep getting better at all the parts.

CLINE: I think I’m good with descriptions and a kind of psychological reporting. I’d like to get better at extending the scope beyond a single narrator or consciousness.

AUSUBEL: Articulating the human experience requires all the voices.

ANGUS: I assume that they don’t. But I keep writing anyway.

SHAPIRO: I’m generally curious to know what other people think about things, and I’d hope that people would extend that same kind of curiosity to me. Ideally, I see the writer-reader relationship as something generous, a form of communication, and then it isn’t a question of hubris so much as connection. But that doesn’t make the all-too-frequent self-doubt any less paralyzing.

PORTER: She’s called Jess, and we’ve been in love since we were teenagers. The second it invades my mental space I run this notional interest you describe past her and she pops it like the lethal balloon of hot air it is. And then we drink tea and discuss the latest episode of "Suits."