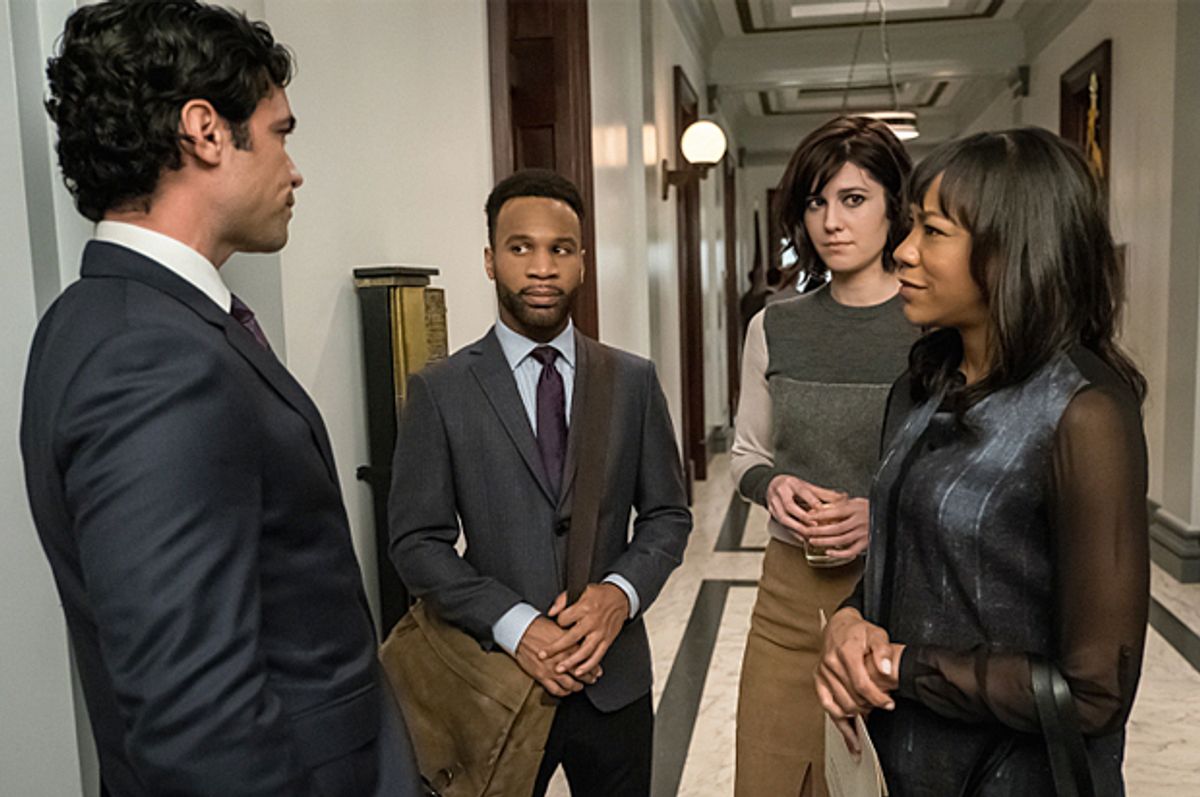 Well, that explains a lot.

For all of us shaking our heads as to politics has become so polarized, so nasty, a new television show has a theory: Insects are crawling into the heads of politicians and influential citizens, turning them all into speechifying beasts of partisanship. And these bugs come from a meteor that crash-landed somewhere in Russia but was transported to the Smithsonian for a research project. "In the year 2016 there was a growing sense that people were losing their minds,” the first episode announces. “And no one knew why ... until now."

And the Cars song “You Might Think” has some of dastardly but unexplained role in the whole thing.

It’s to the credit of “BrainDead,” a series on CBS by Robert and Michelle King, creators of recently-shuttered "The Good Wife,” that the goofy premise is not enough to destroy the show. In fact, “BrainDead,” which premiered last night, is mostly winning, with appealing actors, some decent plotting, and just the right amount of Washington, D.C. satire. It’s not relentlessly foul-mouthed like “Veep,” not corrosively cynical like "House of Cards,” and not brilliantly layered like “The Americans.” If “BrainDead” can figure out its tone – which could be a challenge –it could become a very welcome part of the weeknight cycle.

The initial episode began with Laurel Healy (Mary Elizabeth Winstead), an idealistic, financially strapped documentary filmmaker from Los Angeles, moving to D.C. as a way to pay off her student loans. She’s working for her brother Luke, a smarmy United States Senator (Danny Pino) who’s trying to position himself for a major role in the party while also carrying on an affair and negotiating a government shutdown.

The stakes slowly unfold throughout the premiere: Important characters begin to transform into gleefully happy, ideologically rigid versions of themselves, including, consequentially, a pliable Republican Senator (Tony Shalhoub) who becomes stubborn and inflexible. The plot moves forward in a straightforward but effective way. How long will the government be shut down? Will Laurel become an effective player in her brother’s office? Will these weird bugs keep crawling into people’s ears?

The problem is that the tone is so slippery it’s not clear whether this show wants to be a breezy look at D.C. politics, with Laurel as the audience’s guide, or a ‘50s science-fiction movie. One character we’re just starting to get to know, for instance, meets with a grotesque and horrible fate, and it’s played for laughs. Gruesome violence and sudden deaths are the rule in television these days, especially on cable, but “BrainDead” has enough heart -- here and there -- that it still feels dissonant. We’re suddenly in an Ed Wood film.

To some viewers, the sheer silliness may be the show’s best virtue. But something about it makes it seem simultaneously too light and too heavy – taking politics and people seriously at times, but then going all goofy. By the second episode, which airs next Monday, we're moving deeper into camp and “BrainDead” loses some of its charm and narrative drive.

The best thing about “BrainDead,” besides Winstead’s performance, is that it’s weirdly innocent. It doesn’t take sides – both parties are made up of a mix of good and bad – and under the surface, "BrainDead” wants everyone to get along. Partisanship, which comes from the skies, is the enemy, not the politicians in the nation’s capital. In the middle of one of the harshest elections in the nation’s history, it’s refreshing to think that our problems come from outer space. That’s may not be the way things really work in Washington. But isn’t it pretty to think so?