The do-nothing-about-guns party: The GOP's loyalty to the NRA rises above keeping weapons from suspected terrorists 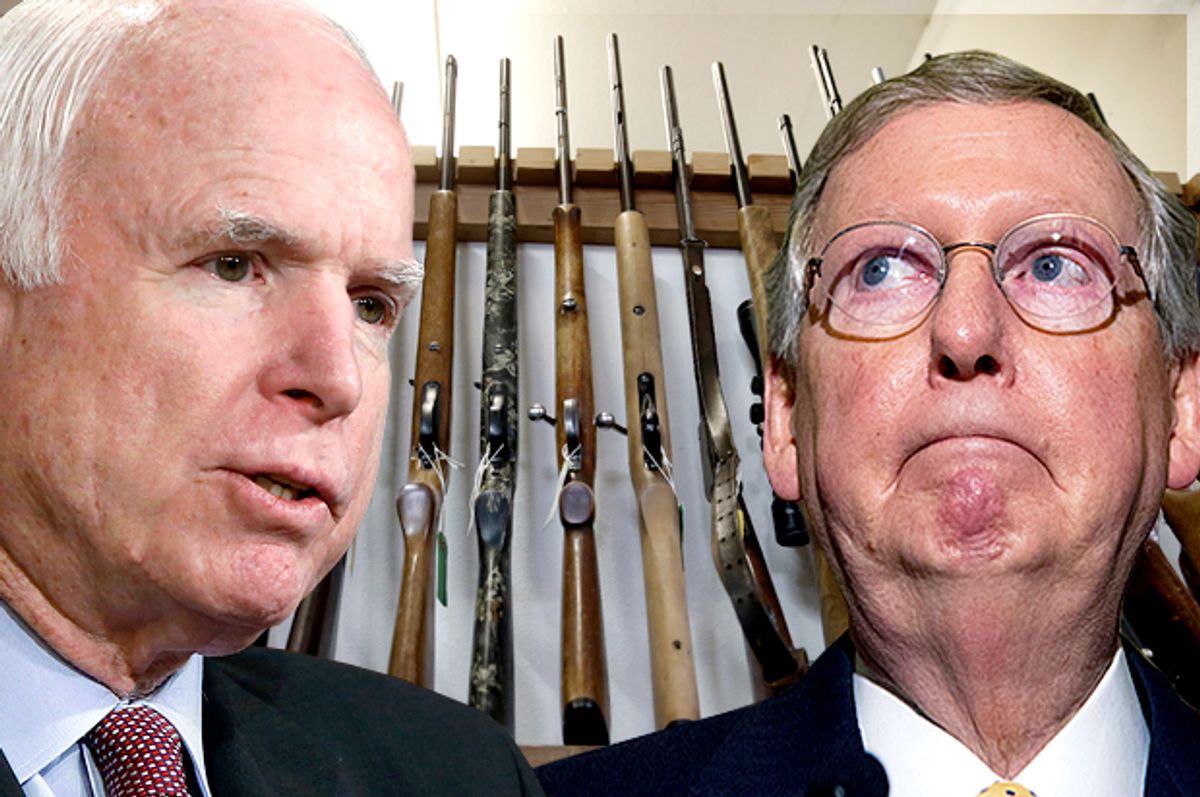 In the months following the Sandy Hook massacre, the FBI received word of a New York-born man named Omar Mateen, who, according to The New York Times, had been bragging to co-workers about his affiliations with terrorist groups. During the following year, Mateen was again the subject of an investigation -- this time in pursuit of allegations that he was linked to "an American who went to Syria to fight for an extremist group." An FBI official characterized Mateen's contact with the Syria-based suicide bomber as "minimal." Consequently, Mateen was removed from the FBI's Terrorist Screening Database. One of many tragic roadblocks that led to the massacre in Orlando.

Consequently, Mateen easily purchased an AR-15 style rifle just a few days before using it to unleash a nightmare of cinematic proportions. Throughout the weekend, with bodies strewn on the floor of the Pulse nightclub, nearly every political debate on social media and elsewhere orbited around who or what was to blame for Mateen's act of terror, beginning with Mateen himself and descending through a crowd-sourced list of usual suspects.

We're all familiar with the roster of shibboleths emerging from all sides of the debate, but if you happened to have opposed a 2015 law, known as Senate Amendment 2910, banning suspects on the federal terrorism watch list from buying firearms, deflecting blame to Mateen's alleged ISIS connection is probably not your best option. Making this all about terrorism, as Donald Trump has, only serves to emphasize the GOP's inability to pass 2910. Sure, the conservative entertainment bubble will allow it. Trump will clearly dedicate his pathetic, clown-haired blurts to blaming terrorism while playing the Obama-is-a-secret-Muslim card. Rationality and logic, on the other hand, won't allow such contradictory gibberish. The GOP refused to act on 2910 because, in the face of the National Rifle Association's Mafia-like extortion tactics and raw spending power, the Republicans chickened out and, save for one senator, voted in lockstep, 54-to-45, to strike down 2910.

The party that practically branded the concept of patriotism, along with its branding of 9/11 and the war on terror, collectively decided that banning suspected terrorists from purchasing AR-15s and the like is a bridge too far. It's okay, of course, for your civil liberties to be annihilated in pursuit of smoking out the evildoers. Fifteen years ago, a would-be terrorist tried to blow up an airplane by igniting explosives in his shoes, and totally botched the whole thing, yet, as a result, we all have to practically strip naked before boarding an airplane. Meanwhile, in the wake of San Bernardino, where an AR-style rifle was used, the GOP chose to do... nothing.

It'd be foolish to ignore the connection between Omar Mateen and the threat of Islamic terrorism, if only to point out Mateen's wanna-be desperation for acceptance into the ranks of the Islamic State. Even though I identify as liberal, I don't deny or downplay the threat of both Islamic and politically-motivated domestic terrorism. Liberalism and concern over the ISIS threat aren't mutually exclusive. Much to the contrary. However, whether fellow liberals acknowledge the terrorist threat is mostly irrelevant. Conservative Republicans almost universally do, and so this watch list vote on 2910 was a colossally glaring example of nauseating hypocrisy. The self-proclaimed anti-terror party refused to act to prevent suspected terrorists from freely buying the deadliest consumer products available. Indeed, had the FBI continued to track Mateen via the terror database; had the Senate Republicans voted in concurrence with their usual anti-terror platform; and had the GOP not pledged mindless fealty with the NRA, it's possible that Orlando might not have happened.

Yes, Mateen was, at the very least, inspired by ISIS. Yes, Mateen was a raging homophobe, based partly in his religious beliefs. And, yes, Mateen was too-easily allowed to buy a pair of firearms enabling him to easily mow down dozens of young people at Pulse. These are all facts, which, together, are difficult to reconcile for a Republican Party that's made its bones by demonizing gays, by demanding easy access to semi-automatic rifles, and by blocking a law designed to keep guns from terrorists. The party of personal responsibility needs to practice what it preaches today and confess to its trifecta of hate and ineptitude. Perhaps the accountability can come in the form of revisiting legislation like an assault weapon ban, or, at the very least, the expanded background checks amendment. But don't hold your breath. Republicans need the homophobic pro-gun vote, even though a similarly ignorant worldview -- one that marginalizes LGBT citizens and which routinely prioritizes "Second Amendment solutions" -- motivated Omar Mateen.

Seldom, in the wake of these massacres, has there been such a direct linkage between GOP inaction on practical gun control measures and an actual gun massacre. If we couple the GOP's atrocious vote against 2910 with its ongoing genuflection at the feet of Wayne LaPierre, culpability becomes even more obvious. After Sandy Hook, expanded background checks were supported by 72 percent of NRA members, along with 83 percent of gun owners. For the GOP, it wasn't enough to overcome its loyalty to LaPierre whose influence is clearly stronger than an overwhelming super-majority of voters, and so the measure died even while the tears and grief from Sandy Hook were still fresh. In fact, sitting members of Congress trolled gun control activists by holding at least two contests in which Bushmaster AR-15s were the prizes -- the very make and model of Adam Lanza's weapon of choice. And last year, not even the dreaded threat of ISIS and its videos of beheadings and immolations were enough to supersede LaPierre.

Even with a menu of numbers and facts to the contrary, we're told we should focus exclusively on ISIS and whether Obama spoke the words "radical Islamic terrorism." If this was exclusively about terrorism, how the hell can Trump and the others reconcile the party's opposition to 2910, not to mention other sensible gun restrictions? The answer is simple: they continue to operate with impunity by shoving the story through the meat grinder of Fox News and AM talk radio, producing enough reasonable doubt in the form of distracting zingers to obfuscate the path to accountability.