Trump is massively unpopular: The GOP's 2016 nominee is killing their prospects with Latinos 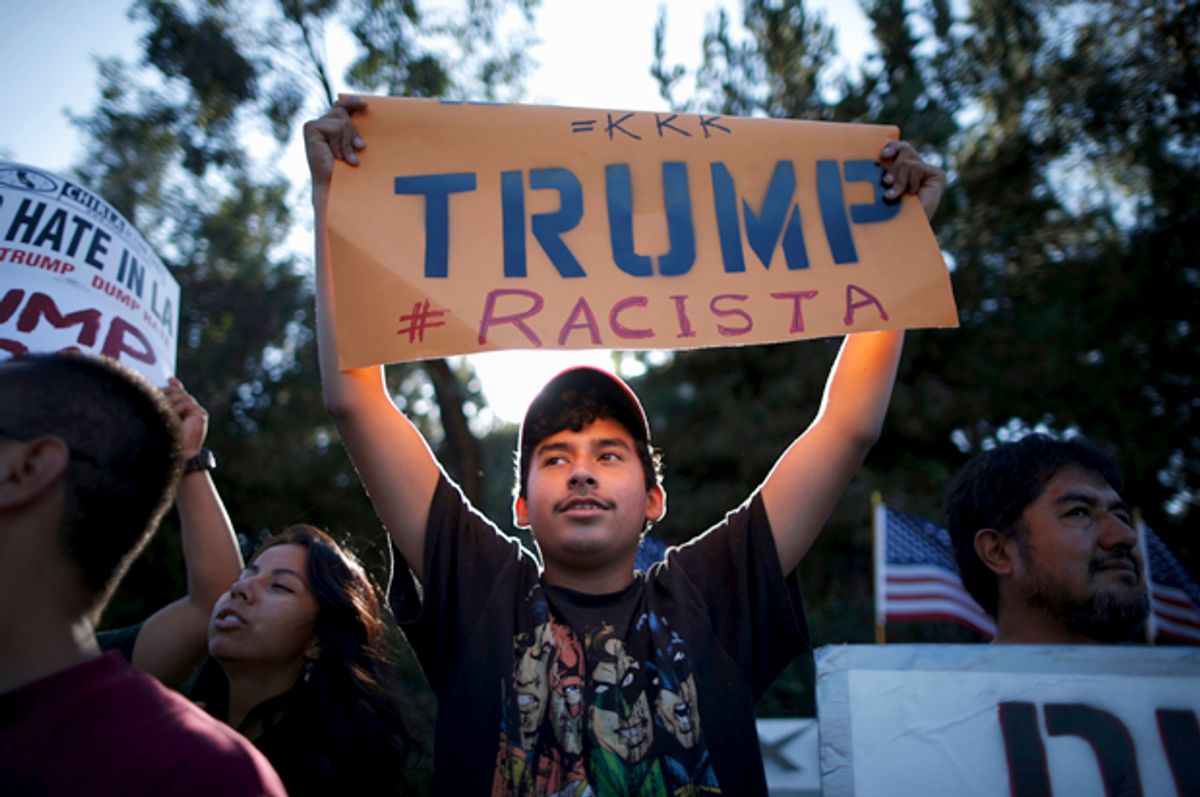 The word “unpopular” doesn’t adequately capture just how broadly and deeply loathed Donald Trump has become in the weeks since he became the presumptive Republican nominee for the presidency. He was never especially popular with the broader electorate, but after a month or so of expounding at length on the dangers of “Mexican” judges and the global Muslim population, Trump finds himself about as popular as irritable bowel syndrome.

The latest poll from the Washington Post pegs Trump’s unfavorable rating at a staggering 70 percent. Most other polls conducted over the past two weeks put him somewhere around 60 percent unfavorable. Trump’s own personal odiousness is an obvious contributing factor here, but so is the fact that Trump has been absorbing attack after attack from the Democrats without any coherent pushback and without any support from the Republican establishment. He clinched the nomination, and then imploded almost immediately.

When you dig a little deeper into the polls, you start to see just how catastrophically bad Trump’s candidacy could be for the GOP in the long-term. Trump’s base continues to be white men, a demographic Republicans already dominate in presidential elections. The problem for Trump – and for the GOP – is that there just aren’t enough white guys out there to elect a Republican to the White House. The party understands that it needs to expand its appeal and draw voters from other demographic groups, but Trump’s toxicity is making that impossible, particularly with regard to one of the most critical emerging demographic groups: Hispanics.

There’s no ambiguity about how Hispanic Americans feel about Donald Trump: they just plain hate the guy. The Post poll referenced above shows that 89 percent of Hispanics view Trump unfavorably. An Economist/YouGov poll from earlier in the month shows 76 percent unfavorability among Hispanics. Republicans already have a disadvantage with this demographic given that the GOP platform is generally unpopular with Hispanic voters, and nominating a wall-building nativist who says a Mexican-American judge can’t be trusted is obviously going to exacerbate that antipathy.

Making matters worse for the GOP is the fact that the party has all but ceded its immigration policymaking to Trump. House Speaker Paul Ryan has been slowly rolling out a series of policy proposals this month that are intended to demonstrate that the GOP has “ideas” that do not spring from the manic sociopathy of its presidential nominee. The proposals address poverty, national security, economic regulation, and a few other areas, but they leave immigration policy largely untouched. Ryan’s report on national security stresses the importance of border security and the need to “overhaul our immigration system for national security reasons,” but its focus is primarily on combatting terrorism.

This immigration policy vacuum is being eagerly filled by Trump, who saturates the airwaves with braggadocio about building giant walls, deporting every undocumented immigrant, and starting trade wars with Mexico. He does this as high-ranking Republicans like Paul Ryan, Mitch McConnell, and others make clear that they will support Trump in the general election, even as he spouts off offensive nonsense about immigrants and Latinos. And they stand by Trump even as they recognize the damage he could inflict upon the GOP:

"It did define our party, for at least African-American voters, and it still does today," he told a television interviewer. "That was a complete shift that occurred that year, and we've never be able to get them back."

McConnell is correct – this stuff isn’t quickly or easily forgotten. And Republicans can be sure that in future election cycles the Democrats will do everything within their power to remind Latino voters of who stood with Donald Trump.