Epic downfall: Trump is slowly losing the GOP, but the GOP has already lost the country

How do Republicans get out of this? Their unfavorable rating is a record high — and Trump's to blame 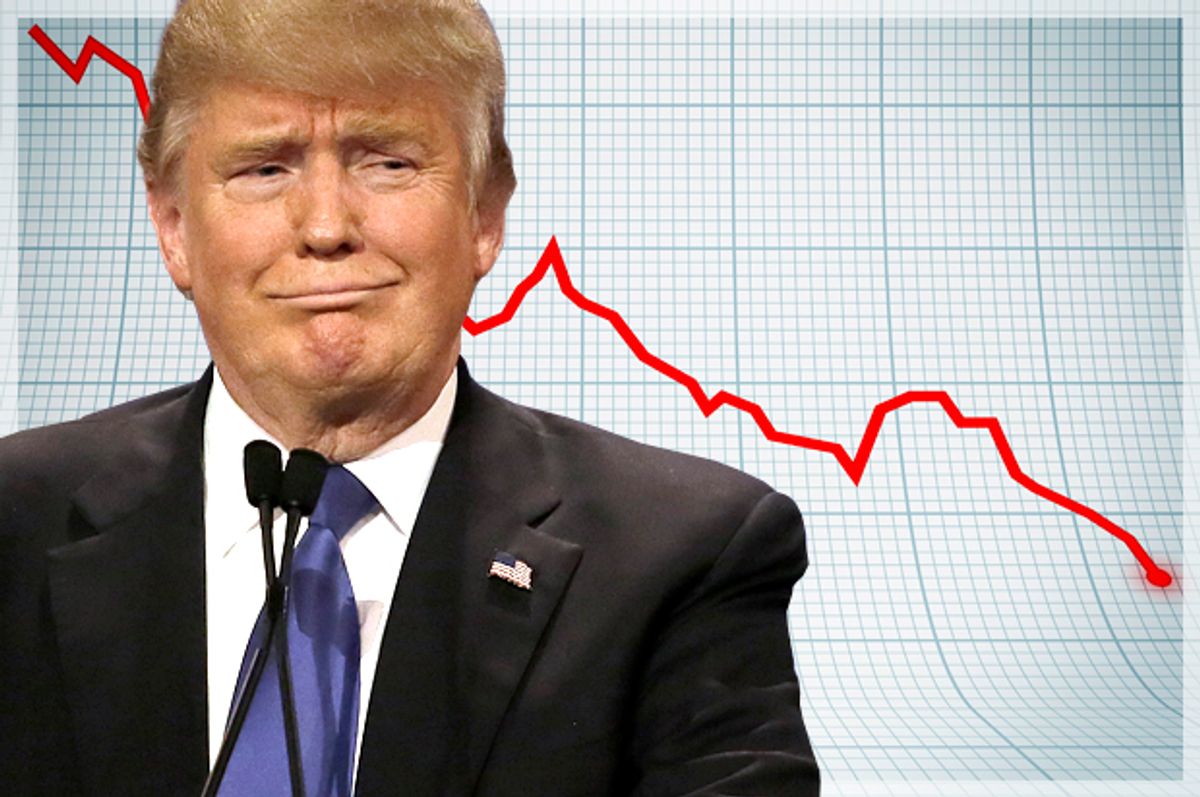 The Republican Party is in a bad way. It was assumed that the Republican brand would be diminished with Trump at the top of the ticket, but the latest numbers suggest it's worse than expected. According to a Bloomberg poll, only 32 percent of Americans view the GOP favorably, the lowest level recorded since the poll began in 2009. 49 percent of Americans view the Democratic Party favorably, which isn't great but close to the historical average. This is terrible news for Republicans concerned about the future viability of the party. And there's little doubt what's behind the numbers. “This is obviously related to perceptions of Trump,” said pollster J. Ann Sezler, who spearheaded the survey. “This bleeds out into perceptions of the party and to other GOP politicians.”

The GOP's popularity has dropped precipitously since 2015, when the presidential campaign kicked into gear. Much of it has to do with weariness among Republicans. In December 2014, for example, 9 percent of Republicans held unfavorable views toward their own party. Today close to 33 percent of Republicans say they feel unfavorably about their party's nominee. By contrast, just 17 percent of Democrats are unfavorable toward Clinton, and that's in the wake of a protracted primary contest. By November Democrats will be far more unified. Meanwhile, Republicans fragmentation is likely to increase. Just this weekend, in fact, Mitt Romney held a retreat in Utah during which hundreds of GOP donors and officeholders lambasted their nominee and grilled Republicans who have refused to take a stand against him. This sort of internal opposition is unheard of in recent history.

On MSNBC's “Morning Joe,” former Republican presidential candidate John Kasich said he has no plan to vote for Trump in November, despite pleding to do so months ago. “I'm sorry this has happened,” Kasich told Scarborough. “We'll see where it ends up. I'm not making a final decision yet but at this point I just can't do it.” Even House Speaker Paul Ryan and Foreign Relations Committee chairman Bob Corker, while they haven't rescinded their endorsements, expressed serious concerns about Trump's unsavory response to the Orlando massacre. The pressure on them and others will, eventually, be overwhelming. The tepid endorsements and non-defenses won't suffice for much longer.

To make matters worse, Politico is reporting that Trump's relationship with the RNC is rapidly declining. Trump is relying on the RNC to bolster his non-existent ground game in crucial swing states, but so far strategic differences have sullied attempts at coordination. “I don't think we are going to take a lot of political advice from Preibus [the RNC chairman],” one Trump campaign official said. “From my perspective, we should not be relying on the RNC for much, because I'm not sure they are fully supportive yet.” This frayed dynamic will intensify as Trump doubles and triples down on his incendiary positions.

There is no easy way for Republicans to circumnavigate the Trump problem. You have a pathological racist leading the ticket, a man with no fidelity to anyone but himself. He's just as willing to attack his party as he is Hillary Clinton. “You know, the Republicans, honestly, folks, our leaders – our leaders have to get tougher,” Trump told supporters on Wednesday. “This is too tough to do it alone. But you know what? I think I'm gonna be forced to. I think I'm going to be forced to.”

These are the words of a deranged narcissist. Yes, there will be a small subset of the population that responds to this fascistic rhetoric, but it will alienate the majority of the country. And it will gradually degrade the Republican brand. If the party doesn't cut ties entirely with Trump, the recent Bloomberg numbers are only the beginning. The Republicans who endorsed Trump clearly don't have any principles to uphold, but now they've got an incentive they can work with: self-preservation.