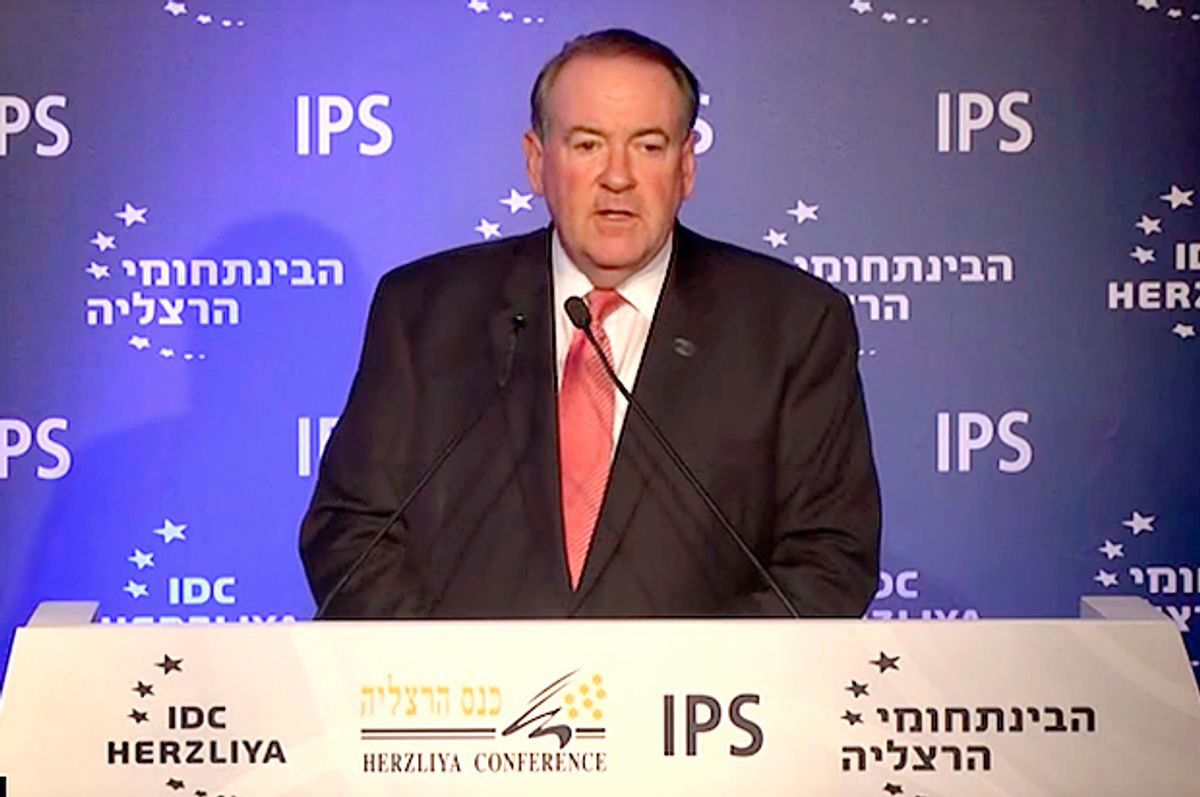 "I have seen biblical prophecy fulfilled" in Israel, Mike Huckabee declared. "And no one can deny that."

The prominent Republican and former governor of Arkansas spoke on Wednesday at the Herzliya Conference, which describes itself as "Israel's primary global policy annual gathering."

Huckabee espoused extreme Christian Zionist views and insisted there will not be a two-state solution in Israel-Palestine.

He also slammed the Iran nuclear deal, declaring, "It is unacceptable in every way for us to ever enter into any arrangement with the current government of Iran."

Huckabee, who ran as a Republican presidential candidate in the 2008 and 2016 elections, is a hard-line right-wing Christian. He made an array of religious references in his speech.

As Salon reported in another article, Huckabee also warned “radical Islam is a threat to all civilization” and insisted Republicans aren's waging a war on women, but Muslims are.

He said that his first trip to Israel was in 1973, at age 17. "And from that forward, I have had an extraordinary love of this country," Huckabee added.

He went so far as to explicitly deny that the ongoing violence in Israel-Palestine is about politics. "This is not a conflict about land; nor is it a conflict about power. It’s a conflict over existence," he insisted. Israel simply faces “an existential threat.”

Huckabee did not once acknowledge Israel's ongoing illegal military occupation of the Palestinian territories, which entered its 50th year this month. Neither did he mention Zionist militias' ethnic cleansing of Palestinians in the war that established Israel in 1948, nor the 5 million Palestinian refugees who live around the world today.

"The idea that there is going to be what is often referred to as a two-state solution I believe is naive," Huckabee said, adding that he knows it might not be "politically correct" or "diplomatic" but was compelled to say it.

Hard-line right-wing Israeli Prime Minister Benjamin Netanyahu was re-elected on the promise that there will never be an independent Palestinian state, although he later tried to walk back his pledge.

Huckabee, who has previously insisted that abortion is worse than the genocidal Nazi Holocaust, said he has visited Israel so many times that he has "lost count" of the number. He recalled traveling there with his wife during Israel's summer 2014 war in Gaza, in order to "show solidarity."

He insisted that the international response to Israel's well-documented atrocities was "unfair." Huckabee condemned the cessation of flights into Israel during the war, pointing out Israel was “perfectly safe.” Yet he later maintained that Palestinian militants are an "existential threat" to Israel.

He said he was "greatly offended" by the "moral equivalency" created between the Israeli military and Palestinian militants. Huckabee called this "nonsense."

Instead of talking about the actual facts of the war, he invoked the image of a propaganda cartoon widely circulated by the Israeli military that depicts an Israeli soldier fighting in front of a woman with a baby carriage, while a Palestinian fighter stands behind a woman and her baby carriage.

In reality, the atrocities committed by Israel scarcely compare in any way to those committed by Palestinian militants. Israel killed more than 2,250 Palestinians in the 51-day summer 2014 war, known as Operation Protective Edge. According to the U.N., roughly two-thirds of those killed were innocents — 1,462 civilians, including more than 550 children.

Just 3 percent of Hamas rockets actually reached populated areas in Israel, and even then they caused little damage, according to MIT researcher and former U.S. government official Subrata Ghoshroy.

Meanwhile, Israel injured another more than 11,200 Palestinians, including more than 3,400 children, the U.N. calculated. Roughly one-third of these children were permanently disabled.

Huckabee, however, stressed that drawing a "moral equivalency" between the two sides is "nonsense."

Leading human rights organizations, on the other hand, including Amnesty International and Human Rights Watch, accused Israel of war crimes in its bombing of the densely populated Gaza Strip, upon which Israel has imposed what U.N. experts say is an illegal blockade for almost a decade.

In fact, Israeli veterans who fought in the war told an Israeli NGO that they indiscriminately attacked Palestinian civilians, shooting Gazans out of boredom. The Washington Post said Israeli “soldiers described reducing Gaza neighborhoods to sand, firing artillery at random houses to avenge fallen comrades, shooting at innocent civilians because they were bored.”

In an attempt to claim moral superiority over Muslims, Huckabee went on to declare, "We certainly don’t name streets and make heroes out of terrorists."

Nevertheless, as Salon pointed out when Hillary Clinton made similar accusations in her hard-line pro-Israel speech at the 2016 AIPAC Policy Conference, Jewish extremist and mass murderer Baruch Goldstein is admired in some segments of Israel today.

In February 1994, Goldstein massacred 29 Muslim worshipers at the religious site the Cave of the Patriarchs. Today, some portray Goldstein as a martyr. His grave is a popular pilgrimage site for Israelis; its epitaph describes the Israeli terrorist as a man of “clean hands and a pure heart” who “gave his life for the people of Israel.”

Later in his speech, Huckabee lambasted Iran, asserting, "It is unacceptable in every way for us to ever enter into any arrangement with" its government.

"The so-called deal with Iran is so utterly unacceptable," he said. "It is disastrous; it is dangerous. And I hope and pray that that deal will be rescinded."

Huckabee called the Joint Comprehensive Plan of Action, the international nuclear agreement between Iran, the five permanent members of the U.N. Security Council and the E.U., an "ill-fated and tragic deal."

He applauded Netanyahu's "courageous" speech to Congress in March 2015, in which the Israeli prime minister tried to convince U.S. lawmakers to oppose the deal their president had helped negotiate for years.

Huckabee went on to smear the BDS movement, which he called “boycott, divestiture and sanctions” (the D actually stands for divestment, not divestiture). He also claimed Afghanistan is in the Middle East, even though the country is actually in South Asia.

The former Republican presidential candidate drew his speech to a close stressing that Jerusalem is the real capital of Israel.

"The notion that Jerusalem should be divided is utter nonsense, in part because there is only one nation in the history of the world that has claimed Jerusalem to be its capital, and that is Israel," Huckabee claimed.

This is false. Jerusalem was the capital of Mandatory Palestine, British-occupied Palestine in the early 20th century. The United Nations designated Jerusalem a "separate body" under its jurisdiction in 1947, although Israel militarily seized Western Jerusalem in 1948, before subsequently seizing East Jerusalem in 1967. Today, according to international law, East Jerusalem is Palestinian territory that remains illegally occupied by Israel.

Ignoring international law, Huckabee insisted Jerusalem is Israel's capital because it is not mentioned in the Quran. He therefore concluded that it is supposedly not important to Muslims.

In reality, Jerusalem, known as al-Quds in Arabic, is home to al-Aqsa, the third-holiest mosque in Islam, which is mentioned in the Quran. Moreover, Jerusalem is named in Islam's Hadith.

Huckabee declared that Jerusalem has been the capital of Israel "for 3,000 years," even though Israel did not exist until 1948.

In the conclusion of his speech, he stressed the ties between Christianity and Judaism, and pointed out he was wearing a pin on his lapel that is a "nano-Bible," the entire Old Testament written on a tiny piece of metal, the text of which can only be read with an electron microscope.

"We have to recognize that, if it’s good for Israel, it’s really ultimately good for the United States," and vice-versa, Huckabee said.

“Israel is the first domino, but we’re the next one. Anyone who attacks you is coming after us.”

Huckabee's speech can be watched below: