Left-wing lawmaker shot dead by nationalist shouting "Britain first!", as far-right is on rise in Europe 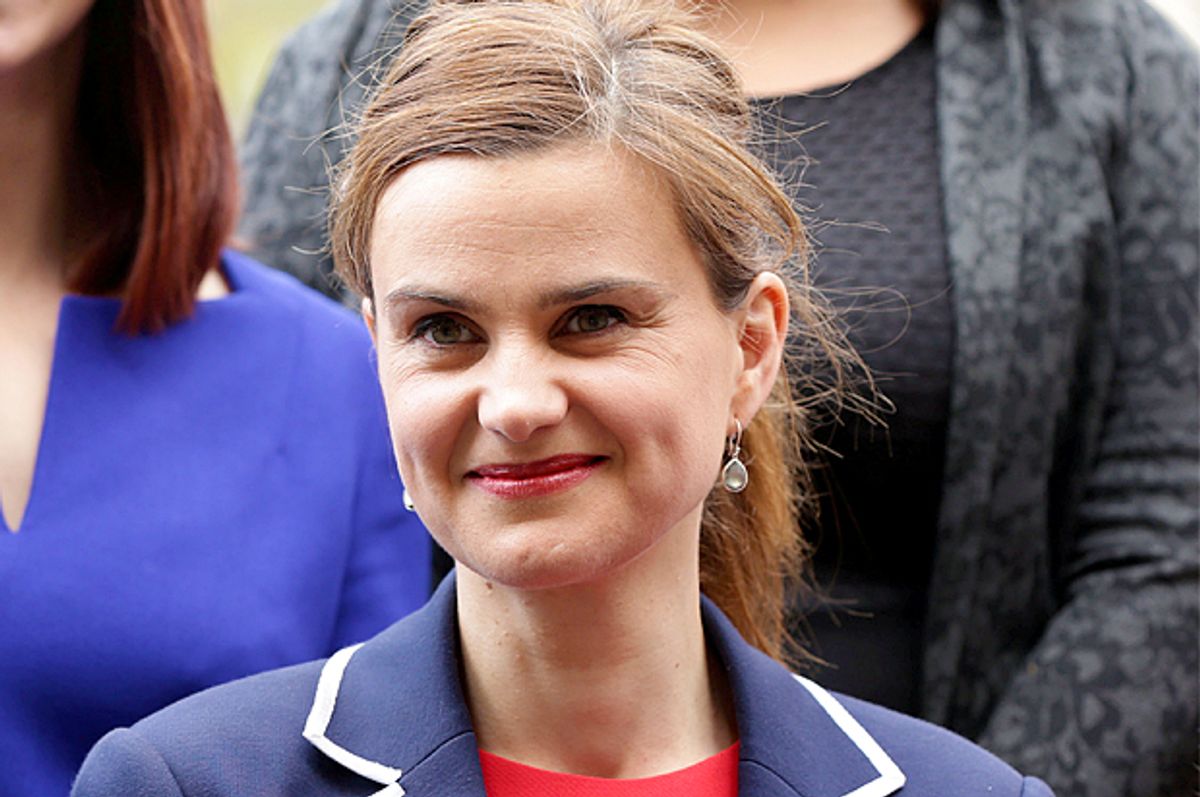 A left-wing lawmaker was fatally shot and stabbed by a British nationalist on Thursday, reports say, as tensions flare mere days before the U.K. votes on whether or not to leave the European Union.

This attack comes at a time when the far-right is on the rise throughout Europe, fueling extremist violence.

Labour Party MP Jo Cox, who opposes an exit from the E.U., was slain outside of a library in Birstall, West Yorkshire on Thursday afternoon. Eyewitnesses, according to reports, say she was shot three times and stabbed several times.

Multiple witnesses say the alleged killer repeatedly shouted "Britain first!" as he attacked her. This could potentially be a reference to Britain First, a far-right, anti-immigrant party that supports Brexit, a British exit from the E.U.

Britain First, however, strongly denies any involvement, and issued a statement saying it "could have been a slogan rather than a reference to our party." The far-right party's leader, Paul Golding, condemned the attack and said the shooter could have actually shouted, "It's time to put Britain first!"

Four hours after the attack, Cox was declared dead.

The U.K. will vote on Brexit on June 23. Polls show that Britons will likely vote to remain in the E.U.

The Labour Party, led by insurgent, longtime socialist activist Jeremy Corbyn — who has been described as the British Bernie Sanders — opposes Brexit.

Far-right political parties such as Britain First and the U.K. Independence Party, or UKIP, hope to leave in order to cut down on immigration and push back against refugees. They see the E.U. as a bureaucracy that curtails the sovereignty of their country.

Britain First insists it is not a racist party, instead identifying itself as "loyalist." Its founder, Jim Dowson, left the party 2014, however, warning that it was full of “racists and extremists.”

The extreme anti-Muslim party has "Christian patrols" that stage "invasions" of British mosques. It has applauded Republican presidential candidate Donald Trump for proposing a ban on Muslims from entering the U.S.

When the Labour Party's Sadiq Khan, a Muslim of Pakistani descent who was born in the U.K., was elected mayor of London, Britain First's leader Paul Golding expressed extreme disapproval, turning his back to TV cameras as Khan gave his victory speech.

The nationalist attack on the left-wing lawmaker is by no means the only incident of its kind in Europe.

In October, a neo-Nazi attacked a leading candidate in the mayoral race in Cologne, Germany. Henriette Reker, who supports admitting refugees, was stabbed in the neck by a right-wing extremist who opposed accepting Muslim asylum-seekers. Reker survived, and won the election.

As Salon has reported before, a persistent economic crisis and unpopular austerity measures that gut social spending, in conjunction with the mass influx of refugees, have given rise to ultra-nationalist and even neo-fascist movements in Europe.

This increasing right-wing extremism has fueled violence, which is often linked to anti-refugee sentiment.

In Germany, more than 1,100 attacks on refugee shelters and asylum-seekers were registered with the government in the first five months of 2016.

In May, police in Austria arrested a suspected neo-Nazi who allegedly threatened to massacre refugees seeking asylum in the country.

Nearly 1 million refugees and migrants passed through Austria on their way toward Germany and Scandinavia in 2015. Germany accepted more than 1 million refugees, although it is now deporting some to Turkey in a deal that the U.N. and human rights experts say is likely illegal.

Most refugees are fleeing Western-backed wars in Syria, Iraq, Afghanistan, Libya and more.

This influx of refugees has increased support for far-right parties like Britain First and UKIP. It has also fueled the anti-Muslim Pegida movement, which was founded by a man who dresses up like Hitler for fun, and which now has branches throughout Europe.

German Interior Minister Thomas de Maizière warned in May that there has been a “brutalization” of society.