At Israel's Herzliya Conference, Huckabee insisted Republicans aren’t waging a war on women but Muslims are 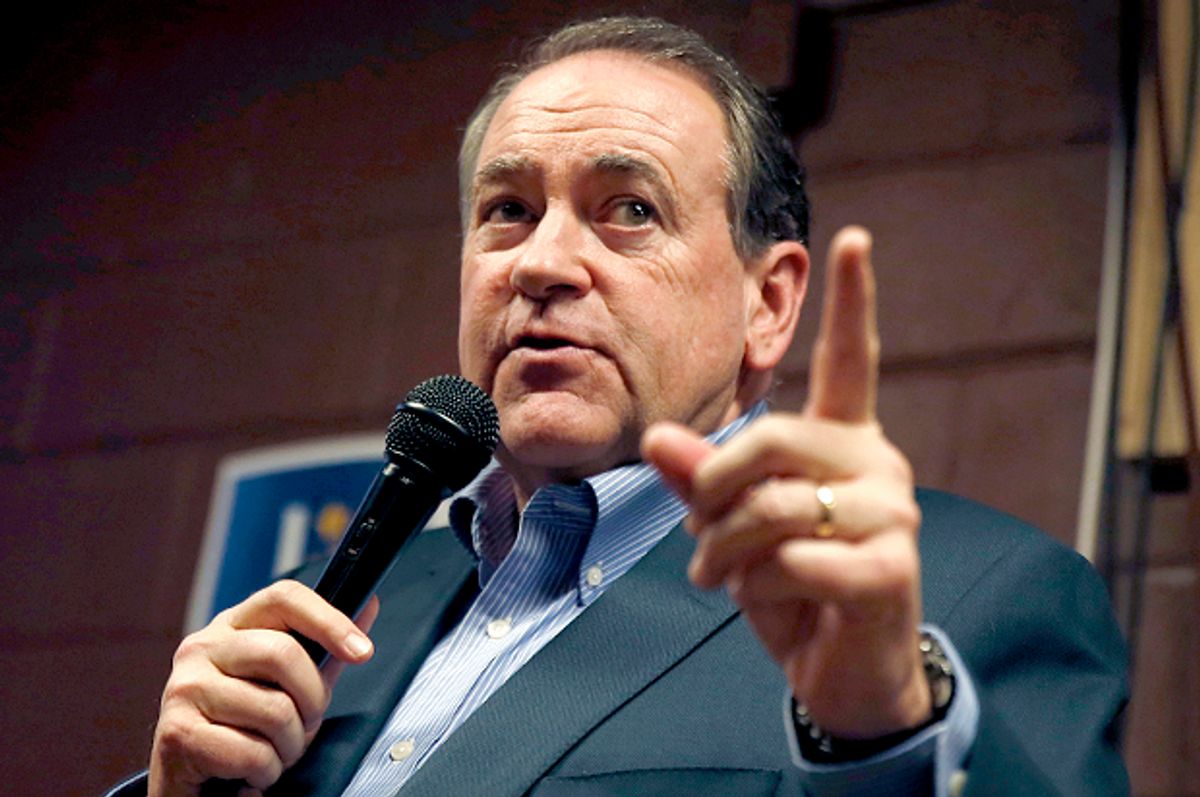 "Radical Islam is a threat to all civilization," Mike Huckabee declared at a prominent conference in Israel on Wednesday.

"The fact is we have a common enemy," he told Israeli leaders. "That common enemy is radical Islam, that wishes to destroy civilization itself and turn the clock back to centuries ago."

Huckabee, the former governor of Arkansas, is known for his extreme right-wing Christian views. He ran as a Republican presidential candidate in the 2008 and 2016 elections.

In his speech (video below) at the Herzliya Conference, which describes itself as "Israel's primary global policy annual gathering," Huckabee also insisted that it is not Republicans who are waging a war on women; rather, Muslims are.

"In America one of the big topics is, 'Is there a war on women?' Well I can tell you there is a war on women, but it's not being waged by Republicans," he asserted.

"The ultimate war on women is being waged by radical Islam, who would seek to subjugate women, not to allow them to have an education, to subject them to female [genital] mutilation, to restrict even so much as their attire and to make them forgo any level of individuality and be under the absolute control of a father or a husband," he continued.

While, in his opposition to "radical Islam," Huckabee may express concern about women's rights, he is notorious for his extreme right-wing policies and frequent sexist comments.

Huckabee maintained that a 10-year-old Paraguayan girl who was impregnated after being raped by her stepfather should have been denied access to abortion.

Justifying his opposition to abortion even in cases of sexual assault, he has said that "forcible rapes" have created “extraordinary” people.

In his speech at the Herzliya Conference, Huckabee expressed "extraordinary love" for Israel, where he insisted "I have seen biblical prophecy fulfilled." Salon covered these remarks in another article.

He was introduced as "a great friend of Israel" and "a devout Christian." Huckabee espoused extreme Christian Zionist views, and stressed the ties between Christianity and Judaism, while demonizing Islam.

His speech was full of religious references, and he noted that he was wearing a pin on his lapel that is a "nano-Bible," the entire Old Testament written on a tiny piece of metal, the text of which can only be read with an electron microscope.

"I will speak very candidly and frankly today," Huckabee said. "There is a foe that we commonly face."

"The greatest threat to civilization today is the radical Muslim ideology that would take us back to the seventh century and to kill anybody who disagrees with that," he added.

"It's a regressive worldview, and it's a worldview that actually believes we should not have education and revelation, nor should we have individual freedoms and liberties."

Huckabee continued: "I fear that sometimes we are afraid to call out the common enemy of radical Islam because we're afraid it might offend somebody. Let me be clear: I'm offended when innocent people are murdered."

He did not mention innocent people killed in U.S. wars, or the thousands of innocent Palestinians killed by Israel.

Huckabee did mention the massacre of at least 49 Americans at a gay nightclub in Orlando, Florida on Sunday, June 12, yet he did not mention the fact that the vast majority of the people killed were LGBT Latinos.

"The argument over whether or not it is terror or a hate crime is really nonsensical," he said. Huckabee did not mention it was a massacre at a gay club and that the shooter himself, who frequented the bar, was likely gay. Nor did he mention that the shooter said the attack was revenge for the U.S. war in Afghanistan, which Huckabee supports. Instead, he portrayed the Orlando massacre merely as a product of Islamic extremism.

Although Huckabee is a staunch opponent of LGBT rights in the U.S., and has used the term "the ick factor" to refer to same-sex relationships, he used oppression of LGBT people in the Middle East to advance the anti-Muslim talking points in his speech.

Huckabee condemned “Muslim countries who believe that all people who are gay should be put to death,” and declared, “That level of inconsistency needs to be called out and not tolerated.”

His speech can be watched below: