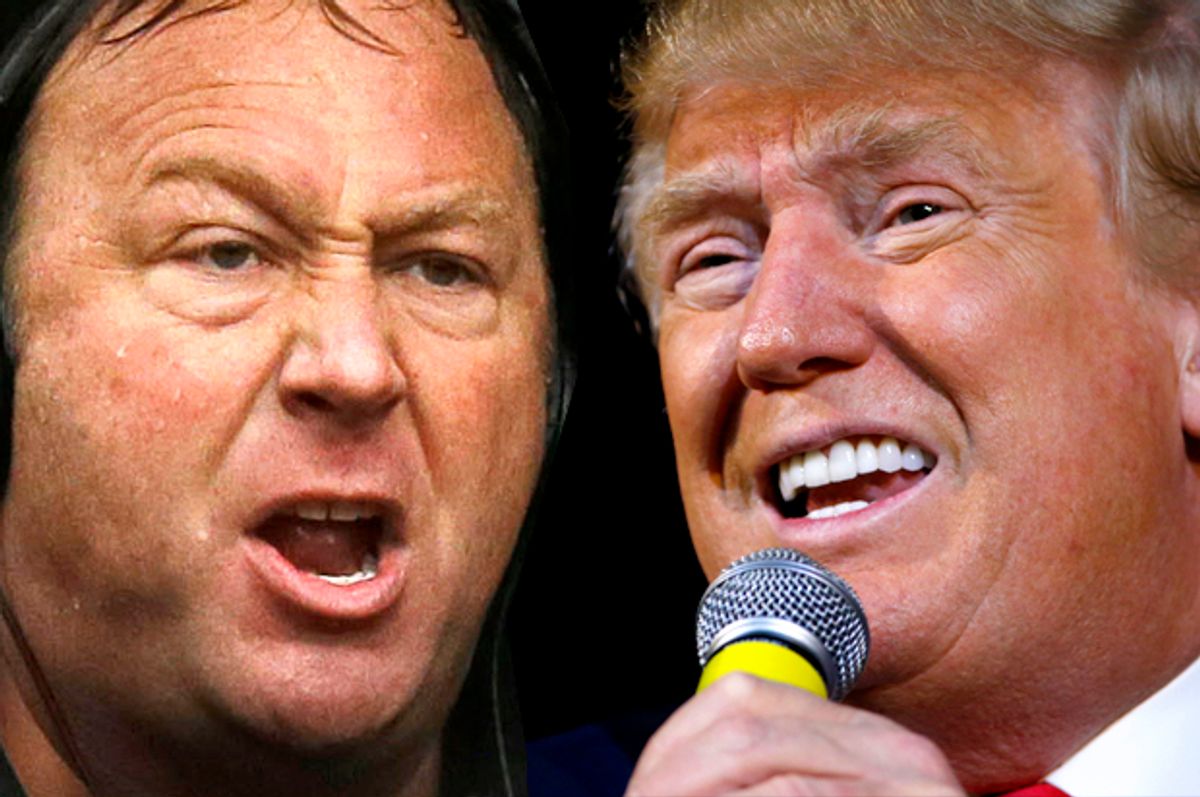 Before we dig in, take a spare second and review this new video clip from conspiracy peddler Alex Jones. When you return from watching, let's talk.

It might or might not surprise you to learn that Alex Jones, the screechy egg-shaped weirdo in the video, is, perhaps, the most popular media spokesman for Donald Trump. The presumptive Republican presidential nominee has appeared on Jones' show on numerous occasions to discuss everything from the latest poll numbers to a lengthy menu of conspiracy theories, most of which involve President Obama's background or his nefarious goals -- none of which have actually occurred in nearly eight years, but there's still time, I suppose. It's a perfect match given how Trump has, for years, helped to mainstream the falsehood that Obama wasn't born in Hawaii (he was), and, in pursuit of that effort, Trump even spent his own money to send investigators to Honolulu to snoop around for proof.

The fact that Trump markets in ridiculous and thoroughly debunked conspiracy theories should be enough to disqualify him from the presidency, along with countless other reasons beginning with the fact that he's nothing more than an unqualified, clown-haired bigot who's gullible enough to believe in some of the nonsense that Alex Jones sells to his mentally ill listeners. Someone should ask Trump if he believes the following Jones theories: 1) that the government is manufacturing more gay people by spiking juice boxes with chemicals that block testosterone; 2) that Obama used planes and small helicopters to move a super-tornado toward an Oklahoma town, destroying it; and 3) that there are shapeshifting lizard people from outer space living among us and manipulating our politics and economy.

Exactly none of these conspiracy theories are less believable than the one Trump tweeted on Wednesday. This latest theory to be blurted by Trump didn't come from Jones this time, but it, not unlike Trump's connection to Jones' theories, confirms that Trump might be the dumbest, most irrational, most unstable candidate to ascend to the GOP nomination.

An: Media fell all over themselves criticizing what DonaldTrump "may have insinuated about @POTUS." But he's right: https://t.co/bIIdYtvZYw

Let's dispense of the details before we get into the obvious reason why Trump latched his orange wagon to Breitbart's poisonous star.

Trump favorably linked to a Breitbart.com article, which means I shouldn't have to continue writing. The linkage to Breitbart is enough to undermine the veracity of the theory that, according to the reputed far-right propaganda front, Obama secretly ordered American military support to the Islamic State, and that Hillary Clinton received a memo confirming it. The allegedly "secret" memo was published via the conservative backstop organization Judicial Watch, which, by the way, is suing Hillary Clinton, making it a super-reliable source for objective information.

Predictably, the allegation about a connection between the White House and ISIS was debunked more than a year ago. Because of course it was. It has to have been for Trump to have tweeted it because this is what Trump does. Nevertheless, the theory goes like this:

However, there's nothing in the memo proving the White House supported al-Qaeda in Iraq (AQI), which eventually became ISIS. Indeed, in 2012 when the memo was authored, ISIS didn't exist. Furthermore, according to Middle East expert and former Salon.com writer Juan Cole, the memo "doesn’t say that the US created sectarian groups and it does not say that the US favors al-Qaeda in Syria or the so-called 'Islamic State of Iraq.'" Briefly put, when Trump tweeted that he's "right" about Obama, the answer via Cole is a resounding "no." He's not. And experts like Cole knew it more than a year before Trump chose to tweet the link.

Furthermore, the so-called "secret memo," as Brietbart claimed in its headline, was something else entirely.

The “secret memo” Breitbart referred to is an intelligence information report.

Michael Pregent, a former US Army intelligence officer who served as an embedded military adviser in Iraq, explained what this is. “I wrote [intelligence information reports] as an intelligence officer in Iraq - they were based on interviews with sources,” Pregent, who is now an adjunct fellow at the Hudson Institute, told Business Insider in an email. “This IIR is based on an interview with a source. This is not someone putting their career on the line.”

Again, Cole and many others debunked the claims about the memo more than a year ago, and yet Trump continues to publicize the falsehood. Shocker, I know. But when you're making a specious case that Obama is responsible for the Orlando massacre because, as Trump insists without any proof whatsoever, Obama is secretly supporting ISIS, it's a really, really convenient item to magically appear on a pro-Trump tabloid site, Breitbart, just after Trump again connected ISIS and Obama, even though it's been some 13 months after it first broke and after it was totally disproved.

Indeed, for some time now, Trump and other characters like Rand Paul have been spreading theories about Obama's alleged support for ISIS. Not too long ago, Paul, for his part, happily repeated the false claim that the late Ambassador Chris Stevens, who was killed during the Benghazi attacks, was running Libyan weapons to Syrian rebels with links to al-Qaeda upon the orders of Obama and Clinton. Conceptually speaking, Trump has been pursuing his Birther theories, with its centerpiece that Obama is a secret Muslim, since at least 2011. His goal now is obviously to use anything related to terrorism in order to prove the Birther gibberish, thus linking all Islamic terrorism to Obama's nonexistent familial sympathies.

Trump's growing roster of political blunders all seem to be multiplying like a virus and awkwardly emerging from his strategy to exploit the paranoia and inchoate fear that's baked into the brains of his "poorly educated" supporters, each of whom are obviously willing to believe anything Trump says, no matter how absurd. One of the top-shelf fears held and paraded around by his supporters is the fear of outsiders, which is precisely why Trump is making a big deal about Obama's birthplace, along with Judge Curiel's Mexican roots (even though he's from Indiana), not to mention Omar Mateen's Afghanistan roots even though the Orlando shooter was born in New York. None of these finer points are important to Trump or his poorly-educated, brainwashed automatons in pursuit of building his idiotically conceived "big beautiful wall" and his ban on Muslim immigrants. It always helps that Trump's disciples are dumb enough to accept farcical tall-tales originating with Alex Jones, Breitbart and Matt Drudge.