The 2016 SBC featured a resolution against racism, yet the church doubles down on anti-gay bigotry despite Orlando 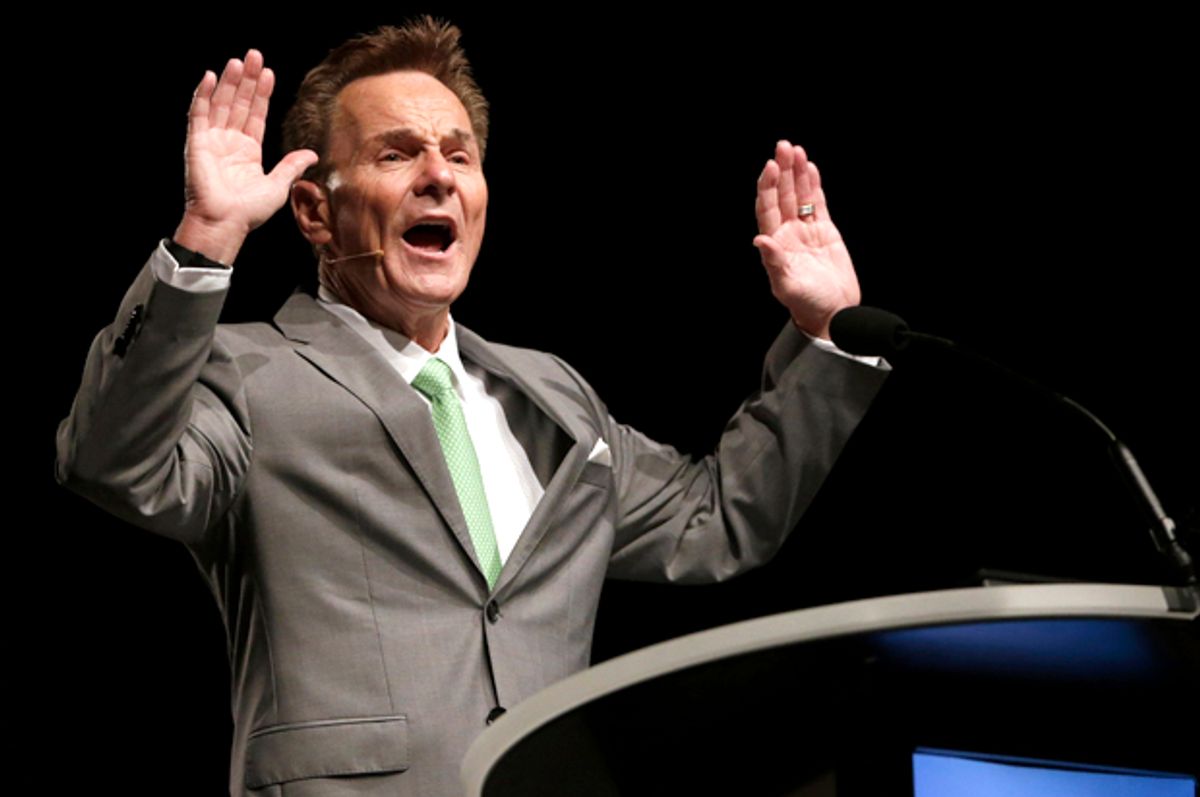 Ronnie Floyd, president of the Southern Baptist Convention, speaks to members of the organization, June 14, 2016, in St. Louis. (AP/Jeff Roberson)
--

The annual Southern Baptist Convention, a meeting of thousands of church members belonging to the second largest denomination in the country (after Catholicism), is always a fascinating snapshot of what kind of political pressures are weighing on the Christian right these days. This year's meeting in St. Louis was especially dramatic, demonstrating cracks in the stalwart conservatism that has defined the church for decades.

While the denomination is a robust and diverse one, with many of the member churches leaning liberal, by and large, Southern Baptists are the backbone denomination of the religious right as we know it, which is reflected both in the leadership (two-term president Ronnie Floyd, for instance, claims that we are experiencing "a sexual epidemic of unprecedented proportions in this country") and in their official political declarations, such as when they SBC infamously declared, in 1998, that wives are expected to submit to their husbands.

But that bastion of Christian conservatism did something surprising this time around, putting out a resolution ever-so-gently asking believers to stop flying the Confederate flag, on the grounds that the flag "is used by some and perceived by many as a symbol of hatred, bigotry, and racism, offending millions of people". The resolution also cites the massacre of nine people at the Emanuel African Methodist Episcopal Church in Charleston last year, dead at the hands of a white supremacist.

The resolution was proposed by William Dwight McKissic Sr., a black pastor out of Arlington. He met with an immediate backlash from white Baptists using the same tedious "heritage" arguments that flag defenders always use, as if treason in defense of slavery is a heritage anyone should be proud of.

Under the circumstances, he and president Ronnie Floyd were skeptical that the resolution would go anywhere, but voters rallied around the resolution. They even, in a surprising moment, demanded language changes to make the resolution even more anti-racist.

It appears that the initial draft of the resolution went to great pains to placate those making "heritage" arguments, with the statement, "We recognize that the Confederate battle flag serves for some not as a symbol of hatred, bigotry, and racism, but as a memorial to their loved ones who died in the Civil War, and an emblem to honor their loved ones' valor".

But voters actually removed that language from the final draft. While the final draft still notes "the importance of remembering family heritage and sacrifice", the final and strongly stated conclusion is that Baptists should refrain from flying the flag to show solidarity  with "our African-American brothers and sisters."

It's a small victory, but a significant one. After all, it was the deep-seated commitment to racism on the part of many prominent Southern Baptist leaders, most notably Jerry Falwell, in the 20th century that turned the church into the anchor for the religious right that it remains to this day. White church-goers, especially Southern Baptists, turned to religious authority to fight efforts at desegregation, and in the process, created the organizational infrastructure that undergirds the Christian right.

The Christian right long turned away from its origins as a pro-segregation movement, but still, with a history like that, it's amazing that the SBC, still dominated by white conservatives, would make such a strong statement of anti-racism. It's a small step, but a profound one, choosing the well-being of African-Americans over protecting the egos of defensive white conservatives.

But while the massacre in Charleston caused the SBC to move more boldly against its history of racism, the reaction to the Orlando shooting, in which 49 people were killed by a gunman who attacked a gay club, has not caused the SBC to reconsider hateful attitudes towards LGBT people.

Sure, the first resolution of the convention was one addressing the shooting, but it's full of mealy-mouthed language condemning murder, without addressing the bigotry that appears to have inspired this murder.

Which is no wonder, because the convention swiftly moved  to stoke anti-LGBT bigotry, with its third resolution, titled, "ON BIBLICAL SEXUALITY AND THE FREEDOM OF CONSCIENCE."

The resolution paints homophobic bigots as victims of their supposed LGBT oppressors. After defining legalized same-sex marriage and anti-discrimination ordinances as law that contradict "natural law and biblical truth," the SBC declares that "Our highest respect for the rule of law requires that we not affirm an unjust law that directly contradicts higher law."

Which is to say, they are trying to argue that they are totally for rule of law, unless, of course, they don't like that law, in which case they should be free to violate it without any fear of consequences. The resolution goes on to call for "religious freedom" laws, which are basically laws that shield people who violate the rights of LGBT Americans, such as those who would deny marriage licenses, jobs or housing to people just because they're gay.

This kind of resolution is gross bigotry at any time, but it's especially disturbing and dehumanizing at a time like this. Many of the people murdered in Orlando aren't even dead yet, and here is the SBC, coming out in support of those who would humiliate, harass, and discriminate against LGBT people.

Under the circumstances, it would have been best if they hadn't issued the first resolution at all. Now it seems like the SBC is demanding a cookie because, while they support humiliating and discriminating against LGBT people, they formally oppose shooting them in the head.

Sorry, but no sale. If the SBC really believes, as they say in their condemnation of murdering LGBT people, that God "calls His people to love their neighbors as themselves", then it's not enough to simply refrain from murdering them. You have to treat them with love. You do not love a person by painting them as deviant and supporting a system where they can be legally humiliated and denied rights, so long as the bigoted bully in question, like Kim Davis, declares they are bully for Jesus.

While it's good to see the SBC come out against the Confederate flag, albeit decades too late, their unwillingness to let go of anti-gay bigotry shows they have a long, long way to go before they actually become the loving, generous church they fashion themselves to be.