The UN's damning report on Israel and torture: The desperate case of Palestinian youth in the occupied territory 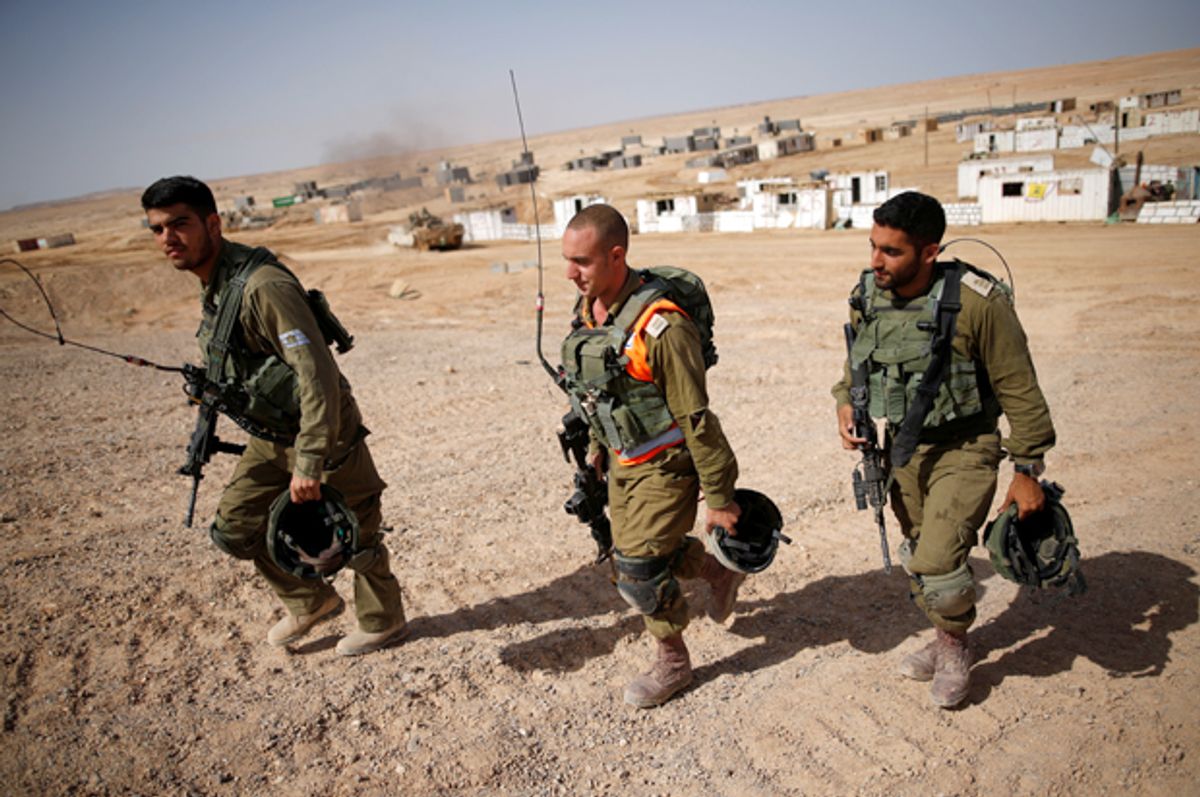 Just recently, Israel was elected to chair one of the United Nations’ permanent committees — the Sixth Committee, called the “Legal Committee.”  It oversees issues related to international law, including human rights issues and issues of decolonization.  Israel’s ambassador to the UN, Danny Danon remarked, "I am proud to be the first Israeli elected to this position… Israel is a world leader in international law and in fighting terrorism…We are pleased to have the opportunity to share our knowledge with the countries of the world.”  This presents a case of overwhelming contradiction, as Israel itself has been sharply and persistently criticized for violations of human rights and its continued colonial project in the Occupied Palestinian Territory.

In May 2011, Danon wrote an op-ed published in The New York Times where he advocated that Israel annex all West Bank settlements and “uninhabited areas.”  He concluded that under his plan Israel would bear no responsibility to Palestinians in the West Bank, who would live in their own "unannexed" towns.  Furthermore, under his plan Palestinians would not be eligible for citizenship.  According to him, this solution would avert the "threat to the Jewish and democratic status of Israel by a growing Palestinian population."  Danon’s definition of democracy is specifically narrow, and now that the two-state solution is thoroughly dead, this mentality indicates what democracy Israel-style might look like in the one state.

A recent report by the United Nations Committee Against Torture puts into stark relief the absurd situation we are now in, with Israel chairing a committee that is responsible for, among other things, calling attention to Israel’s violations of human rights and its programmatic colonization of the OPT.  The UNCAT meets in Geneva three times a year and examines States’ implementation of and compliance with the Convention on the basis of reports received from the State party as well as from other, independent sources including reports from non-governmental organizations.  Just last month it issued its “Concluding Observations [advance unedited version]” of May 13, 2016.

The report begins by commending Israel for two legislative and judicial measures, and for six initiatives to adopt policies and administrative measures “to give effect to the Convention [Against Torture].”  Listed among the positive aspects is Israel’s “adoption of Amendment No. 14 to the Youth (Trial, Punishment and Modes of Treatment) Law 5731-1971, in July 2009, which inter alia gives precedence to rehabilitation over punishment of children accused and/or convicted.”

It then enumerates 25 concerns, including allegations of torture and ill-treatment, excessive use of force, coerced evidence, settler violence, house demolitions, and the issue of asylum seekers and refugees.  It also “regrets the State party’s continued argument that the Convention does not apply in all the Occupied Territories and notes that this position is contrary to the views of this Committee as set forth in its previous concluding observations (CAT/C/ISR/CO/4, para. 11), other treaty bodies, and the International Court of Justice.”  It then “reaffirms that the Convention applies to all territory and persons under the jurisdiction of the State party, including the Occupied Territories.”

What emerges is a deeply troubling picture of the situation of Palestinian youths and children living in the occupied territories.  Despite Israel’s adoption of the amendment on youth mention above, it would appear that those protections would not apply to Palestinians living in the occupied territories.  We have only to think of the attacks on Gaza and the arrests and killing of Palestinian youths on the West Bank to see a dangerous form of immunity protecting Israel from being held responsible.  We therefore have a formula for the perpetuation of violence and death, as more and more children and young people, already living at the heart of despair, are being pushed to react and then met with even greater violence and abuse.

The treatment of juvenile detainees is one of the concerns specifically mentioned in the UNCAT report, which draws attention to the fact that despite the laws Israel itself has passed that would seem to afford protection to youth under arrest, these laws often go unenforced when it comes to Palestinian minors.  Here is the relevant passage:

While taking note of the provisions of the Youth Law (Trial Punishment and Modes of Treatment) 5731-1971 relating to the arrest and detention of minors and of positive developments in the Juvenile Military Justice System applicable in the West Bank, including the establishment of a Juvenile Military Court in 2009, the increase of the age of majority from 16 to 18 years for the purposes of adjudication in 2011, and other measures providing for safeguards and guarantees for minors, the Committee is concerned at reports that such legal developments are not always implemented in practice, in particular with respect to Palestinian minors accused of security-related offences. In this respect, it is concerned at allegations of many instances in which Palestinian minors were exposed to torture or ill-treatment, including to obtain confessions; were given confessions to sign in Hebrew, a language they do not understand; and were interrogated in the absence of a lawyer or a family member. The Committee is also concerned that many of these children, like many other Palestinians, are deprived of liberty in facilities located in Israel thus hindering access to visits of relatives who live in the OPT.

In March, Defence for Children International Palestine (DCIP) and the World Organization Against Torture (OMCT) submitted a joint alternative report to the UN Committee, focusing on the ill-treatment and torture of Palestinian children in Israeli military detention and the use of excessive force by Israeli forces.  Its most important findings corroborate and give further detail to the UNCAT report, noting the following:

Children represent 46.2 percent of the 4.68 million Palestinians living in the occupied West Bank, including East Jerusalem, and the Gaza Strip, and instability and violence defines much of their lives. Since 2000, Israeli forces and extremists have killed more than 2,045 Palestinian children, including 551 in 2014 alone, the majority during Israeli military offensives on the Gaza Strip, according to documentation collected by Defense for Children International-Palestine.

Amnesty International has drawn attention to the “extrajudicial executions” carried out by the Israeli police and army—many of those children killed for those alleged assaults were deprived of their rights.

Each of these reports, by both the United Nations and by NGOs, brings a spotlight to human rights abuses in Israel; each of these reports expresses dissatisfaction with  the State’s response to concerns that have been repeated consistently for years.  A culture of despair has grown in this situation where Israel has created and maintained a culture of immunity and unaccountability.

The DCIP/OMCT report notes Israel’s ISA (Israel Security Agency) Law 5762-2002 exempts ISA employees from “criminal or civil responsibility for any act or omission performed in good faith and reasonably (...) within the scope and in performance of” their duty, de facto nullifying any prosecution of ISA interrogators accused of torture.

Despite Israel’s ratification of the Convention in 1991, this culture of impunity extends to soldiers who resort to ill-treatment throughout the country and the Occupied Palestinian Territories as well as the police whose use of violence is especially targeted against Palestinians, Ethiopians and asylum seekers. Yet this violence rarely results in any investigation or prosecution of the perpetrators or any reparation for the victims.

As Salon has pointed out, Palestinian children suffer disproportionately under Occupation already.  It is only natural that after lifetimes of oppression, one wishes to remove the cause of that oppression.  As UN Secretary General Ban Ki-Moon said in January, “"As oppressed peoples have demonstrated throughout the ages, it is human nature to react to occupation."  And when, as I have noted previously, Israel clamps down on even the non-violent means of protest that Palestinian youth engage in, we have a formula for disaster.  The naming of Israel as chair of the Sixth Committee simply completes the circle of repression and immunity Israel has profited from, to the detriment of the Palestinian people, and especially its children.