Republicans in denial: They still can't accept that years of festering racism made Trump 2016 possible 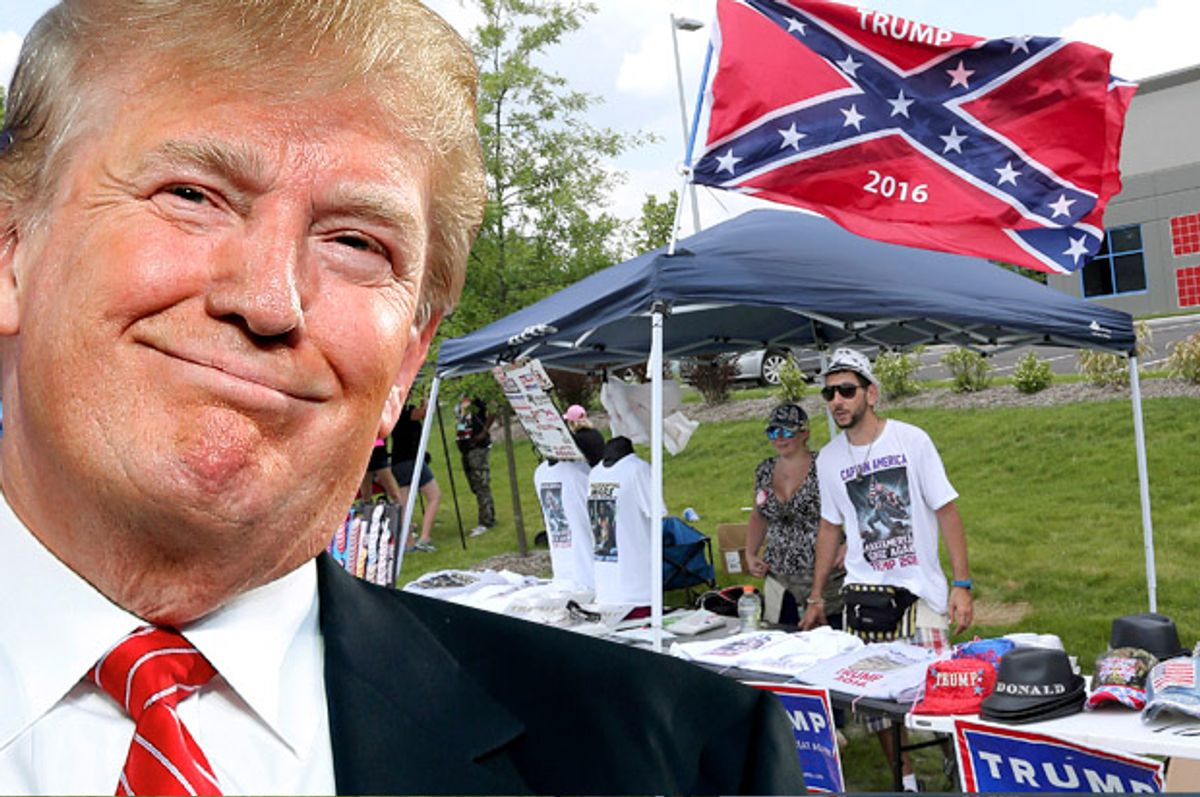 The “Never Trump” forces in the Republican Party have not completely surrendered yet. The last couple of days have brought fresh speculation that Republicans may still try to pull off some sort of coup at next month’s convention, dumping Donald Trump off the ticket and replacing him with whatever cannon fodder they can find who doesn’t mind destroying his political future in service of the short-term gain of ridding the party of its association with the real-estate mogul.

Because make no mistake, destruction of his future is exactly what that sacrificial lamb would be doing. Getting rid of Trump after an angry floor fight on national television would likely irreparably rupture the relationship between party leaders and the base that voted overwhelmingly for Trump in the primaries. Any replacement would be leading a hollowed-out party for a few short months while trying to mount a comeback from way, way, way behind Hillary Clinton. It is a testament to what a toxic dumpster fire the last few weeks of Trumpism have been – the racist crusade against the judge overseeing the Trump University lawsuit, the candidate’s reaction to the Orlando massacre last weekend – that Republicans are still muttering about trying to pull off this move.

To do this, Republicans opposed to Trump have to make associating with the candidate and his campaign as poisonous for members of the GOP elite as they possibly can.  To that end, one of the earliest visible members of the “Never Trump” movement on Wednesday unleashed a tweetstorm that earned him laudatory headlines and compliments from liberal websites and writers I normally greatly respect. If I thought this was an extended ratfucking exercise, I might have more patience for it. Because for whatever their merits as anti-Trump arguments, these tweets are not the work of a Republican who has come to grips with what his party has become.

As early as last summer, Rick Wilson was pushing the GOP to recognize the threat the orange-tinted infected boil represented to it. Even then, he was running into some immovable forces. Apathy from party bosses and fear of its intractable base were just two of them. But what Wilson and many others seemed to overlook was why the base was so intractable in the first place.

Wilson is a long-time Republican strategist and media consultant who has worked for some high-profile campaigns over the years. He is an acerbic and funny personality, which makes him a great guest for Chris Hayes’s show but not someone with a visible bent for introspection. He has spent months railing against members of his party who refused to stand up to Trump during the primaries, or even to take him on now, to rein him in and get him to run an actual presidential campaign before he – and by extension the rest of the GOP – gets shellacked by Clinton.

But Wilson himself has made a living for many years by playing to the same forces that allowed Trumpism to grab hold of the GOP. He has worked on dozens of campaigns, including the 2002 senatorial run of Saxby Chambliss, which earned the opprobrium of fellow Republicans for ads implying that his opponent, incumbent Democrat Max Cleland, for being weak and unpatriotic on defense issues despite the fact that Cleland was a veteran who had lost both legs and an arm fighting in the Vietnam War.

The kinds of scorched-earth tactics used against Cleland and dozens of other Democrats have been a feature of Republican politics for decades. They helped usher in the Republican Revolution under Newt Gingrich in 1994, when the future Speaker and Frank Luntz encouraged their colleagues to paint Democrats not just as ideological opponents, but as “twisted” and “disgusting” “traitors” determined to destroy America.

These tactics, combined with the rise of a conservative media that thrives on bringing out the worst racism and hatred of the right, along with the winking acquiescence of a GOP elite composed of politicians and consultants like Rick Wilson and the general know-nothingness encouraged by the party and embodied in the popularity on the right of politicians like Sarah Palin, have helped Republicans grab and hold legislative majorities in Congress and in the majority of the states. In the Obama era, the nihilism of these tactics resulted in a policy of maximum resistance to President Obama and congressional Democrats.

In the course of becoming the Party of No, Republican leaders made a promise to the base that President Obama’s agenda could be completely stopped and even reversed, despite the constitutional barriers. And when the GOP couldn’t actually deliver on this promise, it set the stage for a demagogue like Trump to rise and seize control.

In short, the GOP has been playing around with the zealotry and white supremacy of its base going back to Nixon’s embrace of the Southern Strategy 50 years ago. The party elites thought they could control the fire they lit, channeling it into keeping them in power while they pursued economic policies that benefited the upper classes. People like Wilson made a living tending and stoking that fire. He’s not upset that Trump has destroyed the noble mantle of the Republican Party. He’s mad because the con he has helped run for decades has now been exposed, and he doesn’t want to face up to his part in it.

I’ll give him credit for coining the term “Cheeto Jesus” though. That is pretty funny.