Suspected killer of British lawmaker is neo-Nazi — but media blamed mental illness, like Charleston 1 year ago 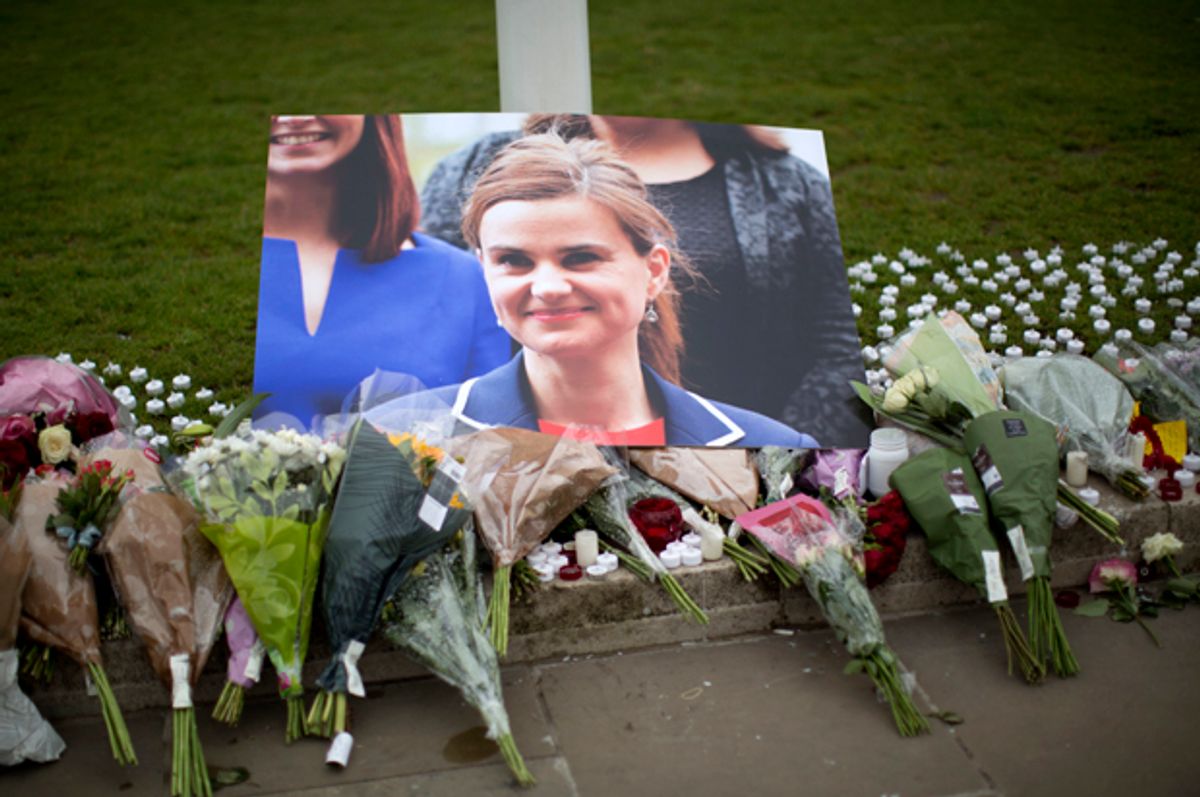 The man suspected of brutally killing a left-wing British lawmaker on Thursday was a longtime supporter of a neo-Nazi group, a hate group watchdog says, although media reports have misleadingly portrayed the white shooter as a "crazed loner."

Labour Party MP Jo Cox was attacked outside of a library in Birstall, West Yorkshire on Thursday. She was shot three times and stabbed several times.

This phrase could be a reference to Britain First, a far-right, anti-immigrant party. The party, however, strongly denies any involvement and says the shooter could have been shouting “It’s time to put Britain first!”

The vicious attack came mere days before the U.K. votes on whether or not to leave the European Union.

Cox was known for her outspoken support for refugees. She also strongly opposed Brexit, a British exit from the E.U.

Far-right parties like Britain First and the U.K. Independence Party want to leave the E.U., which they hope will allow them to cut down on immigration.

Authorities arrested 52-year-old Thomas Mair as the suspected shooter. British media outlets described Mair simply as a "loner" with a "history of mental illness," implying that his alleged attack was not politically motivated.

The leading monitor of hate groups, on the other hand, says Mair was not a mere loner. Rather, he had "a long history with white nationalism" and "was a dedicated supporter" of a neo-Nazi group, the Southern Poverty Law Center reported.

The watchdog group obtained records that show that, for decades, Mair supported the National Alliance, "the once premier neo-Nazi organization in the United States."

Mair sent more than $620 to the neo-Nazi group, buying periodicals and manuals with instructions on how to build guns and make explosives. Among the items on Mair's receipts was "Ich Kämpfe," an illustrated handbook issued in 1942 to members of the Nazi Party.

The National Alliance's founder, William Pierce, was most well-known for writing white supremacist novels, including "The Turner Diaries," which the Southern Poverty Law Center noted may have been an inspiration for Timothy McVeigh, the right-wing extremist who bombed an Oklahoma City federal government building in 1995, killing 168 people and injuring at least 600 more.

Police also found "Nazi regalia and far-right literature" at the home of the suspected shooter Thomas Mair, The Guardian reported.

"Sources say that the suspected killer was lucid when first questioned," The Guardian added, further suggesting earlier claims that the attack was a product of mental illness are misleading.

"A picture is now emerging of a deliberately targeted attack in which Mair lay in wait for the MP as she emerged from her constituency meeting on Thursday," the prominent British newspaper wrote.

Media reports also revealed that Mair was a longtime subscriber to S. A. Patriot, a pro-apartheid South African magazine. The racist publication, which says it opposes “multi-cultural societies” and "expansionist Islam,"described Mair in 2006 as “one of the earliest subscribers and supporters of S. A. Patriot.”

Media outlets have long been criticized for blaming attacks carried out by non-Muslim white people on mental illness. In reality, scientific research shows that mentally ill people are more likely to be the victims of violence than they are the perpetrators.

This same misleading media response, in fact, was exemplified one year before the killing of MP Cox.

On June 17, 2015, white supremacist Dylann Roof massacred nine black Americans at a church in Charleston, South Carolina. Media outlets immediately blamed the attack on mental illness. They insisted that Roof was a "white loner" who "has a history of severe mental health issues that have either gone untreated or undiagnosed."

News outlets also reported that Roof was a "really sweet," "quiet," "normal" kid with only "a few friends" — including even some black ones. Yet he “was raised in a home destroyed by domestic violence” and was a product of “internet evil,” they claimed.

When anti-fascist activists dug deeper, they discovered Roof's website, which contained his white supremacist manifesto, along with 60 photos of the Charleston killer posing with neo-Nazi and white supremacist symbols.

In his manifesto, Roof made it clear that his attack was politically motivated; by slaughtering black civilians, he hoped to instigate a race war.

Mainstream journalists actively depoliticized the killing. The editorial board of the Wall Street Journal went so far as to claim that racism is dead and that Roof’s shooting was “a problem that defies explanation beyond the reality that evil still stalks humanity.”

Meanwhile, avowed communists did real reporting. "As a communist, it is my duty and obligation to spend at least $49 to help ruin this guy’s insanity plea," said one of the sleuths after unearthing Roof's neo-Nazi website.

One year later, media outlets continue to depoliticize these murderous attacks by right-wing extremists, which are on the rise throughout the West. It appears few lessons have been learned.