Throughout his presidency, Obama has been better at comedy than the pros—who would normally be taking him down 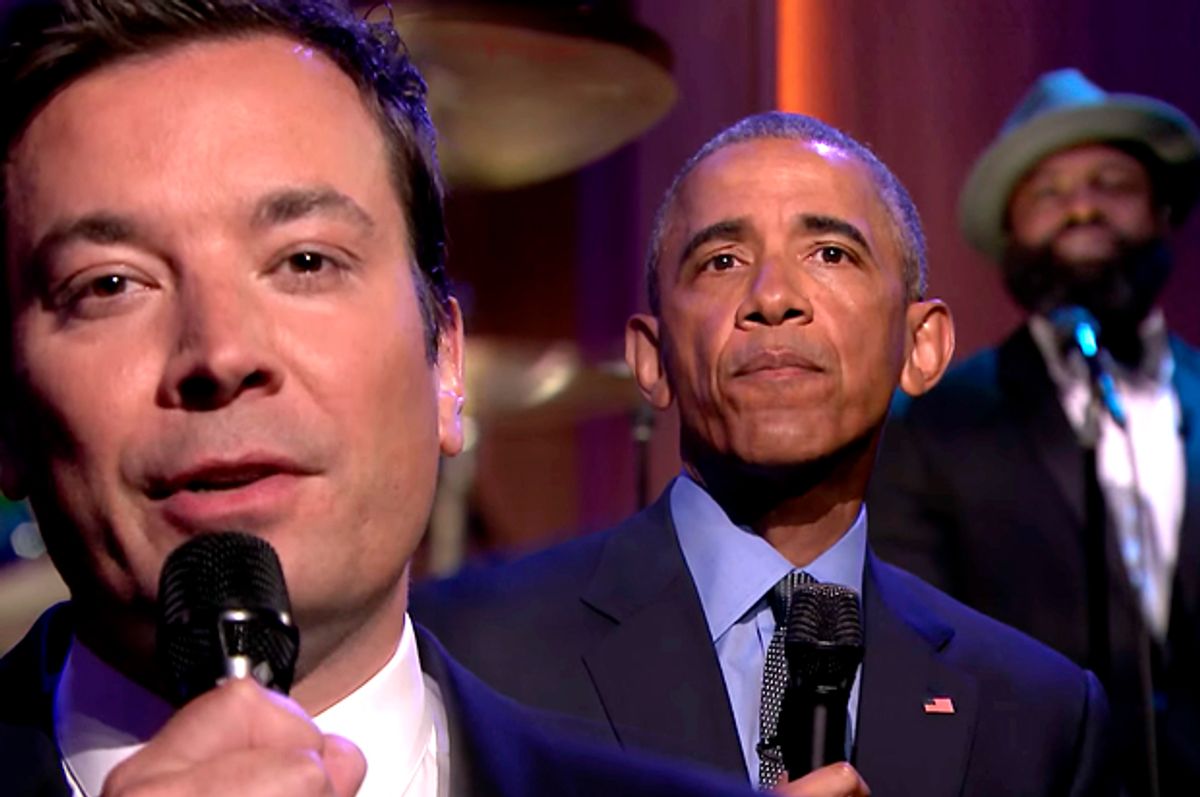 Now that President Obama’s departure from the White House is in sight, it is time for an appreciation of one under-reported aspect of his character that I suspect we will all miss no matter who is president this time next year. (It’s going to be Hillary Clinton.)

I don’t mean he’s funny in that he is a ridiculous or easily caricatured figure. He may be the first president of my lifetime who comedians have never been able to draw a bead on the way they could with every other Oval Office occupant of the last 50 years. Phil Hartman’s renditions of Ronald Reagan and Bill Clinton are still hilarious a good 30 and 25 years later, respectively. Dana Carvey’s take on George H.W. Bush still feels dead-on. Even Will Ferrell’s lazy interpretation of George W. Bush works because the president himself came off as being lazy and disinterested for his entire eight years in office.

No, Obama is a genuinely funny performer who has gotten better over the course of his presidency. Watch some of his speeches at the annual White House Correspondents Dinner and compare, say, 2009 to 2016. Or watch this great spoof in which he plays Daniel Day-Lewis playing Barack Obama. He’s got excellent timing and a relaxed bearing. He makes the smart choice to play the absurd premise straight up. As far as Steven Spielberg comedies go, it’s a hell of a lot funnier than “1941.”

Like many performers, it helps to hand Obama a decent script. But he’s good even when you don’t. The jokes in his WHCD speeches are often hacky and obvious, but he still sells them. The infamous Buzzfeed selfie-stick video from early in 2015 doesn’t have much of a script, but the president somehow finds some humor in it.

Or stick him with an inferior co-star like John Boehner or Jimmy Fallon. Yes, Jimmy Fallon is actually less funny and entertaining than the president when the latter has appeared on “The Tonight Show” to slow-jam the news. Maybe NBC should give Obama the show after his term ends. He might need something to do, at least until he and Michelle move back to Chicago in a couple of years and he joins a touring troupe at Second City.

Granted, your appreciation of Obama’s humor likely depends on your political leanings. I doubt, for example, that Orly Taitz ever laughed at any of the birther jokes with which he has peppered his annual routines at the WHCD, or that featured as the culmination of this bit he taped for a televised celebration of Betty White’s 90th birthday. It’s tough for people to laugh at themselves, particularly if it gets in the way of self-righteous zealotry.

Part of the reason Obama has become our funniest comedic performer president is opportunity, of course. His time in office coincided with an explosion in online video and TV, and his administration more than any other has eschewed traditional media to help him get his message out. For example, his appearance on “Between Two Ferns” with comedian Zach Galifianakis was intended to inform people about the launch of healthcare.gov. But it’s true that he is also a relaxed performer in a way that George W. Bush, who also had some similar outlets available to him during the last decade, never was. If you doubt that, here is Bush at the 2007 WHCD dinner, reading a joke-filled speech with all the aplomb of a little kid forced to put on a suit and spend Sunday in church.

This being politics, there is probably something in the content of Obama’s performance reel that is offensive or cringe-worthy for everyone. Opponents of drone warfare might wince, as I did, re-watching his 2010 WHCD speech when he joked about sending a Predator drone after the Jonas brothers if they so much as looked at his daughters. I’m sure a lot of people got angry at the end of the 2014 WHCD speech, months after the difficult rollout of healthcare.gov, when Kathleen Sebelius walked out onstage and pretended to help the president fix a balky video of himself. “That’s not funny! People suffered,” I imagine wingnuts yelling at the screen as they watch it.

Some of this criticism is sour grapes, the long-standing right-wing belief that in Obama, those damn Democrats elected a man who cares more about preening for the camera than governing. (This line of thought is particularly ironic, considering the current Republican presidential nominee.) But – and it pains me to admit that conservatives are even in the same zip code as a smart idea – there is a kernel of truth here, not about Obama specifically but about what we demand of our presidents when they stand before us in all their guises.

In the modern presidency, image is king. Administrations obsess over approval ratings, particularly when re-election is coming up. Projecting likability, that vaporous and subjective quality, becomes more important than anything. We ask that presidents comfort us with their seriousness, inspire us with bravery, and entertain us with their jokes. We demand that they be humans and superheroes all at the same time. We put them in positions where the only choices are awful and then complain when they pick one.

Laughter is the great agent of disarmament of criticism. Yet I’ll still miss Obama’s performances when he’s gone. He was better at it than anyone else we’re likely to see.