The media may have stopped talking about it, but the Flint water crisis is far from over

While press coverage has dwindled, one woman is working to make sure the city of Flint does not fall into obscurity

By Jaimee A. Swift 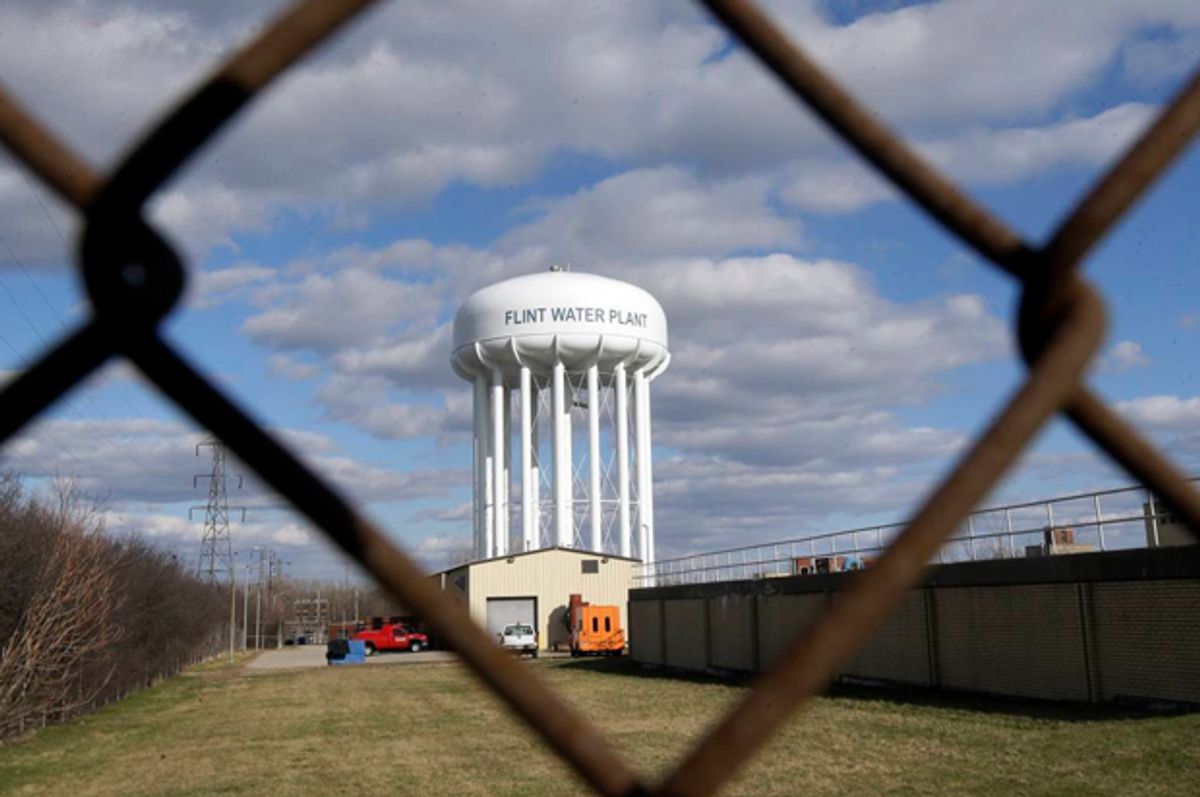 “The national media [attention] has waned, but we are trying to keep the story alive,” Dr. Mona Hanna-Attisha said, with a voice of sheer determination.

After becoming the face of a national movement, Hanna-Attisha, the pediatrician who helped unmask the water crisis in Flint, Michigan, knows all too well — for herself and the residents of Flint — the disaster which almost destroyed the city is far from over. The series of unfortunate of events leading up to the calamity, the world knows all too well — the city stopped using Detroit’s water supply to use water from the Flint river as an economic measure in April 2014.

High levels of lead permeated the pipes and infiltrated the water supply, while Flint locals complained incessantly about the water’s color, taste and odor, and reported several incidences of strange rashes and skin outbreaks. Yet, government officials assured residents of a majority black city, the water was not a “threat to public health” and “safe to drink.”

“Safe” could not have been further from the truth. And if it was not for the paramount research conducted by Hanna-Attisha and her team of doctors at Hurley Medical Center in Flint, the city would still be in the dark about what many consider to be one of the most egregious domestic health and human rights violations.

“We were hearing reports there was lead in the water, and as pediatricians, when you hear there is lead anywhere, it’s a no brainer, we had to figure out if the lead was getting into the bodies of our kids,” Hanna-Attisha said. “That is when we started our research to see if the lead in the water was actually impacting children’s blood levels.”

And they were right — the lead did impact the children. Unfortunately, the lead exposure will continue to be an unrelenting issue; its effects to yield unsuspecting health consequences and complications in the years to come. In the summer of 2015, researchers from Virginia Tech sampled water in 271 homes in Flint, and according to The Washington Post, tests showed lead levels were immense enough to meet the Environmental Protection Agency measure of “toxic waste.”  While the EPA does not initiate action until lead levels reach 15 parts per billion, in August of last year, data showed Flint water was contaminated with 11 parts per billion of lead, and the Department of Environmental Quality notified officials to utilize corrosion control.

However, the mandate came a little too late, as the lead count in the blood of children and infants had already doubled, based on findings from a September 2015 study conducted by Hanna-Attisha’s team at Hurley Medical Center.

“There were a lot of things going on in the water that was affecting the people,” said Hanna-Attisha. “Obviously, the lead in the water was an issue. Many people had skin issues. The water crisis also caused the largest outbreak of Legionnaires’ disease in the country, during that time period, and twelve people died from that.”

“A lot of health issues happened, but there are a lot of health issues yet to be declared,” she continued. “Lead poisoning usually does not present with acute symptoms — like today problems — but it is something that impacts [children] for a lifetime. It impacts cognition, and it impacts behavior. That is why there is no safe level of lead allowed in a child.”

Two years later, the water in Flint is still polluted, and unsafe to drink. In May, Flint residents and civil rights groups joined forces to address U.S. District Judge David Lawson about expediting the 2½ month response time of supplying clean water to residents. The petition to hasten the emergency water relief was spurred by a lawsuit filed in January, to ensure Michigan officials restored the Flint’s lead service, in compliance with the federal Safe Drinking Water Act. The lawsuit also demanded bottled water to be delivered to residents who cannot readily access transportation services.

“There’s an ongoing present harm from the continuing leaching of lead from the pipes,” said Dimple Chaudhary to Judge Lawson during the hearing, as reported by The Detroit Free Press. A National Resources Defense Council attorney, Chaudhary represents Flint residents, activist and civil rights groups, who are still desperately in need of clean drinking water.

Despite the countless donations that have flooded the city, resources in Flint are still scarce. While juggling the demands of motherhood, her research, teaching, and now, activism, Hanna-Attisha spearheads several organizations, alongside community members, to increase support of the short and long term needs of children exposed to lead. The Flint Child Health and Development Fund is one of those many initiatives, and serves an auxiliary fund until additional state and federal funding is received and appropriated. Established at the Community Foundation of Greater Flint, the fund will be used to support aid and interventions such as access to infant and child behavioral health services, optimal child health and development, research, and more.

According to their website, the fund has “raised over $6 million, and awarded $773,664 in grants”, and also revenue from other funds supporting the Flint Water crisis. Countless faith-based organizations across the country such as the Muslim American Leadership Alliance (MALA), Zen Buddhist Temple of Ann Arbor, and Mt. Sinai Missionary Baptist Church of Los Angeles, have rallied behind and monetarily supported the Flint cause.

On Monday, Beyoncé announced she raised more than $82,000 for Flint relief efforts, and proceeds were sent to the United Way of Genesee County. The donation was raised by the help of fans when purchasing tickets for the singer’s Formation World Tour.

While Hanna-Attisha says the outpouring of interfaith solidarity and donations has “really reaffirmed [her] faith in humanity”, more money, more help, and more resources are still needed.

“Our water is not safe to drink yet, and we really have yet to garner the long term support to take care of our community,” said Hanna-Attisha. “We are a ‘federal emergency’, and we are not considered a federal disaster because it was man-made, so that didn’t free up significant resources.”

“Even money is tied up at our state-legislature, so I continue to talk, talk, talk, talk, and tell the same story, because the Flint story is not over,” she continued. “No matter how tragic this is, we are committed to our kids, and [we are trying] to make sure they have the brightest future, but we need resources to make that happen,” she said.

While Hanna-Attisha believes President Obama’s visit to Flint in May instilled much-needed encouragement to residents, and his vow “to not rest” until “every drop of water that flows to your home is safe to drink, and safe to cook with, and safe to bathe in” offered a glimmer of hope, she wished the President offered more concrete socio-economic measures to ensure the implementation of sustainable and positive health outcomes for Flint.

“His message was beautiful. He talked about the necessary role of government, to provide services, and how we need to protect public health,” she said. “He very much tried to instill hope in the community, but it would have been great if he announced a nationwide infrastructure program, or a Flint universal head start.”

Despite the negativity swirling around the water crisis, minimal resources, and lack of accountability by Flint government officials and politicians, Hanna-Attisha noted the experience has not all been bad — surprisingly, positive outcomes have catalyzed from the health disaster.

“There are some great things that happened because of Flint. It has definitely raised our national consciousness on other injustices,” she said. “We are now hearing about other places with lead issues, water contamination, and infrastructure issues, but it all boils down to what we value as a society, how we invest in public health, and how we protect our most vulnerable populations.”

So, what is in the future, for Hanna-Attisha and the city of Flint?

After recently signing a book deal, she continues to be a relentless and fearless advocate,  speaking at various events to relay to the world a critical, yet resounding message: while the sensationalism surrounding the story has quieted, Flint still matters, and the community will not be defined by the public health calamity, but ultimately, how they pick up the pieces after.

“[I] keep talking and talking, because of the national repercussions — we can’t let this happen again,” she said. “The Flint I see, is going to have a brighter tomorrow, really better than yesterday ever was.”

“We are going to bring in resources, interventions, and program for the kids, and better schools, nutrition, and economic development, so our children [can] have a brighter future.”

By Jaimee A. Swift

Jaimee A. Swift is a Washington, D.C. based writer/activist, who is passionate about social justice. You can follower her on Twitter @JaimeeSwift

MORE FROM Jaimee A. Swift