Trump's lies aren't unique to America: Post-truth politics are killing democracies on both sides of the Atlantic 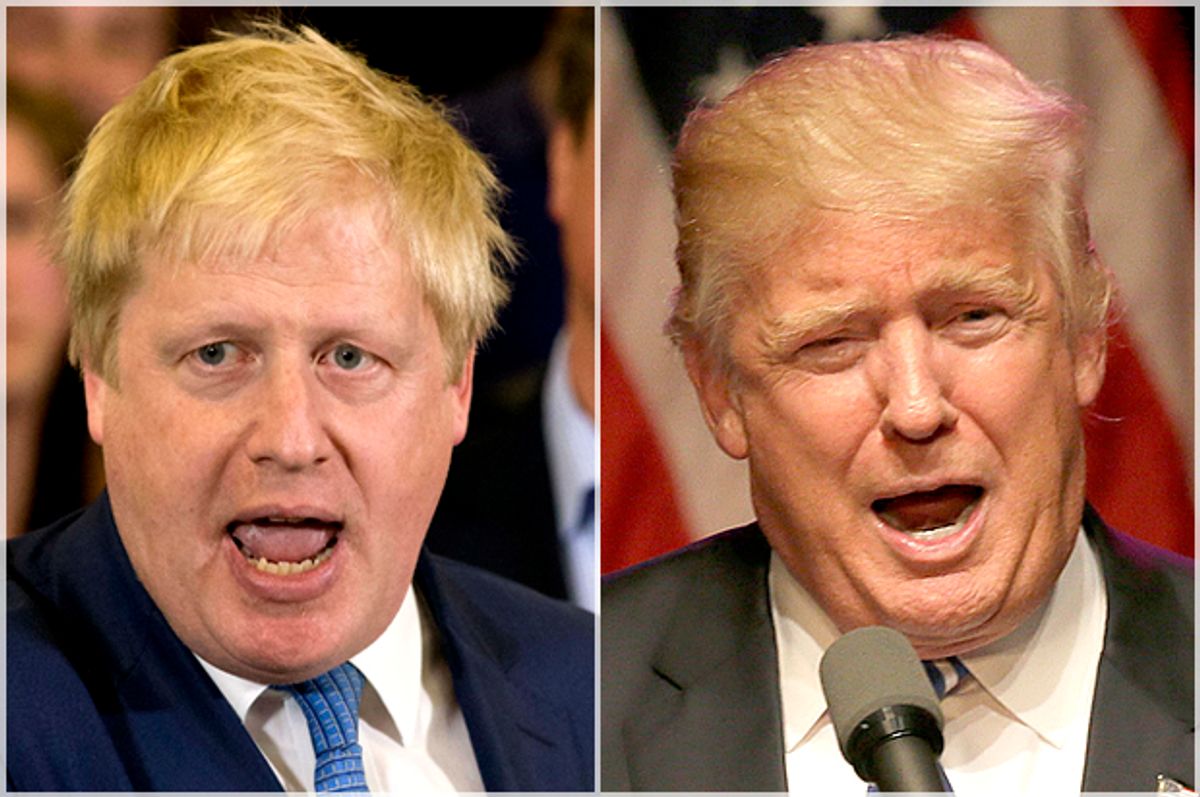 So said Marty Baron, executive editor of The Washington Post, in a speech he gave to Temple University’s newest Media and Communication graduates not two weeks ago. Baron was talking about a new form of politics that’s been taking hold, a kind that brings into question the prospects of these hopeful future journos, a kind that threatens democracy as we know it.

As Donald Trump makes another one of the countless absurd claims he’s made during his campaign (this time, following what happened in Florida last weekend, we’re to believe Barack Obama supports ISIS), on the other side of the Atlantic potential future Prime Minister Boris Johnson continues to stoke voter immigration fears. Now, his campaign is assuring fellow Britons that a vote to Remain in the European Union will see Turkish migrants flooding across the border.

Neither of these claims are true. It should go without saying that the president of the United States takes no pleasure in a man massacring 49 of his fellow Americans in Orlando, while the chances of Turkey ever joining the EU are slim to non-existent. All the same, these two politicians are popular – immensely so – because they’ve discovered they can reach the top simply by inventing their own versions of the truth. For various reasons, not only are they getting away with cooking up their own "facts," but Trump and Johnson are as a result of their fabrications gaining new supporters all the time. He didn’t use the term in his Temple speech, but there’s a name for what Marty Baron was talking about: post-truth politics.

The danger today is that the most unscrupulous of politicians, figures with a real contempt for the electorate, are the ones most likely to exploit voters in the post-truth era. Enter Donald Trump and the Leave campaign. Trump and Leave, headed up by Boris Johnson, are but products of this new system, pushing bigger and bigger fibs and always finding there are zero repercussions for deceiving the electorate – not when the media and the voters fail to sufficiently hold them to account.

The information age hasn’t yet liberated us quite like it could have done. We live today in a world where all the facts we could ever need or want are readily available to us in seconds flat, at the clack of a few keys. In the age of the internet every single one of us can personally hold our politicians to account, cutting out the media middle man by acting as our own fact-finders. It’s increasingly clear, however, that many of us aren’t necessarily interested in facts.

Chris Cillizza at The Independent argues that there has been a “death of the belief in fact” for a number of reasons. There are two major factors: 1) we increasingly self-sort ourselves into like-minded communities (whether physically or online, or both), and 2) despite all our choice, we insist on visiting sites and watching shows that affirm views we already hold. According to Cillizza, this results in a “siloing effect” in which one can “go through each day as a well(-ish)-informed person without ever hearing a sliver of news that contradicts what you already believe.” Would so many continue to support Trump if they just looked out their own window for an hour, and discovered he was lying through his teeth on an almost daily basis? Most likely not.

Still, we aren’t solely the ones at fault. Back in February, CBS CEO Leslie Moonves, citing Trump as “damn good” for business, was quoted as saying: “It’s a terrible thing to say, but bring it on, Donald. Keep going.” The bottom line hasn't been whether or not Trump and his regularly wild statements deserve the air time, but whether he helps turn a profit. Moonves and many other network execs have done very well this presidential season thanks to Trump, so they’ve given him $2 billion in free coverage. The media helped to create Donald Trump by insisting that whatever he said, no matter how outrageous, was worth airing, thus giving import to his nonsense. Even if there has been scrutiny of the Trump campaign, most notably from political comedians (often doing more impactful journalistic work these days than the full-time journalists), what Trump supporter – assured for years by a paranoid right-wing press not to trust anything from the mouths of liberals – would think to believe it?

So, we now have Trump competing to enter the White House; we have Britain potentially about to leave the EU despite the vast majority of experts advising voters against it. Voters in the UK, as in the US, have very little faith in the so-called experts anymore, and without proper scrutiny from a media more interested in turning the Brexit battle into a spectator sport, the Leave campaign is winning voters based on fallacies it peddles and promotes. This is the post-truth system: our least honest politicians tell untruths, and the media – the prism through which many of us still view this world – too often declines to correct them.

For example, when UK headlines had Leave claiming Britain was under threat from a wave of Turkish settlers, it was not widely reported that Turkey – far from being a contender for EU membership – meets only one of the 35 criteria required to join, and that member states like Greece and Cyprus would almost certainly veto the country joining regardless. Nor was it mentioned that Leave leader Johnson had only recently campaigned FOR Turkey to join the EU, or the fact that Johnson, so terrified of those dastardly Turks, is himself part-Turkish, the great-grandson of an Ottoman journalist named Ali Kemal. Proper reporting of such facts would, of course, have undermined Johnson and the Leave campaign. The press, however, remained largely silent on those things.

Such inaction has helped give rise to a dangerous new form of politician. Surely little good can come of post-truth politics from here on out. As long as such behaviour is deemed acceptable, we shouldn't be surprised that our leaders continue to be so flippantly untruthful. As long as the media declines to hold post-truth politicians to account, and as long as we fail to do the job ourselves, there will only continue to be a disconnect between the truth and what the general electorate believes. There will be consequences. Donald Trump may become the next President of the United States, and Britain is quite probably about to exit the European Union. It could get worse than that.

On Thursday, in the UK, we perhaps saw how post-truth politics can prove fatal, when Jo Cox – a Labour MP – was killed by a man yelling “Britain first,” a rallying cry for those who believe that immigration into the country is too high. Cox had used some of her brief time spent in politics campaigning on behalf of refugees and migrants, but in an environment where the more deceitful politicians and media have convinced the electorate that immigration figures are double what they actually are, she was, to some, the enemy. It could be argued – indeed, it has already been argued – that Jo Cox was killed because lies and exaggerations from up above have taken hold as hard facts. What else might happen simply because the truth is no longer being heard?