We need you, Seth Meyers: Don't ban Donald Trump from your show—take him down

Donald Trump’s “one-hate-fits-all” approach worked well in the primaries, but now he needs to be challenged head-on 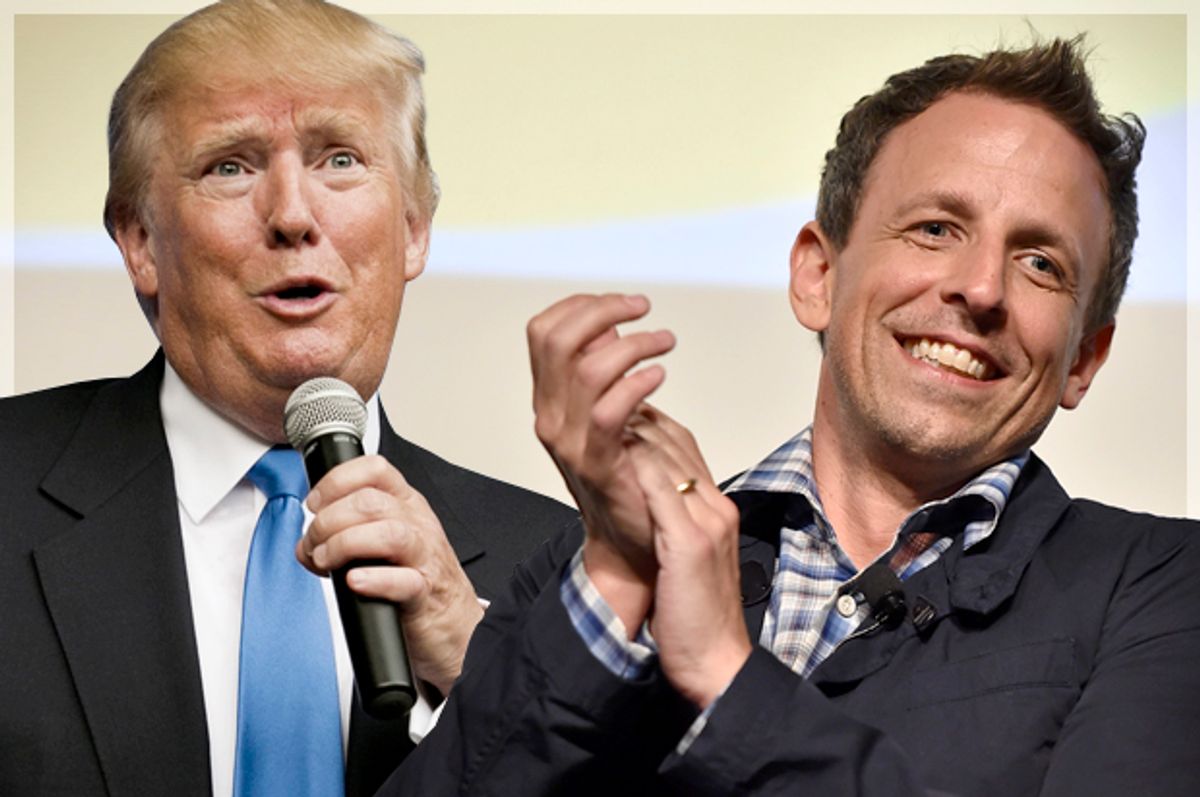 The late night host issued a lifetime ban to presumptive GOP nominee Donald Trump in response to the billionaire CEO’s announcement that he would be revoking the press credentials of the Washington Post. The loose-lipped businessman has a history of refusing to engage with media outlets critical of his outlandish statements on Muslims and Latinos, whom he has threatened to ban and deport, respectively, from the United States. These outlets include the Huffington Post, BuzzFeed, Politico, and the Daily Beast, all of whom Trump has blocked from media invite lists.

“As long as the Washington Post is banned from Donald Trump's campaign, Donald Trump will be banned from ever coming on this show," Meyers said Wednesday evening. Stating that the CEO’s candidacy is “stoking fear and spreading hate,” the late night host continued: “We instituted this ban despite the fact he's never been here, or asked to be here, or would ever be caught dead here.”

While Meyers’ stance on not allowing his program to be used as a megaphone for hate speech is commendable, banning Trump isn’t the answer. Recent polls have shown that the more the general public hears what Donald Trump has to say on the issues, the less they like him. While the businessman’s outlandish, xenophobic views attracted interest to his campaign in the primaries, Trump is quickly experiencing a freefall in the general election. His penchant for “telling it like it is” and distaste for “political correctness” might have won him the nomination, but the platform he built may be the very thing that destroys him.

Seth Meyers shouldn’t disinvite Trump. If Meyers really wants to take a stand against hate, he should let him talk until he alienates every single person in America.

As the latest polls show, Trump is digging his own grave with the laser-focused precision of an expert undertaker. Data from RealClearPolitics, which averages election surveys from across the country, shows that the candidate’s support has plummeted in recent weeks. Trump’s popularity recently peaked between May 22 and 25, a brief window in which he actually led presumptive Democratic nominee Hillary Clinton in national polls. That surge, bolstered by a GOP rallying around its likely contender, rapidly eroded. Currently, Trump is polling with just 38.3 percent in a head-to-head matchup against Clinton. Those are his lowest numbers since last August.

Those are historically low numbers for a man who—in the halcyon days of national Trump Fever—threatened to remake the electoral map in his image.

As the National Review points out, he’s on pace to fare worse than any candidate in the previous three elections. Mitt Romney’s lowest numbers were logged his very first day in the race on February 3, 2011—when he polled at 41.5 percent. Like George W. Bush. He never polled below a 40 percent. John McCain’s worst days as a candidate were between November 23 and 29 in 2007, when he earned just 38.3 percent of likely votes. But after hitting rock bottom, McCain’s campaign surged in the two months following those polls.

Meanwhile, Trump is already on a downward spiral. A recent survey from the Washington Post showed that 70 percent of voters view him unfavorably.

What happened in the past two weeks, you might wonder? On Sunday, Orlando witnessed the deadliest mass shooting in U.S. history when an armed shooter gunned down 49 people at Pulse nightclub, a gay bar that served as an oasis for LGBT people in the city. Police speculate that the gunman may have been motivated by an extreme fundamentalist interpretation of Islam. He apparently, though, didn’t know the difference between Hezbollah, al-Qaeda, and ISIS, despite the fact that the three terrorist groups are sworn enemies.

Trump used the shooter’s very tenuous connections to terrorist organizations to congratulate himself for being right about Muslims all along. The CEO has restated his intent, if elected president, to “suspend immigration from areas of the world when there is a proven history of terrorism against the United States, Europe or our allies, until we understand how to end these threats.” He has previously discussed entering U.S. Muslims in a database to track them.

Trump wasn’t even close to being finished. He also admonished Muslims for not doing more to stop the attacks. “They know what’s going on,” Trump said. “But you know what? They didn’t turn them in.” In addition, the candidate suggested that President Barack Obama, whom he criticized for not calling “radical Islam” out directly during his response to the Orlando shooting, may be a terrorist. “[Obama] doesn’t get it, or he gets it better than anybody understands,” Trump said of the president’s Sunday address. “It’s one or the other. And either one is unacceptable.”

For Trump, these statements make brand sense. During the primary elections, he noted that the more he discussed terrorism—thus, stoking America’s underbelly of racism and Islamophobia—the better he did. “This is a subject that is very dear and near to my heart, because I’ve been talking about it much more than anybody else,” he told NBC News in March. “And it’s probably why I’m number one in the polls.”

That strategy, however, has fared very poorly in the wake of the Orlando shooting. A poll from CBS News showed that the public overwhelmingly rejected Trump’s calls to demonize Muslims. Just 25 percent of Americans said that they felt positively about his response, while a majority said that they disagreed with how he reacted to the crisis. This is partially because few believe it was motivated purely by religious malice. While a majority of Americans labeled the act as both a hate crime and a terrorist attack, more were likely to view Orlando solely as an act of anti-gay hate than one motivated by fundamentalism.

Trump’s “one-hate-fits-all” approach worked well in the primaries, which are a kind of safe space for extremism. Both the New York Times and the Washington Post noted that the more inflammatory his statements got, the more voters supported him.

Let’s face it: Those already converted to Trump’s brand of single-minded bigotry may always remain part of the faithful, right down to election day. But when it comes to appealing to the swing voters and moderates who decide general elections, Trump is electoral poison. The CEO lacks any nuanced analysis of the way the world works, an unappealing quality when you’re trying to cross partisan divides. He is currently being decimated by Clinton in battleground states, where the former Secretary of State is beating him by a solid five points. According to Politico, she’s ahead in eight of the 11 coveted swing states.

Given that Trump has been on an anti-Islamic tirade in the past week, it makes sense that Seth Meyers would want to treat Trump like a drunk at the bar and cut him off. The host’s stance is markedly similar to “no-platforming,” a tactic popular with students in the U.K. Its intent is to “deny fascists, organised racists and other haters the freedom to spread their poison within communities unchallenged,” as Hope Not Hate founder Nick Lowles told The Independent.

The problem is, though, that Trump’s platform is strongest when he remains unchallenged. Were every late night show to disinvite him and every news channel decline to cover him, Trump would still have his 9 million followers on Twitter to console him, a platform that allows him to routinely spout dangerous misinformation and outright lies. The problem isn’t that too many people have been willing to give Trump a platform, but that few have used the platform they have to stand up to him. He was given a free pass by the media for months before the grave danger he poses to every single American was taken seriously.

Should Meyers change his mind, he is in a unique position to use his show to challenge Donald Trump face-to-face. Since taking over late night duties from Jimmy Fallon last year (after the former SNL giggle machine upgraded to Jay Leno’s former chair), he’s become broadcast’s answer to Jon Stewart. But given his own background as an anchor for “Saturday Night Live”’s Weekend Update, it’s perhaps unsurprising that Meyers’ show has been so explicitly political.

In his stint as a host, Seth Meyers has taken on topics like Planned Parenthood, campaign contributions, and House Bill 2, the anti-transgender bathroom law in North Carolina. His take on the latter is actually a valuable explainer to those unaware of why the issue matters to trans folks everywhere. “Fighting over bathrooms is the oldest move in the prejudice playbook,” Meyers said. “America has a long history of using bathrooms to scare people … and politicians are happy to exploit that fear.” After HB 2 was pushed through the North Carolina legislature in March, transgender people were effectively barred from using the public restroom that most closely corresponds with their gender identity.

Meyers’ most famous moment as a host, though, was likely when he invited on former presidential candidate Ted Cruz to discuss a town hall gaffe that quickly went viral on the Internet. While Cruz discussed the threats facing America today, he hyperbolically claimed, “The world is on fire!” A young girl took his statement literally and got very upset. “The world is on fire?” she cried.

In their interview, Cruz clearly believes that he’s there to be chummy with Meyers, as if he were appearing on Jimmy Fallon’s show. Fallon doesn’t challenge his guests. He doesn’t push back. He’s there to make it look like the two of you are best friends and having tons of fun, like the world’s most public slumber party. When Fallon invited Trump on the show last year, the host played Trump interviewing himself in the mirror. “Saturday Night Live” took a similarly puffy approach with Donald Trump, treating him like America’s favorite in-joke. In one sketch, Trump rewrites the Constitution, frequently inserting the word “huge.”

Meyers quips that he hoped that Cruz’s town hall speech was actually an appeal to do something about climate change and that the Texas Republican had finally come around on the issue. “I think the world is on fire—literally,” Meyers said. “Hottest year on record.” The Tea Party favorite quickly launches into his absurd climate change denialism, which sounds no more coherent than the speech that landed him on late night to begin with.

Instead of taking Trump’s mic away, Meyers should treat Trump exactly the same he did Cruz: Turn up the volume as loud as possible. Maybe then those who are still on the fence about him (which is a surprisingly large number of people) will finally hear his racist demagoguery for what it really is.