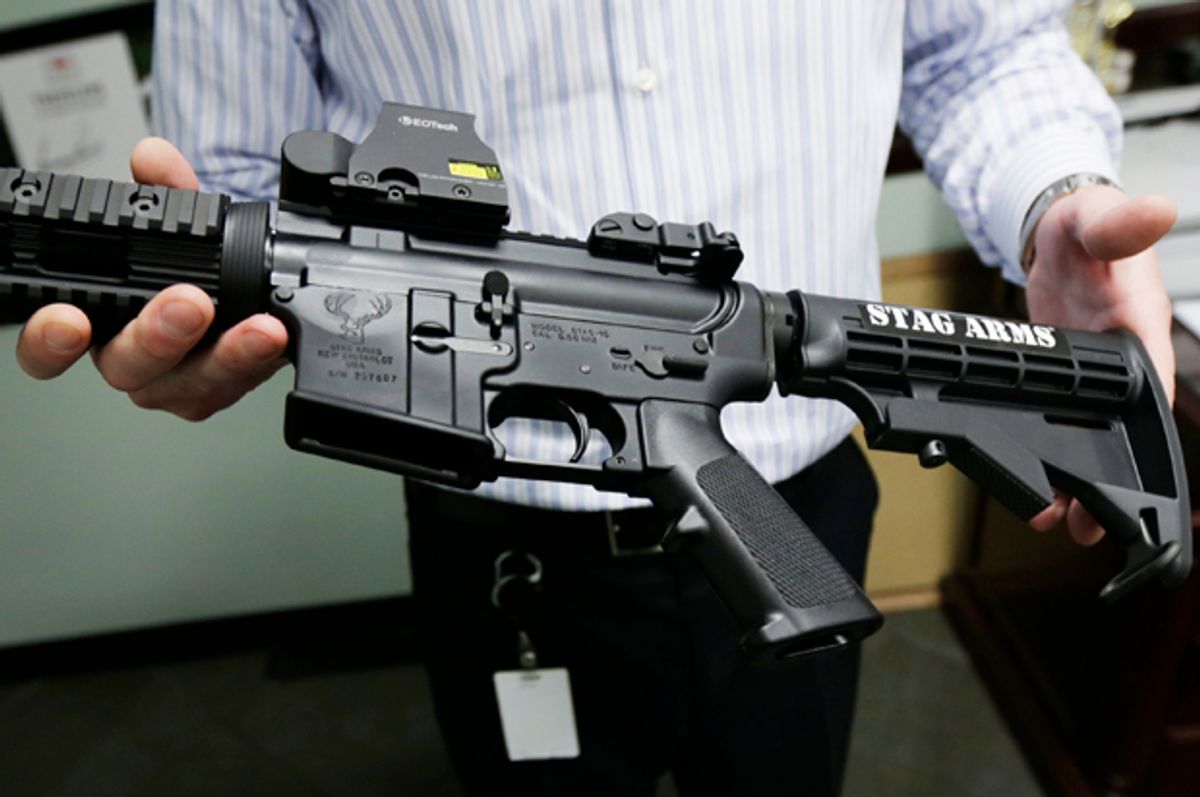 Overall, gun deaths in America have been steadily dropping over the past two decades, even as mass shootings—those sudden, paroxysmal clenches of incommensurable violence—have been rising. What’s to account for the spike? Nobody seems to know. But the latest tragedy in Orlando has given rise to a collective wail of outrage now verging on the cusp of a political movement to do something, anything, to #MakeItStop. Using that hashtag, the Boston Globe has been grimly tweeting the names of the victims of mass shootings in this country. In a withering editorial, the newspaper proposed a sweeping ban on assault weapons, i.e. the AR-15 and its ilk. A recent poll showed that the idea of such a ban now has the support of 57 percent of the American public.

Adam Winkler has a different approach. A professor of law at UCLA, Winkler is the author of "Gunfight: The Battle over the Right to Bear Arms in America." In response to the mass shooting in Orlando, he wrote an op-ed for the New York Times that proposed creating a “no-buy” list akin to the “no-fly” list. This no-buy list would, he argued, respect the rights conferred by the Second Amendment while allowing for the possibility of commonsense restrictions on a case-by-case basis. Regarding the shooter in Orlando, for example, it has since emerged that the FBI had twice interviewed Omar Mateen for suspected links to terrorism, but could do nothing to prevent him from legally buying firearms in spite of a history of domestic violence inside a longer pattern of troubling behaviors. In the future, a ”no-buy” list could make it possible for law enforcement to restrict the access of such individuals to firearms.

I had questions, so I asked Winkler to clarify his thinking on this topic. This interview has been edited for length and clarity.

First off, why not just re-institute the “assault weapons” ban that expired in 2004?

I think that would be a mistake. A ban on military-style rifles won't do much to stop criminal activity and, in the case of mass shootings, handguns are used more often and to equally devastating effect. Contrary to popular wisdom, these are not machine guns, which have been effectively outlawed for sale since 1986. Like a handgun, you need to pull the trigger for each round you wish to fire. Most of these guns are basically rifles with military styling. When the federal assault weapons ban was in effect, the manufactures just made slight alterations in the design and sold the same guns, with the same lethality, by the millions.

Basically, banning assault-type weapons to prevent mass shootings is like regulating drunk driving by banning scotch. Most people seem to believe that it is more like banning all hard alcohol, leaving drinkers with the less powerful spirits, like beer and wine. In fact, it’s more like banning scotch and allowing people to drink vodka, tequila, and rum. Even with a ban on assault weapons, there will still be equally powerful weapons out there.

What do you say, then, to limiting the size of magazines, which is another popular proposal pertaining to gun regulation?

On the face of it, it makes more sense to regulate high-capacity magazines, which can hold more than 10 rounds of ammunition, than to regulate the assault rifle itself. If the problem we wish to solve is the ability of someone to shoot a lot of rounds without having to reload, focusing on magazine capacity is sensible. Yet there are no easy answers. In places where high-capacity magazines have been banned, like San Francisco and Los Angeles, early reports are that few people, if anyone, have turned their magazines in. Because so many guns come with standard with a high-capacity magazine, gun owners do not appear willing to give up their magazines.

Then, as a corollary, how about regulating the sale of ammo itself? In Japan, for example, gun ownership is exceptionally strict; licensed owners not only have to file paperwork with their local police precincts regarding their firearms, but also their ammo. That’s a lot of regulation, and it is also to be emphasized that Japan’s gun culture has virtually no points in common with that of the U.S. That being said, there are hardly any gun deaths in Japan, let alone mass shootings. The right to purchase ammo is not specified in the Second Amendment, is it?

Actually, ammunition is likely protected by the Second Amendment. The Supreme Court has said the amendment guarantees your right to have a fully functional firearm, and by implication this includes ammunition. You can quibble about how many rounds are necessary for a firearm to be fully functional, but for the gun to be used in home defense, for example, the homeowner needs ready access to ammunition.

Okay, so let’s get to your proposal, which suggests a no-buy list akin to the no-fly list. The trouble is that lots of people ended up on the no-fly list who shouldn’t have been there in the first place, such as an 18-month-old toddler. This, along with too many similar stories, does not inspire me with confidence that a “no-buy” list will be run smoothly and ethically.

The no-fly list should be fixed—and my proposal for a “no-buy” list offers a way.  We can have procedures in place to prevent the wrong names from appearing on these lists by requiring judges, say from the FISA court that currently oversees intelligence gathering, to approve someone’s inclusion. The key is due process, putting procedures in place that ensure fairness and basing a no-buy list on individualized suspicion. Critics are comparing the no-buy list to the Japanese-Americans during World War II—a blunderbuss approach—when the better analogy is to the lesser-known internment of German-Americans during the war. They too were interned, but only on the basis of individual suspicion.

In your op-ed, you mention the Fourth Amendment law on search and seizure, which stipulates the necessity of probable cause. The Foreign Intelligence Surveillance Act of 1978 (FISA) authorized wiretapping and other forms of electronic surveillance. These powers were expanded under the Patriot Act, which was later amended with a “lone wolf” provision whereby “agents of foreign powers” can include U.S. citizens. Now, in order to conduct this kind of surveillance, you have to go before a judge. It’s secret—the petition does not take place in a courtroom but is instead an in camera hearing, with records kept confidential. All of which worries me, because it seems rife with potential to create a Kafkaesque nightmare of institutional abuse.

The American answer to worries about governmental abuse is checks and balances. We do not concentrate power in any one branch of government. Proposals for a no-buy list that give unfettered discretion to the executive branch to decide who is a suspected terrorist are wrongheaded. My proposal, by contrast, involves using the FISA court to approve the inclusion of anyone on the no-buy list. And individuals should be able to challenge the FISA court’s judgment in an ordinary, open court procedure.