"Orange Is the New Black" could help save trans inmate lives: Prisons continue to fail women like Sophia 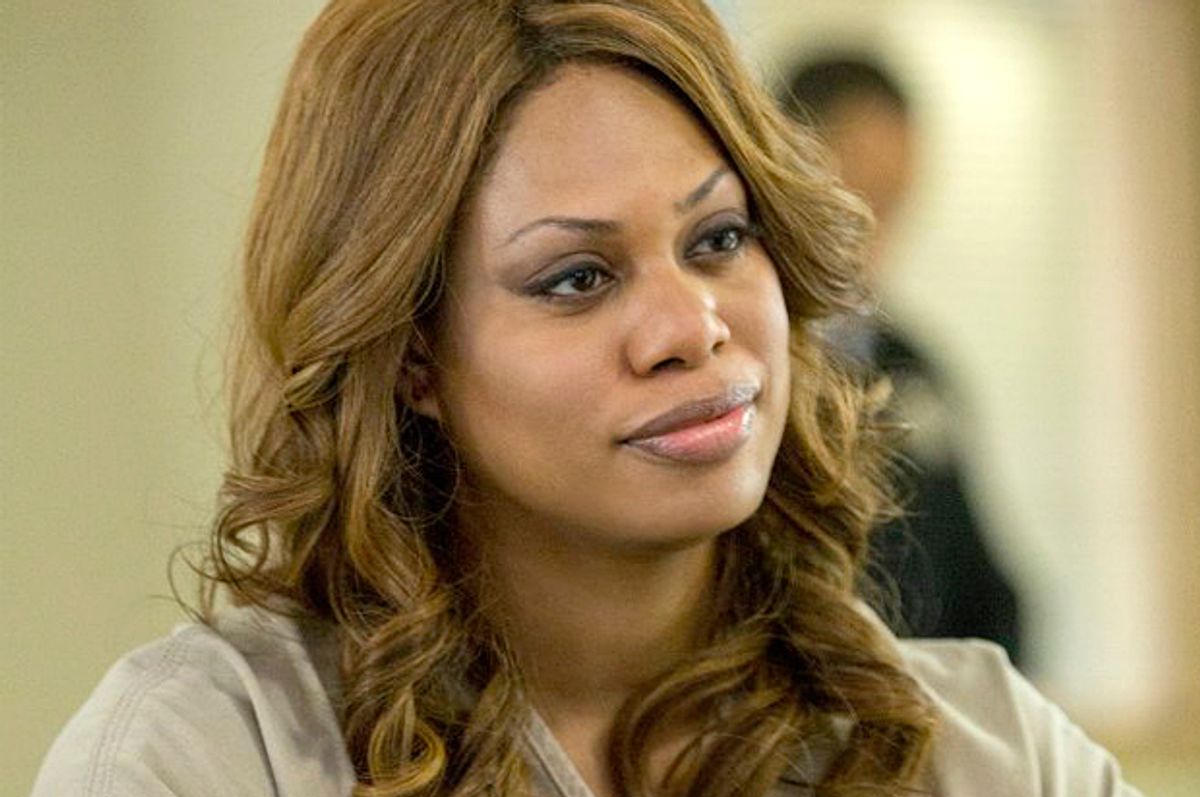 Laverne Cox in "Orange Is the New Black" (Netflix)
--

“Ever seen me look this ravishing?” Sophia asks. Nicky, her former prison mate, responds with her trademark sarcasm, but even she can’t mask her shock at the horror she’s witnessing. “If we’re using ‘ravishing’ as a synonym for ‘horrendous,’ never,” Nicky says.

This scene is a standout moment from Netflix’s “Orange Is the New Black,” Jenji Kohan's prison dramedy whose fourth season dropped on the streaming platform Friday. The acclaimed show takes a darker turn in the fourth season, detailing the everyday injustice of the prison system. After Litchfield becomes a for-profit institution, the prison becomes punishingly overcrowded; if you don’t get to the cafeteria early, you don’t get to eat breakfast or lunch at all. New inmates, unable to get work assignments, have no resources to buy tampons from commissary. They are, thus, forced to get creative about their hygiene needs.

Sophia Burset (Laverne Cox) is the face of that structural inhumanity. Played by Emmy nominee Laverne Cox, Sophia has been thrown into the Solitary Housing Unit (or “SHU”), allegedly “for her own protection.” As the only transgender inmate in Litchfield, she was the target of harassment and violence from other prisoners in the show’s previous season; this year, Sophia finds little comfort in solitary. The fluorescent light is kept on 24 hours a day, and she isn’t even given a blanket to keep warm. When Nicky finds her, Sophia claims she hasn’t slept in days.

Sophia’s powerful storyline is indicative of the grave abuses that transgender inmates face when housed in correctional facilities, whether it’s in the United States or abroad. Trans women, in particular, are frequently denied access to hormone therapy, gender reassignment surgery, or affirming health care. In addition, these inmates are often housed in men’s prisons, where they are likely to be abused or sexually assaulted. Many prisoners like Sophia will be isolated in solitary confinement for weeks, years, and sometimes even decades, which both increases the risk of serious psychological damage—and even suicide.

For trans people, the current state of mass incarceration amounts to cruel and unusual punishment. While things are slowly improving, transgender inmates remain locked away and ignored in a system that often refuses to recognize that they are human—let alone affirm their gender identity.

In 2016, the Department of Justice issued a groundbreaking memorandum stating its official policy that transgender inmates cannot be assigned to prisons based on their anatomy alone.

“The [Prison Rape Elimination Act] standards require that housing decisions for transgender prisoners be made on a case-by-case basis,” the National Center for Transgender Equality explained in a press release. “The new guidance makes clear that housing transgender people based solely on sexual anatomy is not ‘case by case.’ Instead, detention facilities must seriously consider all factors relevant to keeping a person safe, including their gender identity, the gender they live as, and their own view of where they would be safest.”

Prior to the DOJ decision, many states, including in Colorado and Pennsylvania, outright denied gender-affirming housing for trans inmates, while others—like Massachusetts—made subjective decisions based on the prisoner’s “biological gender presentation and appearance.” When the department’s guidelines were released, Harper Jean Tobin of the NCTE told Vocativ that the improper assignment of trans inmates is a “universal” problem with the U.S. Department of Corrections, one that extends to every state in the nation. According to the Bureau of Justice Statistics, there are around 3,200 trans people behind bars in the U.S.

But unfortunately, the DOJ guidelines are just that—guidelines. Detention centers can choose not to follow them. That’s a huge problem in a system rampant with routine human rights abuses, particularly against populations already vulnerable to harm.

In 2007, a study from the University of California Irvine found that 59 percent of transgender women are sexually assaulted while in prison, whereas just 4 percent among the general population report being raped by guards or other prisoners. The rate of trans sexual assaults is, thus, an astounding 14.75 times higher, and in many cases, these incidents occur with shocking regularity.

A trans inmate in the United Kingdom reported being raped “more than 2,000 times,” and in the U.S., Ashley Diamond sued the Georgia Department of Corrections, detailing years of “torture” in a men’s prison. As the New York Times reports, Diamond was raped seven times, mocked because of her gender identity, and frequently sent to the SHU for the crime of “pretending to be a woman.” Correctional officers repeatedly referred to her as a “he-she thing.” According to Diamond’s suit, she frequently tried to take her own life, even attempting to castrate herself.

Cases like these are extremely common in the prison system. A particularly egregious example is Passion Star, a trans inmate who was repeatedly harassed by guards, instructed to “suck dick” and “stop acting gay.” When Star was threatened by a gang member, she requested transfer to another cell to be kept safe from harm. Instead, officials did the opposite—moving her closer to her harasser.

In addition to being misgendered by officials and taunted by other prisoners, trans inmates are frequently denied hormone therapy, which can have extremely damaging effects on inmates’ health.

A 2014 survey from Black & Pink found that 44 percent of trans people in U.S. correctional facility are denied hormones, even if they were undergoing replacement therapy before being incarcerated. For those who are prescribed hormones, getting gender-affirming care can be a long, painful application process that can take months or years—in which trans people have to be sent to a series of specialists to diagnose them with gender dysphoria. Some of those physicians will even deny them treatment, as the Houston Press reports. When a transgender woman disclosed to a physician in Texas that she was bisexual, he turned her down—following a series of bizarre questions, like whether she had sex with children.

“For transgender men and women who rely on hormone therapy for both their mental and their physical health, this deprivation can have some serious consequences,” the Houston Press writes. This can include suicide attempts and other acts of self-harm. To fix those issues, they will either be given depression medication, thrown into a psych ward, or locked in solitary.

When solitary was originally instituted in prisons in the 1820s, it was seen as beneficial for inmates, even therapeutic. Correctional officers and wardens, as io9 reports, imagined that “prisoners would spend their entire day alone, mostly within the confines of their cells, ruminating about their crimes while distanced from negative external influences.” Solitary confinement was, thus, seen as a kind of zen center for those who pose a particularly high risk for violent behavior.

In truth, that’s not how solitary operates. As “Orange Is the New Black” points out, Solitary Housing Units are akin to hell on earth—where inmates are denied contact with other people, sleep, material comfort, or almost any form of entertainment. Some inmates may be allowed to have light reading material (Nicky gives Sophia a magazine to peruse), but a television? Forget about it.

The American Psychological Association notes that it’s being used with increasing frequency in recent years, and the sentences are getting longer. A 2013 report from Wired noted that the average inmate is held in solitary confinement for five years, and many of these inmates will be like Sophia, held to keep them out of harm’s way. (The practice is known as “administrative segregation.”) But over a period of years, that isolation and monotony can lead to “anxiety, panic, insomnia, paranoia, aggression and depression,” according to the APA. Many prisoners report having auditory and visual hallucinations or developing severe mental trauma.

The fact is that trans women—more than any other population—remain disproportionately likely to be subjected to these kinds of “preventative measures,” simply because they remain burdened by the gravest miscarriages of justice in the American penal system. Prison officials have no idea what to do with them, and rather than simply listening to what they need, it’s easier to ignore them and shut them away.

Although states like California and Texas have taken steps to amend these issues by providing surgery and hormones, respectively, to those who need them, too many localities lag far behind when it comes to providing the sweeping reforms trans people need.

What Sophia Burset is facing might be unimaginable, but for too many inmates, it’s not. It’s what thousand of trans people have to deal with every single day.