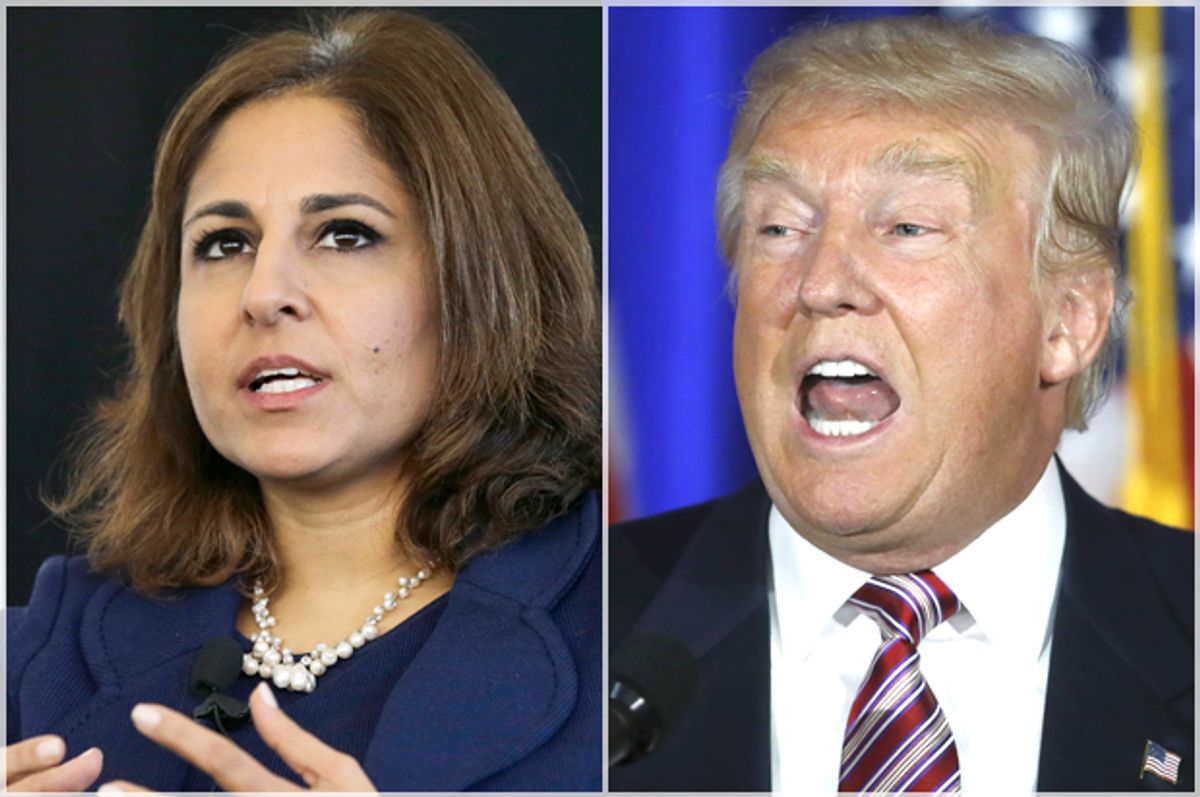 "Unless we take the oil from Libya, I have no interest in Libya," said Donald Trump in an April 2011 interview on CNN's "Newsroom."

The U.S. government was considering military intervention in the oil-rich North African nation at the time. Trump said he would only participate if the U.S. exploited Libya's natural resources in return.

"Libya is only good as far I'm concerned for one thing — this country takes the oil. If we're not taking the oil, no interest," he added.

NATO claimed its U.S.-backed bombing campaign was meant to protect Libyans who were protesting the regime of longtime dictator Muammar Qadhafi. Micah Zenko, a senior fellow at the Council on Foreign Relations, used NATO's own materials to show that this was false.

"In truth, the Libyan intervention was about regime change from the very start," Zenko wrote in an exposé in Foreign Policy in March.

Trump was not the only figure to propose taking Libya's oil in return for bombing it, however. Neera Tanden, the president of the pro-Clinton think tank the Center for American Progress, proposed this same policy a few months after Trump.

"We have a giant deficit. They have a lot of oil," Tanden wrote in an October 2011 email titled "Should Libya pay us back?"

Tanden is a close ally of Hillary Clinton, and is frequently named as a likely chief-of-staff in a Hillary Clinton White House. The Center for American Progress, which Tanden leads, was founded by John Podesta, a key figure in the Clinton machine.

Podesta is the chairman of Hillary's 2016 presidential campaign, and he previously served as chief of staff under President Bill Clinton. With his brother Tony, John also co-founded the Podesta Group, a public affairs firm that has lobbied for the draconian Saudi Arabian regime, among others.

Tanden has expressed hawkish views, although in a statement to Salon she strongly opposed being described as hawkish. The New York Times has described Hillary Clinton as more hawkish than her Republican rivals, although it still endorsed her for president.

Tanden does not comment on international affairs much, but her tweets provide some insight into her hawkish views, which do not reflect the official policy of the Center for American Progress.

In September 2013, when the Obama administration was preparing to bomb Syria, she tweeted support, writing, "On Syria, while I don't want to be the world's policeman, an unpoliced world is dangerous. The US may be the only adult in the room left." Just over a week later, the administration backed off of its plans, in response to enormous backlash — and in fear that it would end up with another Libya on its hands.

During the lead-up to the war in Libya, Tanden expressed support for military intervention. She suggested that Americans should be "chanting" for Qadhafi's ouster.

Days after the NATO operation was launched, she wrote, "To liberal friends worried re Libya, is there better reason 4 use of US power than 2 protect innocent civilians from slaughter by a madman?"

Less than a month later, Tanden conceded, "This whole Libya thing doesn't seem to be working out so well."

Like many liberal figures who supported the NATO bombing of Libya, she stopped talking about the country between 2011 and 2014, while it was roiled by violent chaos and extremism.

These tweets came before the October email in which Tanden suggested taking Libya's oil in return for bombing it. Trump made the same proposal several months before, in April.

After this article was published, Tanden stressed in a statement to Salon that her views do not reflect those of the Center for American Progress, which did not take a position on Libya.

She claimed being labeled "a hawk is a ridiculous caricature," adding, "I opposed the Iraq war from the beginning." Tanden noted that the Center for American Progress "was among the first think tanks to lay out concrete plans for ending the war in Iraq." She also said that she does not support putting U.S. troops in Syria.

"CAP is a think tank," Tanden stressed, referring to the organization by its acronym. "We have internal discussions and dialogues all the time on a variety of issues. We encourage the deliberation of ideas to spur conversation, push thinking and spark debate. We do this in meetings, on phone calls and yes, over e-mail. One internal e-mail exchange among colleagues — which was leaked to another organization — or a few tweets does not constitute a published, official policy position."

Salon never once stated that Tanden's views reflect the Center for American Progress' official policy, but Tanden accused Salon of implying this.

Leftist critics have long lambasted the Democratic Party's militaristic foreign policy, arguing it is not much different than the GOP's. This exploitative idea proposed by both Trump and Tanden lends further credence to the argument that, when it comes to the U.S. empire, the Democratic and Republican parties are much more similar than their adherents make them out to be.

At the time of his April 2011 CNN interview, Trump was considering running as a Republican in the 2012 election. His nationalistic rhetoric then was very consistent to that of today.

Trump lamented that the U.S. was "just not respected" and had become "a laughing stock throughout the world." He hoped that he could reverse this supposed trend, just as he now promises to "make America great again."

Trump's proposal on Libya was consistent with his views on Iraq. He declared at the American Conservative Union’s 40th Conservative Political Action Conference, in 2013, that the U.S. should "take" $1.5 trillion worth of Iraq's oil to pay for the illegal war.

In his presidential campaign today, Trump has made similar proposals. His foreign policy is a strange mix of skeptical non-interventionism and hawkishness.

The rebels had very little to do with Iran. Iran did express support for the opposition to Qadhafi's dictatorship, but it staunchly opposed Western military intervention, which it warned was hypocritical, neocolonial in nature and motivated by Libya's large oil reserves.

By no means were all of the rebels extremists, but there were al-Qaeda-linked elements in the opposition to Qadhafi. Human rights groups documented atrocities committed by extremist rebels, including ethnic cleansing of black Libyans.

After the NATO war toppled Qadhafi, the country was thrown into chaos. Rivaled forces, including extremist groups such as Ansar al-Sharia and eventually ISIS, seized control of swaths of the country, and weapons from Qadhafi's enormous cache ended up in the hands of extremist groups throughout the region. To this day, large parts of Libya are not under the control of the internationally recognized government.

Hillary Clinton played the leading role in rallying up U.S. support for the NATO war. Reports have since shown that the Pentagon was skeptical of U.S. involvement at the time, but, under the leadership of Secretary of State Clinton, the Obama administration portrayed it as a humanitarian mission.

Micah Zenko, the Council on Foreign Relations scholar, showed this to be false. "This is scarcely believable," Zenko rejoined in his detailed report. "Given that decapitation strikes against Qaddafi were employed early and often, there almost certainly was a decision by the civilian heads of government of the NATO coalition to 'take him out' from the very beginning of the intervention."

"The threat posed by the Libyan regime’s military and paramilitary forces to civilian-populated areas was diminished by NATO airstrikes and rebel ground movements within the first 10 days," he explained. "Afterward, NATO began providing direct close-air support for advancing rebel forces by attacking government troops that were actually in retreat and had abandoned their vehicles." The military intervention continued for more than seven months.

Rebel forces went on to brutally murder Qadhafi, sodomizing him with a bayonet. When then-Sec. Clinton heard that he had been killed, she rejoiced in front of TV cameras, joking, "We came, we saw, he died!"

In April, Obama singled out U.S. support for the NATO war in Libya as the worst decision of his presidency.

Zenko warned that the "intervention in Libya shows that the slippery slope of allegedly limited interventions is most steep when there’s a significant gap between what policymakers say their objectives are and the orders they issue for the battlefield."

"Unfortunately, duplicity of this sort is a common practice in the U.S. military," he added.

Interestingly, Trump himself cautioned in an interview on Fox News' "Fox & Friends" in March 2011 that U.S. intervention in Syria would be a "slippery slope."

"It is a slippery slope and more and more, you realize that we're over there fighting wars to open up these governments and they would have opened up themselves," Trump said, expressing skepticism about U.S. military involvement very early on in the war.

Clinton called for the exact opposite in Syria. She would go on to oppose diplomacy and insist the U.S. should support the "hard men with the guns."

A hacker broke into the computer network of the DNC and leaked its opposition research on Trump. A 210-page document that appears to be this report highlights Trump's past remarks on Libya, Syria, Iraq and more.

Also revealed in the report is that Trump bragged that he "screwed" Muammar Qadhafi with an unfair business deal.

U.S. media outlets immediately blamed the DNC hack on the Russian government. Soon after, however, they quietly backed away from the hasty conclusions they made based on what progressive media watchdog Fairness in Accuracy and Reporting pointed out was incredibly flimsy evidence.

(This article was updated after it was published with a statement from Tanden.)