He still has work to do: Sanders’ message has been consistently about creating a movement that goes beyond 2016 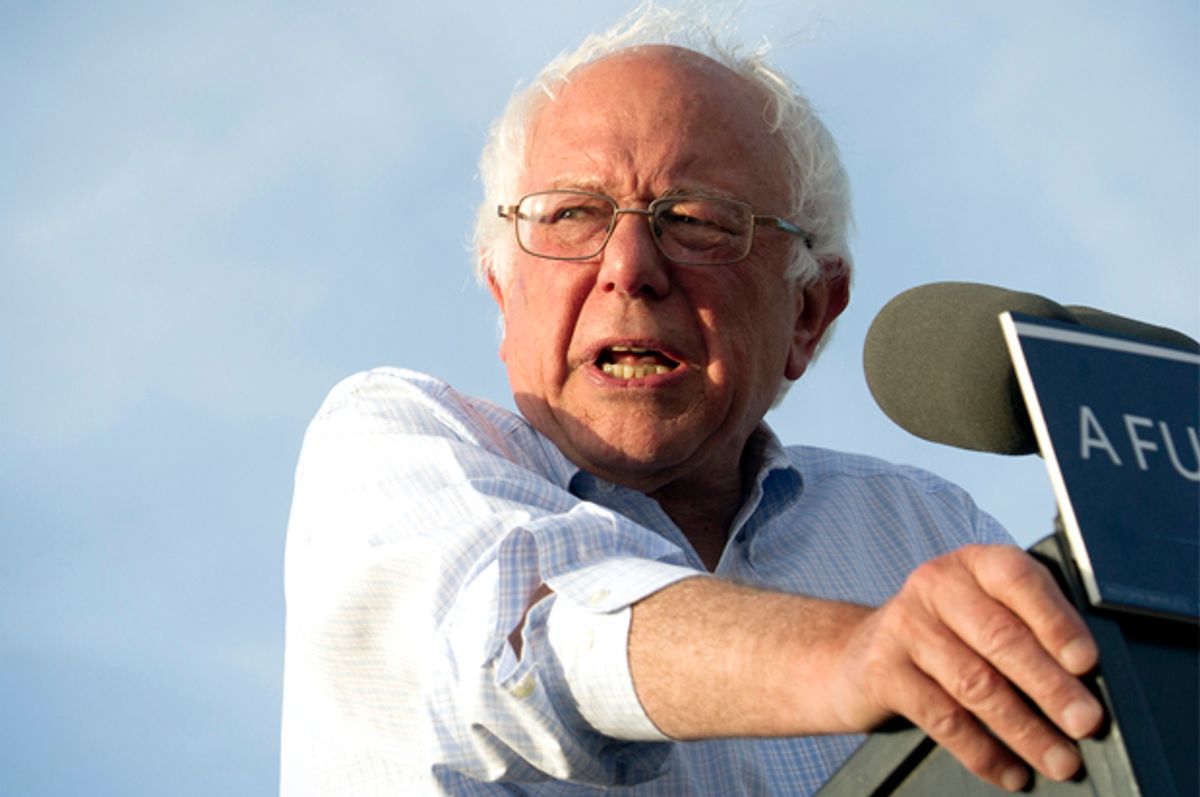 On Thursday, Sen. Bernie Sanders gave an online address to discuss the future of his campaign, the 2016 presidential election, and the so-called “political revolution” that he has been calling for over the past year. For many in the Democratic establishment, Sanders’ speech was a great disappointment, and for an obvious reason: he didn’t drop out and concede to Hillary Clinton, who was declared the presumptive Democratic nominee one week earlier by the Associated Press. Instead, the Vermont Senator promised to carry on and keep fighting for far-reaching progressive change in America.

“Election days come and go. But political and social revolutions that attempt to transform our society never end,” remarked Sanders. “The major political task that we face in the next five months is to make certain that Donald Trump is defeated and defeated badly. And I personally intend to begin my role in that process in a very short period of time. But defeating Donald Trump cannot be our only goal. We must continue our grassroots efforts to create the America that we know we can become.”

Sanders, who has been a progressive gadfly throughout his long political career, is not about to capitulate to the Democratic establishment — nor should he. The senator is not an ordinary politician and this hasn’t been an ordinary political campaign; since launching it roughly a year ago, Sanders’ message has been consistently about creating a popular movement that goes beyond election year. Unsurprisingly, this kind of thinking baffles many partisan Democrats who view American politics through a two-party prism, where everything comes down to Republican versus Democrat and third-party candidates are generally regarded as irritating (and for some, treacherous) spoilers.

In recent weeks, this bewilderment has been on display as disgruntled Clinton supporters have accused Sanders of being everything from a power-hungry egoist (which is rich coming from Clintonites) to a sexist who can’t concede to a woman to a deranged conspiracy theorist unable to face reality. The possibility that Sanders means what he says when he talks about popular movements and a “political revolution” seems inconceivable to these folks, who subscribe to a brand of politics that Princeton University assistant professor Matt Karp has called “fortress liberalism” in his Jacobin essay “Against Fortress Liberalism.”

“In this view right-wing opposition is not to be dislodged, let alone defeated,” writes Karp. “At best, it is to be resisted from within the walls of the Democratic Party fortress known as the White House. ‘The next Democratic presidential term will be mostly defensive,’ writes Jonathan Chait — no more or less than a 'bulwark' against Republican extremism in Congress... Seldom do establishment Democrats stop to consider whether this negative mentality — both disturbingly complacent and profoundly uninspiring — has contributed to the steady evisceration of the party at the state level.”

Sanders rejects fortress liberalism, while Clinton — who has described herself as “kinda moderate and center” — will in all likelihood be running her presidential campaign on a platform of fortress liberalism and what author Thomas Frank described as “militant complacency” in a recent editorial. In other words, Clinton will be campaigning as the lesser-evil candidate against the sexist, xenophobic, and Islamophobic demagogue that is Donald Trump; and considering the sheer toxicity of Donald (according to a recent Washington Post/ABC News poll, 70 percent of Americans have an unfavorable opinion of the billionaire), this will probably be enough to win in November. But it certainly won’t increase voter turnout or lessen the political discontent that has become so widespread. And it won’t bring about the kind of sweeping reform that the Sanders campaign has advocated.

Clinton’s 2016 rhetoric has been largely about protecting Obama’s legacy from extremist Republicans and promoting incremental and modest change from the very top of the political pyramid. Once in the White House citadel, Clinton will continue defending Obama’s centrist legacy, while working tirelessly to appease the special interests and big donors that contributed to her campaign (and charity organization?).

The socialist has made it very clear that none of the policies that he has laid out will ever come to fruition as long as the population remains politically apathetic and docile. And because of this, Democratic partisans and most of the commentariat have criticized his entire platform as pie-in-the-sky idealism that will never happen.

On the clashing views of political change, Karp continues in his Jacobin essay: “Mass politics just does not compute with the professional-class worldview that suffuses today’s Democratic Party. For liberal elites, effective political struggle is something that happens inside committee rooms, not at strikes, rallies, or protests. (The Clinton campaign itself embodies this vision of the world, where politics means deal-making and democracy means voting — nothing less and nothing more.)... Unlike fortress liberals or professional elites, Sanders and his young backers recognize that the vital element in any progressive struggle is the ability to generate energy from the bottom up.”

Since the 1980s, with the rise of the Clintons and the “New Democrats,” the Democratic party has adopted neoliberal politics and a meritocratic dogma that has resonated with the professional class. It is inherently elitist, and essentially conservative. Indeed, given the fact that Trump is a reactionary populist, Clinton will be the true conservative choice for the 2016 presidential election. The former Secretary of State ultimately wants to conserve the neoliberal status quo and protect the centrist, corporate-friendly policies of Obama (many of her positions — particularly in the foreign policy realm — are well to the president’s right). It seems Clinton has aways been, in her heart of hearts, a classical conservative; as she said in a revealing 1996 interview with NPR:

“I feel like my political beliefs are rooted in the conservatism that I was raised with. I don’t recognize this new brand of Republicanism that is afoot now, which I consider to be very reactionary, not conservative in many respects. I am very proud that I was a Goldwater girl.”

In the two decades that followed this interview, the GOP has become even more reactionary, while the Democrats have in many respects become America’s conservative party.

Thus, there must be a sustained, non-partisan popular movement from below that rejects both the right-wing radicalism of Trump and the conservative “fortress liberalism” and “militant complacency” of Clinton. Sanders is still running for president; not because of his ego or his inability to admit defeat, but because the Democratic party has become self-satisfied and complacent, and has largely abandoned the egalitarian ideals that FDR laid out in his Second Bill of Rights. For Sanders, principles come before party loyalty, and if the Democratic party refuses to embrace true progressive politics, the political revolution must find or create a party that will.