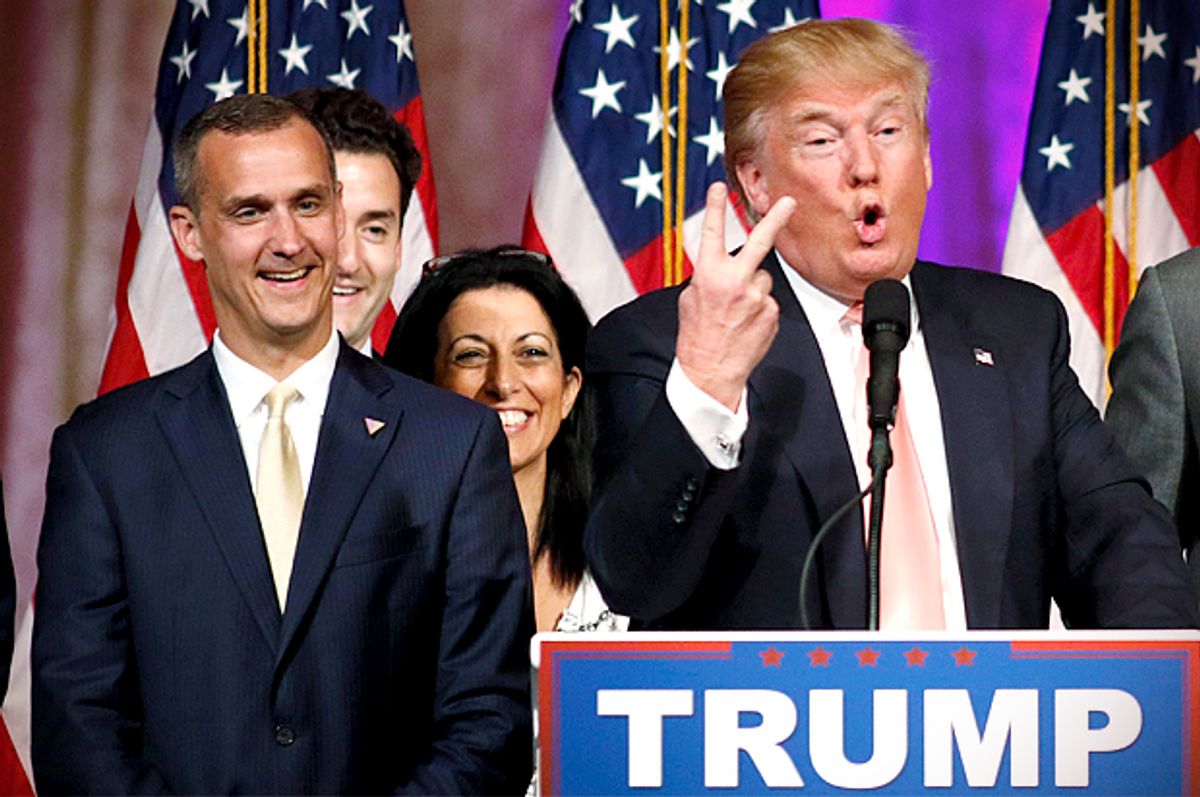 Donald Trump's most visible campaign adviser, Corey Lewandowski was fired Monday. You might recall how Lewandowski, who had been previously demoted to nothing more than a body man for Trump, manhandled a former Breitbart reporter. Lewandowski and Trump emphatically denied the charges, even though video of the fracas showed Lewandowski clearly grabbing and shoving the reporter. It was one of a long series of trespasses against journalists by the clown-haired GOP nominee who, most recently, revoked The Washington Post’s press credentials.

Fast forward to Monday when Hope Hicks, a spokeswoman from the campaign, revealed that Lewandowski had been sacked as the campaign adjusts to a general election footing. Talking Points Memo reported:

“The Donald J. Trump Campaign for President, which has set a historic record in the Republican Primary having received almost 14 million votes, has today announced that Corey Lewandowski will no longer be working with the campaign,” Hicks said in the statement. “The campaign is grateful to Corey for his hard work and dedication and we wish him the best in the future.”

New York magazine reported that Trump's children, Ivanka, Eric, and Donald Jr., were the driving forces behind the firing.

As if that's not bad enough, Josh Marshall observed that Trump's campaign is very close to running out of money. With a few weeks to go before the convention, Trump is apparently running a national campaign with just $2.4 million and falling. Comparatively, Hillary Clinton has about $30 million in the bank, and this following a contentious primary campaign that Bernie Sanders supporters will tell you is still raging onward.

Furthermore, news broke on Friday that GOP delegates are planning to defect from Trump during the convention in favor of another less clownish nominee. This following a cavalcade of Republicans who are rushing to either avoid commenting on Trump or to un-endorse him, which is exactly what Mark Kirk did, followed by Lindsey Graham who encouraged other colleagues to do the same.

Of course, the real crisis within the Trump campaign can't be ameliorated with a firing or a reorganization. The real problem with the campaign is Trump himself who, regardless of the names on his tiny roster of staffers, ultimately does his own thing, and it's an unmitigated nightmare for the Republicans.

The centerpiece of the Trump existential crisis is that he's a one-note candidate. He's a professional Twitter troll who speaks in superlatives and recess-bully insults and pundit-style horserace poll jockeying (mainly about his own polls). His policies essentially involve Trump saying he'd be "very, very" good at everything -- that he'd be a "tremendous" president who, childishly enough, boasts that he "has the best words." (Congratulations on graduating from kindergarten this month, Mr. Trump.) He's gained a relatively dinky following by tapping into the derangement syndrome of white Fox News bubblenauts who are fed up with enduring an evil black president who's responsible for [insert list of wacky conspiracy theories and debunked scandals here].

Somehow, Trump and his inner circle believe their guy can turn his fortunes around by firing Lewandowski, who, frankly, is the least of Trump's problems.

Apart from being a one-note fire-eater, Trump's biggest strategic flaw is that it's impossible for him to shift gears. It's even more impossible for Trump to take measures to pull himself out of one or more tight spots. Historically, most winning candidates possessed the political agility to inject a game-changing move into their strategy to cauterize the hemorrhaging. During the 2008 primary season, Barack Obama was being hammered by the endless-loop replays of the Reverend Wright videos. It threatened to doom his rising fortunes until Obama delivered what might've been the most masterful political speech in modern presidential history, up to that point. Titled "A More Perfect Union," it effectively put the racial issue to bed, at least temporarily. Earlier during the same campaign, Hillary Clinton tapped into her emotional side in the lead-up to New Hampshire and pulled out an upset victory over Obama. Mitt Romney, in 2012, delivered a slick performance in the first debate against President Obama and, for a brief moment, it appeared as if Romney might overtake the president.

These are things Trump is incapable of achieving.

Again, from what we've observed over the last 12 months, Trump simply can't make top-shelf adjustments in order to change his fortunes for the better. He doesn't have any game-changers up his sleeves -- especially in terms of his normally inflammatory rhetoric. Therefore, it's entirely likely that Trump will continue to blurt offensive things that'd make the most hard-lined Fox News conservatives suffer from nearly volcanic Albert Brooks-level flopsweats. The odds of Trump suddenly snapping his dwarfish fingers and magically becoming presidential are practically nonexistent. It's not within his DNA to behave himself. We can rest assured knowing that his menu of controversially stupid remarks will continue uninterrupted.

And now, the caveat. One of the many lessons I learned while working in talk radio was, simply put, "Don't get happy." It was the prime directive against the evils of complacency -- implanted in my brain by Don Geronimo, Mike O'Meara and Buzz Burbank, the legendary Washington, DC radio guys I grew up listening to and for whom I was an intern and production assistant during college.

It makes sense on numerous levels, but recently, in the context of the presidential election, there's significant wisdom in these three words. Everything seems to be pointing in the direction of a Hillary electoral landslide over Trump, and, therefore, it's possible and, indeed, likely, that Democratic voters will get too happy and blow the whole damn thing. One of the many unnerving aspect of American politics is that the left is notoriously complacent and will often stay home when it looks as if the election is a sure thing. See also the Michigan primary, when Hillary voters, believing the nomination was in the bag, stayed home or switched over to vote against Trump. Bernie ended up winning a major upset. It can absolutely happen again.

Yes, Trump might be imploding right now, but no matter how difficult it might be to curb your enthusiasm... don't get happy.