Many countries are weighing cash payments to citizens. Could it work in the U.S.?

A case study for universal basic income in the U.S has quietly been underway for 20 years — results are promising 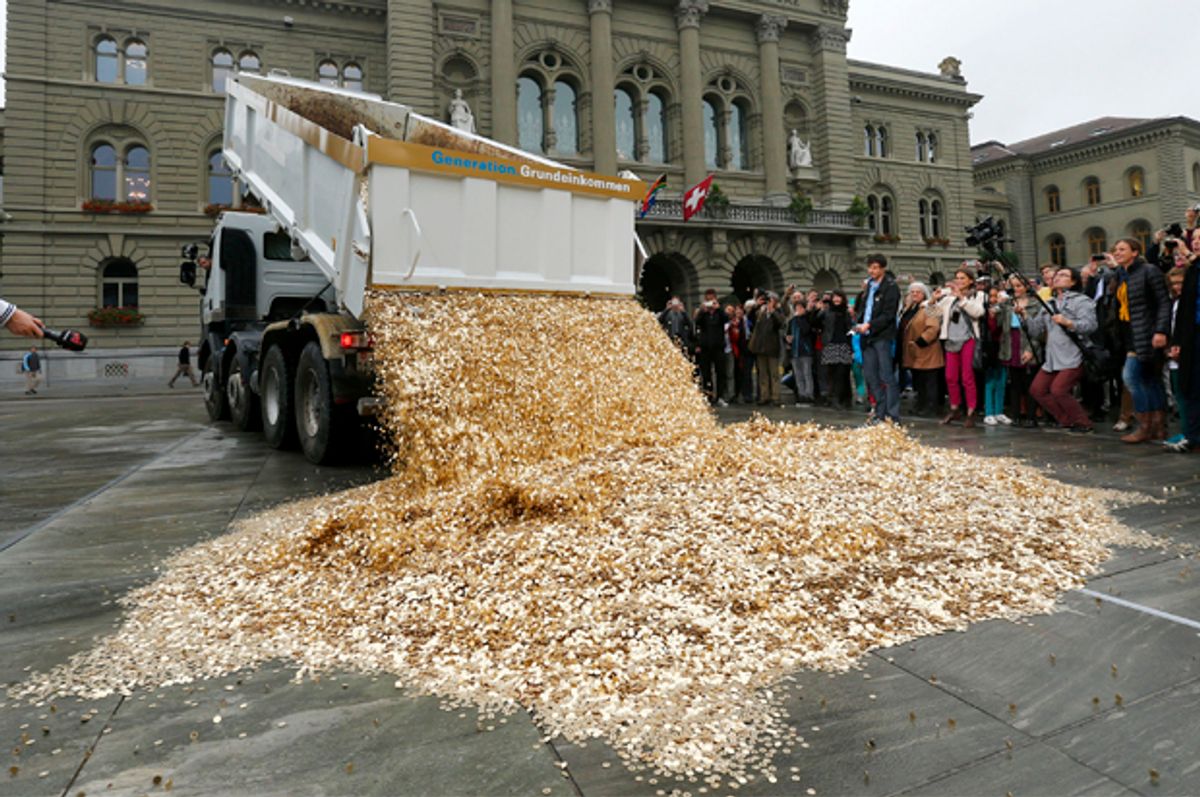 A truck dumps coins onto Federal Square in Bern, Switzerland, during a an event organized by the Committee for the initiative "CHF 2,500 monthly for everyone," October 4, 2013. (Reuters/Denis Balibouse)
--

What if we all had a basic income whether or not we had lost our job, or worked at an “unpaid” job like raising kids?  With the advent of robotized factories and driverless vehicles, many safe jobs today will be gone tomorrow, creating the specter of chronic unemployment for millions. There has been much discussion in some countries recently about providing everyone with a universal basic income to help reduce the pain that comes with “creative disruption” in the workplace. The referendum recently defeated in Switzerland was one of several serious examinations of the question. Now Finland plans to introduce a basic income pilot program in 2017, and similar measures are being considered in France and the Netherlands. Even in the U.S., there’s precedent for the notion: President Nixon once proposed a “guaranteed minimum income.”

There are the obvious advantages to replacing a nightmare spiders-web of income support programs with a simple universal safety net. On the other hand, people worry about the “moral hazard” of handing out money that some might use to slide out of working. Would a universal basic income make families and the economy stronger? Or would it encourage laziness?

In science, the “gold standard” for answering such questions is a randomized controlled trial. Such an experiment would assign some families, but not others, chosen at random, to receive the basic income. We would then observe the effects on work, income, health and use of public resources such as courts and prisons. You can imagine how hard it would be to get ethical approval for such an experiment. But sometimes experiments quite like this do happen, by chance.

For the past 20 years, one such experiment has quietly been going on in North Carolina. The Eastern Band of Cherokee Indians have a land trust, the Qualla Boundary, which straddles parts of Swain and Jackson counties in the Smoky Mountains, in the western part of the state. In the mid-1990s, they greatly expanded the gambling facilities on the Boundary to include a large casino. Some of the profits from the casino are ploughed back into the tribal community in the form of community services --roads and sewers, hospitals and clinics, gymnasia and schools. But some of the money goes straight back to the individual tribal members in the form of a payment every six months, the amount dependent on the profits from the casino. The “per cap”, as it is called, goes to everyone, young or old, healthy or sick, working or unemployed, law-abiding or not, as long as they are members of the tribe. (Money for children goes into a bank account for them until they graduate high school or reach age 21, whichever comes first.) In recent years the amount of the supplement has been around $4,000 a year.

The “experiment” part of the story happened purely by chance. In 1993 my Duke University colleagues and I began a study of the mental health care needs of 1,420 randomly selected children living in the 11 western-most counties of North Carolina. We were especially interested in the American Indian community, because it provided strong access to mental health care. So we ensured that a quarter of the study sample were American Indian children – 350 of them.

After the study had been running for 4 years the casino opened, but we researchers hardly noticed. Another four years passed and we suddenly woke up to the fact that an important experiment had been going on under our noses: All of the American Indian children in the study, but none of the children in the surrounding counties, lived in families that had received a considerable boost in income.

As we dug into the data, we discovered several intriguing things. Four years after the casino opened, Indian children had fewer behavioral and emotional problems than did neighboring children. Moreover, the effect continued into adulthood. At age 30, one in five of the American Indians had mental health or drug problems, compared with one in three of those in surrounding communities. The Indians had less depression, anxiety and alcohol dependence. The payments had no effect on extremely severe but rare mental illnesses like schizophrenia and bipolar disorder. But those who had received the supplement had better overall health and fewer economic problems. The younger the participants were when their families started getting the casino payments, the stronger the effects on adult mental health.

So does “free money” breed feckless adults? Well, so far our study provides no evidence that it does. Of course, some individuals spent their extra money foolishly, on drugs and drink, just as was true outside the reservation. Most people used their income supplement wisely, however, and there was no evidence that people worked fewer hours. And, of course, it is much cheaper to give people a check than to administer all the complex means tests that go with government welfare programs such as Supplementary Security Income benefits.

Jane Costello is a professor of medical psychology in the Duke University Department of Psychiatry and Behavioral Science and associate director of research at the Duke Center for Child and Family Policy. She studies child mental health, child development and gene-environment interaction.