WATCH: Elizabeth Warren reveals the "one lie that helps sum up what Donald Trump is all about" 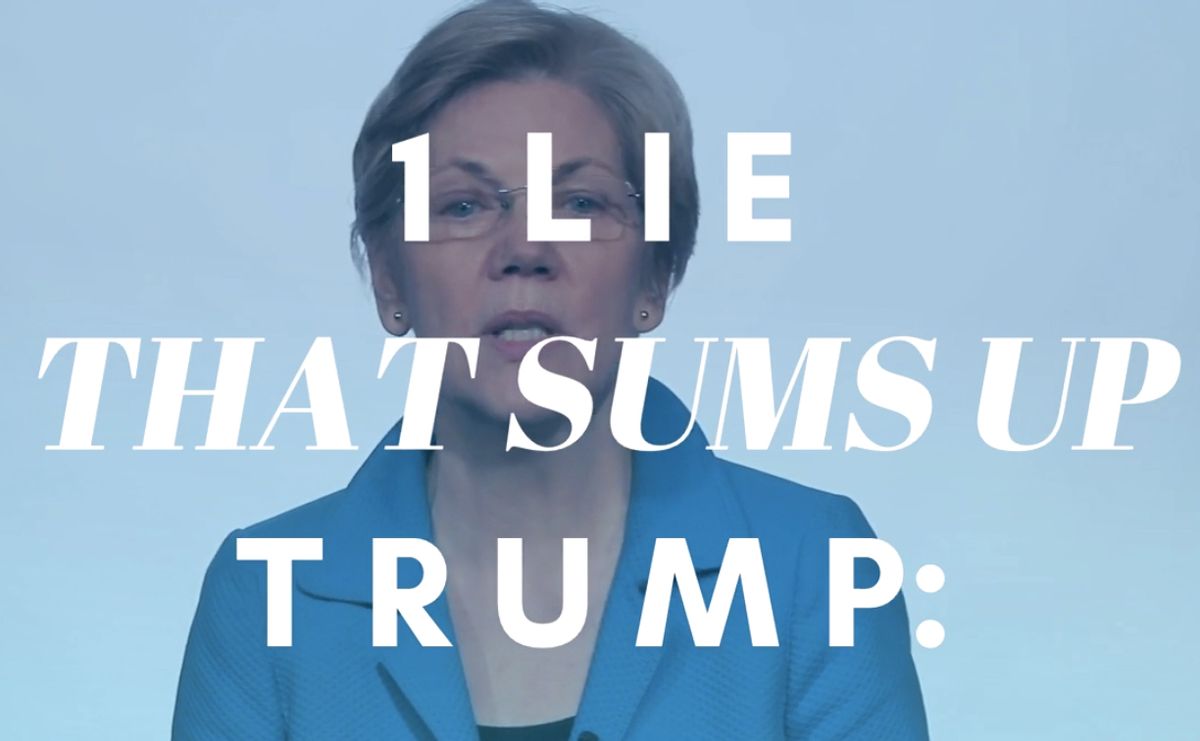 In a new video released on Wednesday, Massachusetts Senator Elizabeth Warren tore into Donald Trump and revealed the "one lie that helps sums up" what he is all about.

"I have to be honest: It’s hard to talk about Donald Trump," Warren admitted to open the four-minute video released by MoveOn on Tuesday. "Between his ignorance, racism, sexism, lies—it’s hard to know where to start."

But harkening to the message of Americans "paying their fair share" that catapulted her to national prominence, Warren said, "today I want to focus on one lie that helps sum up what Donald Trump is all about: his taxes.”

The popular progressive who has ramped up her attacks on the presumptive Republican presidential nominee in recent weeks, repeatedly insisting he will never be president of the United States, then laid into Trump's continued avoidance of releasing his tax returns -- an issue Democratic rival Hillary Clinton also mentioned in a speech targeting Trump Tuesday:

We don't know what Trump pays in taxes because he is the first Presidential nominee in 40 years to refuse to disclose his tax returns. Maybe he’s just a lousy businessman who doesn’t want you to find out that he’s worth a lot less money than he claims—we can’t know for sure. But, here's what we do know. The last time his taxes were made public, Donald Trump paid nothing in federal taxes—ZERO. Zero taxes before, and for all we know he’s paying zero taxes today. And he’s proud of it. A few weeks ago he said he’s more than happy to dodge taxes because he doesn’t want to throw his money “down the drain.”

The video, like a similar one released by the Clinton campaign earlier in the day, also featured the words of prominent Republicans hitting Trump over his refusal to release his tax returns.

Warren, who the New York Times reported over the weekend has shot to the top of Clinton's vice presidential shortlist as her attacks on Trump have grown more forceful and frequent, went after the businessman as "a fraud and a cheapskate." "He inherited a fortune from his father," Warren said of Trump's claims of unsubstantiated wealth, "and kept it going by scamming people, declaring bankruptcy, and skipping out on what he owed."

Predicting and then quickly dismissing the inevitable Trump attacks to come, Warren urged viewers to demand that the candidate release his tax returns and spread the news about his refusal to anyone who will listen -- "even your Fox News-loving Republican uncle":

Watch below via MoveOn: