The GOP nominee is a warmongering misogynist in constant need of attention. Sounds like a character from the Bible 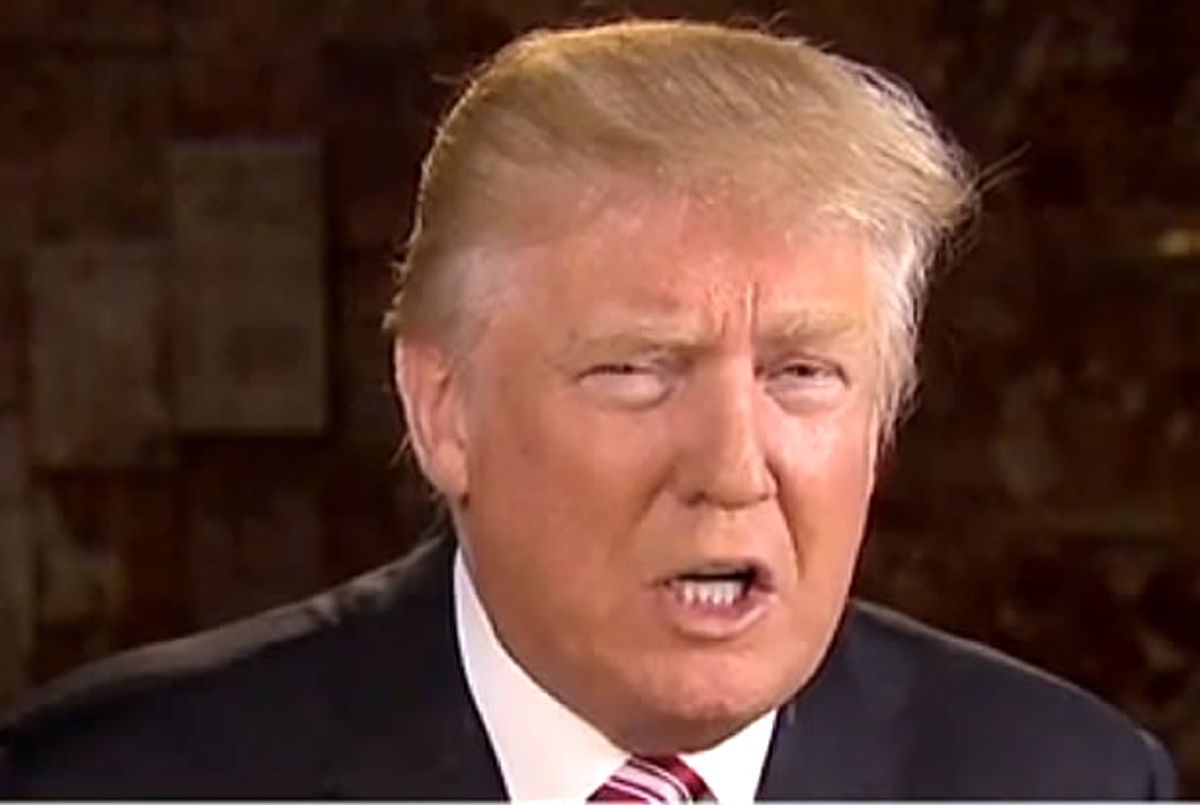 People have been scratching their heads about how so many "family values" American voters who claim to love Jesus can follow Donald Trump. What ever happened to love thy neighbor, and if you have two coats give one to the poor, and turn the other cheek, and feed my lambs, and the meek shall inherit the Earth? Some horrified Christian leaders have gone so far as to say a person can’t be a Christian and a Trump supporter.

Of course, times are hard, and in fairness, fear and downward mobility do weird things to some people, including Christians. And some folks, whether Christian or not, are congenitally horrid. But shouldn’t Bible belief inoculate earnest believers against someone who seems like the polar opposite of Jesus?

Perhaps the problem is that Trump is a lot like a different Bible character—one who also is the polar opposite of Jesus in many ways, but whom young believers are nevertheless taught to worship and praise. I’m talking about the character of Jehovah; Yahweh as some people call him; the Great I Am; the LORD God of the Old Testament who makes it into the New Testament as both the father of Jesus and his alter-ego, and later into the Quran.

One way biblical literalism screws with people’s heads is this: Children are taught from a young age that God is perfect—the essence of Love and Truth. But when you look a little closer at the stories in the Bible, it turns out he’s an awful lot like Trump.

He is powerful, and He wants us all to know it. Isaiah 45 is just one of many egomaniacal diatribes about God’s unparalleled power and contempt for humanity, as if the force that created the DNA code and supernovas would need to brag and posture and lord it over lowly bipedal primates. It contains the word “I” 22 times, as in:

He’s an insatiable attention seeker. From Genesis through Revelation, the Bible lays out precisely how people should grovel and sing God’s praises and otherwise kiss up. God wants his adoring followers to beg for things he already knows they need. He loves the smell of burnt offerings and dictates just what should be burnt and when. He demands proof of loyalty, like cutting off the cover of your penis, or whacking relatives who don’t think he’s awesome, or being willing to turn your child into a human sacrifice.

And he doesn’t like it at all if anyone pays attention to competing deities. “Thou shalt worship no other god!” he roars, “For the LORD, whose name is Jealous, is a jealous God!”

He issues two sets of 10 Commandments, one of which contains nothing but details of how to pay him homage. The other, better known set includes some basic, universal ethical principles—but even there, four out of 10 are about giving the Big Man the kind of exclusive adoration he wants. That’s why there was no room for Wash your hands after you go to the bathroom. Or Don’t have sex with anyone who doesn’t want to. Or Treat other living beings like they want to be treated. Or Thou shalt not own other human beings.

He’s mean. The internet abounds with articles, sermons and videos assuring us that the Bible-god isn’t really the embodiment of mean people suck. But what exactly would you call sending a bear to tear apart 42 boys who tease a prophet? Or slaughtering a son in each Egyptian peasant family and blaming the mass murder on their unelected ruler who is actually your puppet: “The Lord said to Moses, ‘Pharaoh will not listen to you, in order that my wonders may be multiplied in the land of Egypt.’ Moses and Aaron performed all these wonders before Pharaoh; but the Lord hardened Pharaoh’s heart, and he did not let the people of Israel go out of his land.” (Exodus 11:9)

Or let’s go back to the very first Bible story. What would you call putting a tantalizing fruit tree in front of two naïve and inexperienced creatures you’ve just made out of dirt and then punishing them brutally when they eat from it? (Genesis 2-3). Not long ago, an Alabama pastor wanted to teach a lesson about Christian obedience so he starved his chained-up dog for two days and then put food in reach but told the dog not to eat.
Yeah, sadistic. Sometimes Christians reveal a little more than intended about the deity they worship.

He’s racist and prejudiced. God may claim credit for making us all, but that doesn’t prevent him from picking favorites or finding some people repugnant simply by accident of birth. The Old Testament narratives are about favored blood lines, whites—I mean Hebrews—who get the right to claim land already occupied by other ethnic groups. According to God’s rules, even slaves must be treated better if they are Hebrew slaves.

But being Hebrew won’t help if you’re handicapped. Jehovah, like Trump thinks that arthrogryposis is just gross. Stay away! “No one of your offspring throughout their generations who has a blemish may approach to offer the food of his God. For no one who has a blemish shall draw near, one who is blind or lame, or one who has a mutilated face or a limb too long, or one who has a broken foot or a broken hand, or a hunchback, or a dwarf, or a man with a blemish in his eyes or an itching disease or scabs or crushed testicles.” (Leviticus 21:17-21)

He demeans women. If a guy with crushed balls might contaminate Jehovah’s inner sanctum, a menstruating woman would be far worse. Whatever you do, don’t let Megyn Kelly sit on the furniture! And by the way, a woman who gives birth to a girl baby is nasty for twice as long as one who gives birth to a boy. But don’t get too insulted. Women can be saved through childbearing.

Donald Trump may treat women like trophies, but Jehovah literally defines women as economic assets belonging to men—just like slaves, children and cattle, which is where the word chattel comes from. He actually sets up formal guidelines for sexual slavery. As chattel, a female who voluntarily gives up her virginity (thus reducing her economic value) can be stoned, but a rapist must simply buy the damaged goods. If a man suspects his wife of infidelity (again reducing her ability to produce purebred offspring of known origin), he can forcibly give her an abortion potion. Never say Jehovah is anything less than a bro.

(See also Fifteen Bible Texts Reveal Why God’s Own Party Keeps Degrading Women. Or, don’t take it from me, take it from Christian leaders themselves: Twenty Vile Quotes Against Women By Church Leaders from St. Augustine to Pat Robertson.)

He’s bellicose and vindictive. Lists of Jehovah’s enemies and stories about how he ruins their lives or plans to ruin their afterlives occupy much of the Bible. First there’s Satan and all of those uppity angels who have apparently gotten tired of acting like everlasting groupies. Then come giants and people who build the Tower of Babel, which threatens to break through to God’s home above the sky.

Then comes everybody but Noah and his ark-building sons, and then the inhabitants of Sodom and Gomorrah, and the Midianites and Amalekites and the Philistines (other Semitic tribes), and the Assyrians and Babylonians, and a long litany of foreign kings and queens like Nebuchadnezzar and Jezebel. And let’s not forget all of the traitors among his Chosen People, who—despite constant displays of divine temper and butchery—never seem to grasp how badly Jehovah will burn them if they fall down on sucking up. Unable to threaten lawsuits like Trump can now, Jehovah instead threatens all who displease him with eternal torture.

His statements contradict facts and each other. Unless the Bible writers got things garbled, Jehovah’s claims are wildly contradictory. Jehovah says he created evil, and also says he can’t look on it. He shows up, then says no one has ever seen him (Exodus 33:11/John 1:18). He tempts people to do bad things, then denies having ever done so (Genesis 22:1/James 1:13). He declares himself unchanging but changes his mind at will (Exodus 32:14/Psalm 105:25-27). He apparently can’t remember if he created animals before humans or vice versa, so boldly tells the story both ways (Genesis 1 & 2).

Add to the contradictions a surreal layer of ignorance.
Jehovah’s official biography is full of scientific hogwash. He creates day and night before the sun. He makes the sun stand still as a favor to some Iron Age fans—meaning he somehow stops the earth’s rotation without everything flying off the planet. He covers Mt. Everest in a flood which then dries up. He assumes that pi equals three. He predicts that a star will fall to earth. He warns against eating four-legged insects (which don’t exist). In sum, despite his claim to have created the world, he doesn’t have a freaking clue how it works.

But that’s OK, because all that really matters is ...

He’s wildly rich, and he promises to make you rich too if you follow him. Jehovah’s version of heaven, which sounds rather hellish if you actually think about it for more than five seconds, perfectly sums up Jehovah as the protagonist of his own story. It’s a place of conspicuous opulence with streets of gold and gem-encrusted walls where everyone gets their own mansion. But these trappings of wealth are on offer only to those who are willing to spend a literal eternity standing around singing about what an awesome god he is. This, according to many Christians, is the pinnacle of human existence. And if you don’t find that appealing—it’s outer darkness for you, baby. Wailing and gnashing of teeth.

You can see why someone primed on Jehovah might admire a bully with an almost limitless sense of his own importance, who demands constant admiration, has an enemy list a mile long, and shows a perverse lack of empathy for those he perceives as lesser beings. These classic characteristics of narcissistic personality disorder are the reason we often refer to a narcissist as someone with a god-complex. Most of humanity’s gods are assholes, and the Bible-god is no exception.

Biologist Richard Dawkins once summed up Jehovah in a sentence: “The God of the Old Testament is arguably the most unpleasant character in all fiction: jealous and proud of it; a petty, unjust, unforgiving control-freak; a vindictive, bloodthirsty ethnic cleanser; a misogynistic, homophobic, racist, infanticidal, genocidal, filicidal, pestilential, megalomaniacal, sadomasochistic, capriciously malevolent bully.”

Christians may make the head-spinning claim that Jehovah is a stand-up guy, goodness incarnate, and worthy to be worshiped by all of humanity, but he makes Donald Trump look morally intact. To the best of my knowledge Trump has no history of infanticide, genocide, filicide, or ethnic cleansing. Despite his god complex, Trump is a pale shadow of the Great I Am.

Even so, from an electoral standpoint, Trump’s likeness to Jehovah may be as valuable as his celebrity name. If Trump manages to get himself elected by Evangelicals looking for streets of gold and old white males who think they are the Chosen People, we may all be grateful that the worst he can do is build a big wall or nuke the Middle East rather than drowning the entire planet in a flood that covers Everest.