Fact-checking Trump's garbage truck of lies: His speech accusing Clinton of corruption is riddled with fiction and conspiracies

Trump tried to paint Clinton as dishonest, but instead repeatedly revealed his own aversion to even basic facts 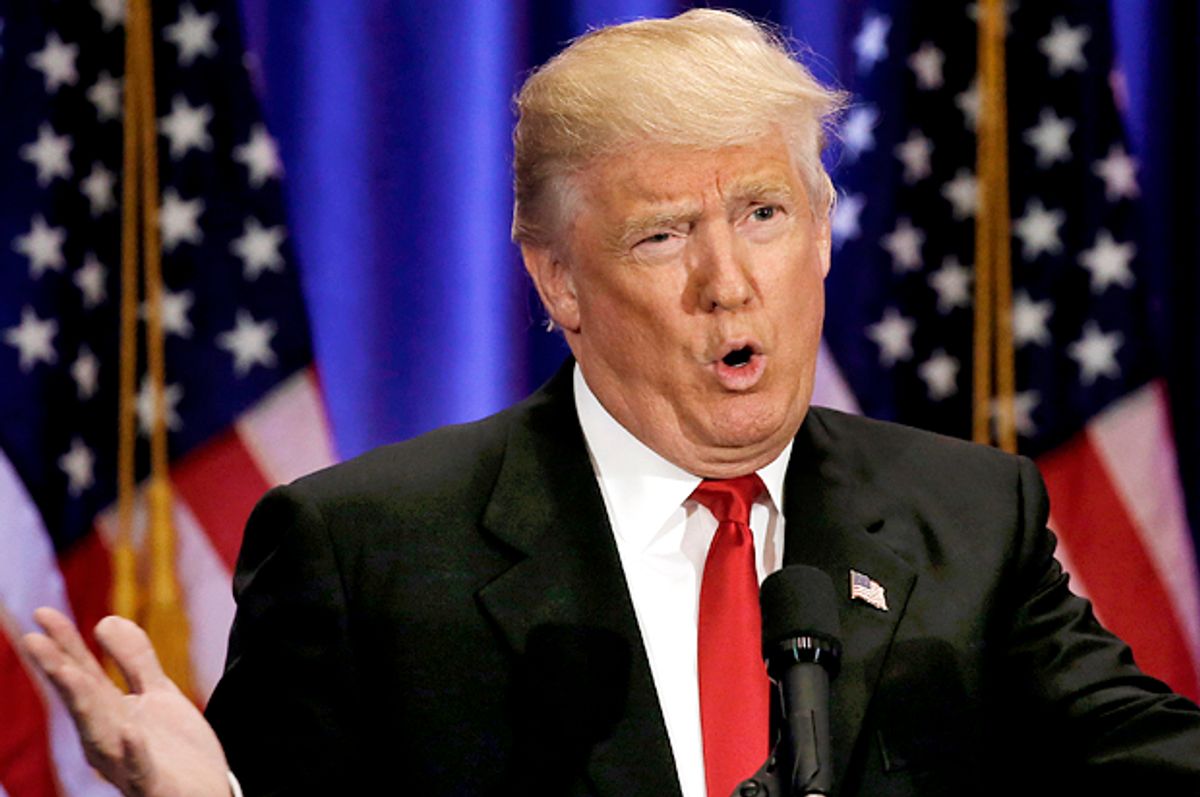 Donald Trump's long-awaited speech Wednesday supposedly detailing the dirt he has on Hillary Clinton turned out to be exactly what critics expected: A diatribe of right-wing paranoia seemingly cribbed off all-caps email forwards sent to you by your grandfather. Much of it assumed an audience that already has spent years poring over anti-Clinton urban legends and that gets almost all its news from the Drudge Report.

It is also a fact-checking nightmare, a garbage truck of lies, misinformation, and conspiracy theories. It's as if Trump is trying to overwhelm the fact-checkers with so many lies they simply give up. Indeed, it's impossible to really deal with all of it, but I went over the speech and checked some of the most prominent claims in it against the public record.

Claim: "Hillary Clinton who, as most people know, is a world-class liar...."

Fact: "As for her statements on issues, Politifact, a Pulitzer prize-winning fact-checking organization, gives Clinton the best truth-telling record of any of the 2016 presidential candidates," Jill Abramson, writing for the Guardian, explained earlier this year. "She beats Sanders and Kasich and crushes Cruz and Trump, who has the biggest “pants on fire” rating and has told whoppers about basic economics that are embarrassing for anyone aiming to be president."

Claim: "But here is the bottom line: I started off in Brooklyn, New York, not so long ago, with a small loan and built a business worth over 10 billion dollars."

Fact: "But that ignores the fact that he joined his father’s thriving real estates business after college and that he relied on his father’s connections as he made his way in the real estate world," the Washington Post explained when Trump made this same claim in a debate. "Nor does it count the estimated $40 million he received as an inheritance in 1974."

Fact: There's almost no way Trump is worth $10 billion. No one can figure out the true number, since  Trump jealously guards that information, but various investigations have cast doubt that Trump is even worth a billion dollars, much less $10 billion. Ironically, if he had simply taken what he got with his father's help in the 70s and invested it in a standard index fund, he would be worth an estimated $6 billion now. Instead, he tried to manage his own money and now appears to have much less than he would have had by basically doing nothing.

Claim: "Her server was easily hacked by foreign governments – perhaps even by her financial backers in Communist China – putting all of America in danger."

Fact: "A former aide to Hillary Clinton has turned over to the FBI. computer security logs from Mrs. Clinton’s private server, records that showed no evidence of foreign hacking, according to people close to a federal investigation into Mrs. Clinton’s emails," the New York Times reported.

The insinuation that Clinton has "financial backers" sneaking into her email is more conspiracy theory mongering from Trump, similar to his insinuations that President Obama is secretly working for ISIS.

Claim: "Just look at her pathetic email and server statements, or her phony landing in Bosnia where she said she was under attack but the attack turned out to be young girls handing her flowers."

Fact: It's telling that this is literally the best Trump has got, and it's basically nothing. Clinton has definitely been dodgy on the email situation — Glenn Kessler at the Washington Post notes she uses "careful language" that argues "her case on narrow, technical grounds", but admits that did not break the law. Rules-lawyering and political weaseling, sure, but tiddlywinks compared to the true "world class" lies Trump tells, many in this speech.

Fact: In 2008, Clinton took a true story — that she flew into Bosnia during reports of sniper fire  — and exaggerated many of the details to make the threat seem graver than it was. She swiftly apologized for the error, after her exaggeration was discovered.

Generally speaking, it's hard to care much about a bit of political embroidery 8 years ago when the candidate in question is facing an opponent as fundamentally dishonest as Trump.

Claim: "She has pledged to grant mass amnesty and in her first 100 days, end virtually all immigration enforcement, and thus create totally open borders in the United States."

Fact: Clinton proposes reforming our immigration system  to make it easier for families to stay together, but there is no plan for "mass amnesty" or "open borders".

Claim: "Under her plan, we would admit hundreds of thousands of refugees from the most dangerous countries on Earth – with no way to screen who they are or what they believe."

Fact: Clinton does support helping more refugees, though she put the number at 65,000 rather than "hundreds of thousands", but she wants to do so with "the mechanisms for vetting the people that we would take in". The vetting process under Obama is already incredibly onerous, taking an average of 18-24 months.

Claim: "Hillary Clinton’s State Department approved the transfer of 20% of America’s uranium holdings to Russia, while 9 investors in the deal funneled $145 million to the Clinton Foundation."

Fact: "Hillary Clinton's State Department was one of nine U.S. agencies to approve of the transfer of the 20% of the U.S. Uranium reserves to Russia," NBC reports. Clinton simply couldn't be taking bribes to do this, unless Trump is accusing all 8 other agencies of taking bribes, as well.

Claim: "Among the victims is our late Ambassador, Chris Stevens. He was left helpless to die as Hillary Clinton soundly slept in her bed — that's right, when the phone rang at 3 o'clock in the morning, she was sleeping. Ambassador Stevens and his staff in Libya made hundreds of requests for security. Hillary Clinton’s State Department refused them all."

Fact: The right-wing conspiracy theory known as "Benghazi" has been debunked over and over and over again. But the facts: Clinton was not asleep when alerted to the attack on the embassy in Benghazi, but was in her office. That's because the alert was sent at 3:45 PM — that's the afternoon, not the morning. (It's also beyond weird how outraged conservatives are at the idea that someone might be sleeping at 3AM.) Rather than blowing them off, Clinton worked incredibly hard at trying to coordinate a response amidst all the chaos.

Clinton did not deny anyone anything. "Quite the contrary: the safe evacuation of all U.S. government personnel from Benghazi twelve hours after the initial attack and subsequently to Ramstein Air Force Base was the result of exceptional U.S. government coordination and military response," an independent accountability board created by the government found.

Claim: "It all started with her bad judgment in supporting the war in Iraq in the first place. Though I was not in government service, I was among the earliest to criticize the rush to war, and yes, even before the war ever started."

Fact: Trump was not an early critic of the Iraq War, and most of his public statements at the time are moderately supportive of it. He only really started criticizing the war in 2004.

You know who was, however, an early critic of the invasion of Iraq? Hillary Clinton. As Fred Kaplan of Slate reported, Clinton spent much of 2002 making very public demands that the Bush administration try diplomacy and treat invasion as a last resort. "I believe the best course is to go to the United Nations for a strong resolution," she said, one that calls for "for complete, unlimited inspections with cooperation expected and demanded" from Saddam Hussein.

She only voted for the authorization using force because "bipartisan support for this resolution makes success in the United Nations more likely and war less likely", but she firmly argued that there should be no invasion unless Hussein stopped letting in weapons inspectors.

Was her vote a mistake? Yes, she has said so repeatedly. But the public record is clear: She voted for the authorization not because she wanted war, but because she bought into President Bush misleading Congress about his intentions to pursue a diplomatic solution first.

These are just some of the more overt lies that Trump told during this speech. Just as bad were some of the implications. The speech relies heavily, perhaps almost entirely, on right wing conspiracy theories. By stringing together a bunch of disparate and false accusations, Trump is clearly trying to paint a picture of Clinton as some kind of double agent who is secretly working for nefarious "foreign" cabals "who believe women should be enslaved and gays put to death". Again, it's quite similar to the way that Trump winks-and-nudges Obama supposedly being up to no good.

Trump wants people to watch this speech and be alarmed over the idea of Clinton as president. Hopefully, most people will walk away with the opposite reaction: Realizing that it would be a disaster to let a man who is so indifferent to fact and so enamored of lurid conspiracy theories to get anywhere near the White House.