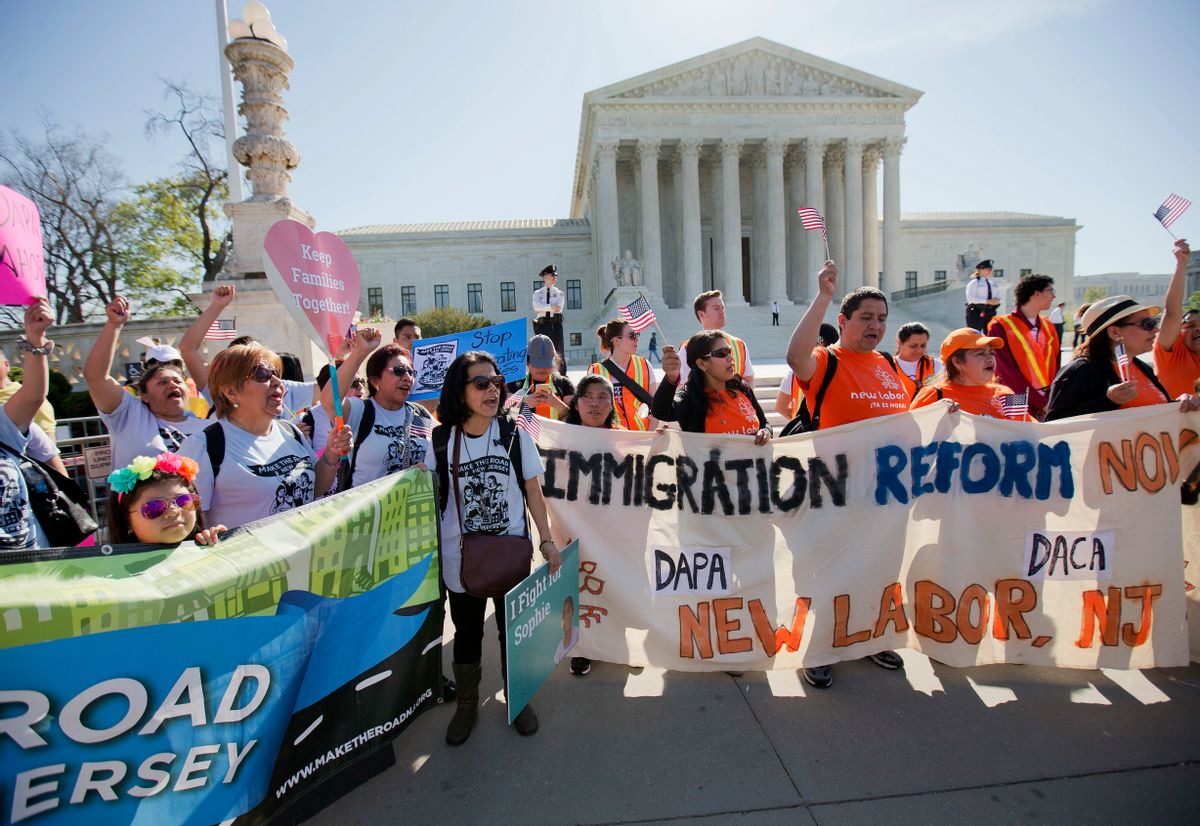 Supporters of fair immigration reform gather in front of the Supreme Court in Washington, Monday, April 18, 2016. The Supreme Court is taking up an important dispute over immigration that could affect millions of people who are living in the country illegally. The Obama administration is asking the justices in arguments today to allow it to put in place two programs that could shield roughly 4 million people from deportation and make them eligible to work in the United States. (AP Photo/Pablo Martinez Monsivais) (AP)
--

It's a story burning up the right-wing blogs and hysterical right-wing corridors on Facebook: Three Syrian refugees, newly arrived due to President Obama's nefarious plans to smuggle scary foreigners in to do evil, got straight to work raping a 5-year-old girl in Idaho. The story spread like wildfire across the right wing internet, complete with lurid details about how the rapists had "dark cloudy skin and curly hair" and the girl was "little tiny white girl, 5 years old". Other outlets reported that the Syrian refugees held the girl at knifepoint and urinated on her and, that when one of the fathers of the rapists found out, he gave him a high five.

The problem is that the story isn't true. Exasperated after being overwhelmed by right-wing nuts making lurid accusations, the prosecutor in Twin Falls County came forward to explain the case.

What did happen appears to be a chilling game of right-wing Telephone. As Twin Falls County officials confirmed, there was an incident where three juvenile boys — who the prosecutor said were Iraqi and Sudanese — were caught doing something with a girl. It's a little unclear what the specifics are, as the case is still ongoing and the suspects and victim are juveniles, but the prosecutor denies it was a gang rape and says that only one person touched the victim. The boys were 7, 10, and 14 and the girl was 5.

"Loebs said sex cases between minors aren’t uncommon and implied that this case is being exploited by the local anti-refugee movement to make a political point," the Idaho Statesman reported.

Looking over the drooling hysteria spreading across the right wing internet, one can safely say "exploited by the local anti-refugee movement" is an understatement. Photos are being circulated taken by local people claiming that they are of the perpetrators and their family, though there is no evidence of this. Rumors are flying that the authorities are trying to cover this up and are lying about what happened. And, of course, the whole thing is rooted in a belief that the only people who ever commit sex crimes are foreigners. A sample of some of the social media hysteria out there: Monday night, a city council meeting in Twin Falls was jam-packed as people, hopped up on all this hysteria and believing that refugees were descending on the city to rape their children, crowded the room. The police chief tried to reassure the crowd that things were under control — the two boys suspected of an assault were in custody, and the case was being thoroughly investigated — but once racist hysteria sets in, there's very little you can do to dial down the freak-out.

"The nation of Islam has declared global jihad on us,” local resident Vicky Davis declared during the meeting. "And Obama, this administration, is bringing them in as fast as he possibly can.”

Another resident, Terrence Edwards, passed out copies of the constitution and declared the the city council members are somehow not upholding it, due to a willingness to allow Muslims to live in the area.

“The Muslim influence is not just a religion,” Edwards declared. “It’s a theocracy.” (It is worth noting that the constitution actually protects the right of Muslims to practice their faith, but again, people caught up in a racist hysteria are rarely interested in facts.)

Upon finding out that they got almost none of the details about this story right, the right-wing outlets that spread this urban legend about Syrian refugees gang-raping a child remain defiant.

"Authorities are now furiously denying that there was any gang rape or that the refugees involved were Syrian, without addressing the other allegations," Jihad Watch said in an update. (This is a lie. The prosecutors also denied that there was a gang rape or a knife and generally framed this incident as one of juvenile child molestation.) "Their claims would inspire more confidence if authorities weren’t lying to the public with increasing frequency, especially in regard to Muslim migrants."

The site produced no evidence of the "lying" that is supposedly happening with "increasing frequency".

WorldNetDaily and Michelle Malkin went with the okay-they-may-not-be-Syrian-but-still-Muslim spin, coupled with accusations against the media and the authorities of a cover-up.

UPDATE: Betsy Russell of TheSpokesman.com has claimed that the following story is false. She wrote about it here. She is the only person claiming that it is false. Her story includes no sources. Trying to do my due diligence, I called her however, at her publicly listed number and she references here (208-336-2854). She provided no sources other than the claim of interviews via phone with no corroboration. I subsequently called the district prosecuting attorney, Grant Loebs, to no answer. This doesn’t officially confirm, nor deny the story, but as of this writing, there are more verified sources claiming it to be true than not.

The update, unsurprisingly, is also a load of horseshit. Russell's reporting has plenty of sources: Twin Falls prosecutor Grant Loebs, Zeze Rwasama of the College of Southern Idaho Refugee Center, Jan Reeves of the Idaho Office for Refugees.

Plus, her website is far from the only place debunking this story. The story is debunked at the Idaho Statesman, KTVB, and KBOI.

Meanwhile, Crowder had a show where he mocked and denounced anti-rape activists, denying multiple studies that show that rape is common. To discredit Lena Dunham for speaking out against rape, he calls her a "sauntering bovine" and whines that "nobody is wearing shoes" in an anti-rape video Dunham released.

Reading his site, you get the distinct impression that rape only counts if it can be used to demonize immigrants. If you care about victims of any other kind of rape, you'll be dismissed on the grounds that Crowder doesn't like your feet or the shape of your body.

This whole debacle is a chilling reminder of how much political discourse, especially on the right, is shaped by urban legends, conspiracy theories, and rumor-driven hysteria. To be clear, all signs indicate that these boys likely did something wrong. However, the authorities are dealing with it in a manner that is appropriate to both their age and that of the victim.

There is no "cover-up" and there is no reason to think this crime says anything about immigration. After all, even though Steven Crowder would deny it, sexual assault is maddeningly common, committed by men and boys of all backgrounds and ethnicities. Just put "sexual assault minor" into the Google News search engine, and you will get a depressingly long litany of mugshots of all sorts of men, with plenty of white men amongst them.

The selective outrage, where rape is a terrible crime that requires public panic if the accused is Muslim and something to be minimized with the victims accused of exaggerating if committed by anyone else, speaks volumes about what is going on here. The only people exaggerating rape here are right wingers, who took an incident that sounds bad and added a bunch of lurid and false details aimed at stoking hatred of immigrants, most of whom are innocent of any kind of crime.