The Southwest is burning: Wildfires rage amidst record-breaking heat wave 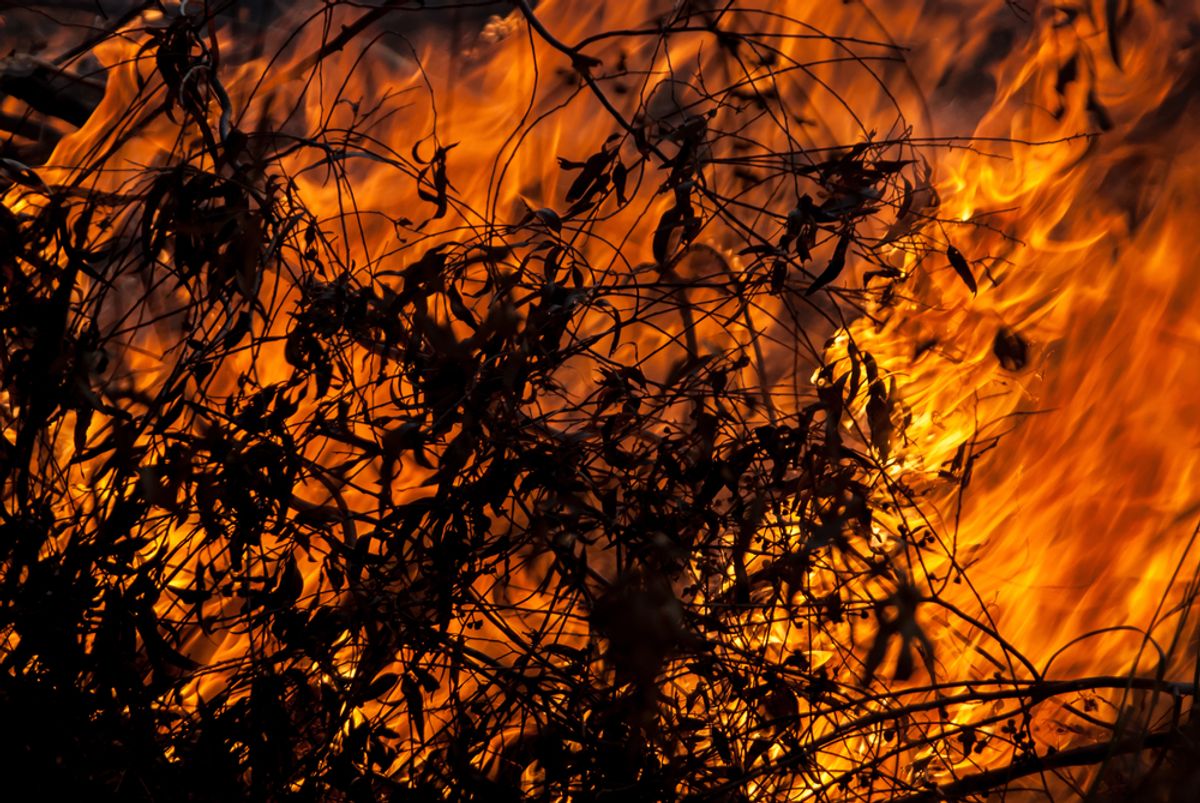 At least four people have died in a record-setting heat wave that has engulfed the southwestern United States. The deaths occurred in Arizona, where the temperature hit 120 degrees in some places. More than 30 million people are currently under heat warnings or advisories.

The Red Cross defines a heat wave as “a prolonged period of excessive heat, generally 10 degrees or more above average, often combined with excessive humidity.” In Phoenix the thermometer climbed to 118 degrees, nearly hitting the city’s all-time record of 122 degrees—so hot a Mesa Airlines flight to the city on Sunday was routed back to Texas.

"There'll be a bunch of records broken again today," said CNN meteorologist Chad Myers. "It's not even cooling down at night—that's another part of the problem." The record temperatures are making it the hottest-ever start to summer in Arizona, New Mexico and California, said CNN meteorologist Pedram Javaheri.

By midweek, Weather Channel meteorologist Reynolds Wolf said, the range of extreme heat will spread to the middle of the country. The scorching temps are expected to grip the eastern U.S. later this week. According to the Centers for Disease Control and Prevention, extreme heat causes an average of 675 deaths in the United States every year. That's more fatalities than caused by floods, hurricanes, lightning or any other weather event combined.   The blistering temps are giving firefighters a big headache as well. Fire officials said the heat wave would hamper efforts to combat several serious wildfires that have already forced evacuations in three states. CNN reports that fires cover an area larger than Paris. In New Mexico, firefighters are having difficulty containing the Dog Head fire, which has damaged at least 24 homes and burned through nearly 18,000 acres some 30 miles south of Albuquerque. According to incident commander Rich Nieto, the fire was only 9 percent contained on Sunday.

"The weather forecast ... calls for unseasonably warm air temperatures along with a drying trend which will continue to develop over the region," reported fire officials. "This pattern will continue to increase fire behavior and smoke production."

A fire near Potrero, Calif., called the Border Fire, ballooned to encompass 1,500 acres along the U.S.-Mexico border Sunday afternoon. The entire population of Potrero—about 700 people—was evacuated. On Sunday night, the California Governor’s Office of Emergency Services secured a Fire Management Assistance Grant from FEMA to help contain the blaze. Outside Santa Barbara, air tankers continued to dump water over the Sherpa Fire, which sparked Wednesday and has already burned through 8,000 acres. Though the fire was more than 50 percent contained as of Sunday afternoon, fire officials were hesitant to claim victory and issued a red-flag warning, which will remain in effect until Tuesday morning.

"If we had a week without wind, we'd be great," said Capt. Dave Zaniboni of the Santa Barbara County Fire Department. "Unfortunately, that's not predicted. We have to get through these next couple days with red flag warnings."

In eastern Arizona, wind was not the main concern for fire crews battling the Cedar Fire, where flames have been driven by heat. "Over the next 24 hours, fire will continue to spread on the south and east flanks due to burnout operations, resulting in increased smoke and acreage growth," according to an incident report. The blaze has burned over 12,000 acres and was 40 percent contained as of Sunday afternoon.

The increase in wildfires has been linked to the increase in average temperatures caused by the climate crisis. According to Climate Central:

Since 1970, the annual average number of wildfires larger than 1,000 acres has more than doubled in the western U.S. The typical wildfire season has also stretched by about two and a half months longer over that time. The main cause has been rising temperatures that have led to earlier snowmelt in the western U.S., which has led to drier conditions. These factors are helping drive an increase in the total area burned. Projections indicate that for every 1.8°F further rise in temperature—and the western U.S. could see average temperatures rise by up to 9°F by 2100—there could be a quadrupling in the area burned each year in the western U.S.

Relief from the heat will not come soon enough. According to a National Weather Service report issued Monday morning:

Very strong high pressure sprawling across the southern United States will bring record heat to the region again today with most lower elevation locations experiencing highs in the 115 to 120 degree range. A combined increase in moisture and cloud cover will yield slightly cooler temperatures for the remainder of the week, where many communities will see readings falling towards a 108 to 113 degree range. ...

The NWS also released several temperature records that were broken across California on Sunday:

The Red Cross suggests that people experiencing a heat wave take these precautions: