UPDATED: "We will occupy this floor": House Dems stage sit-in to call for gun vote 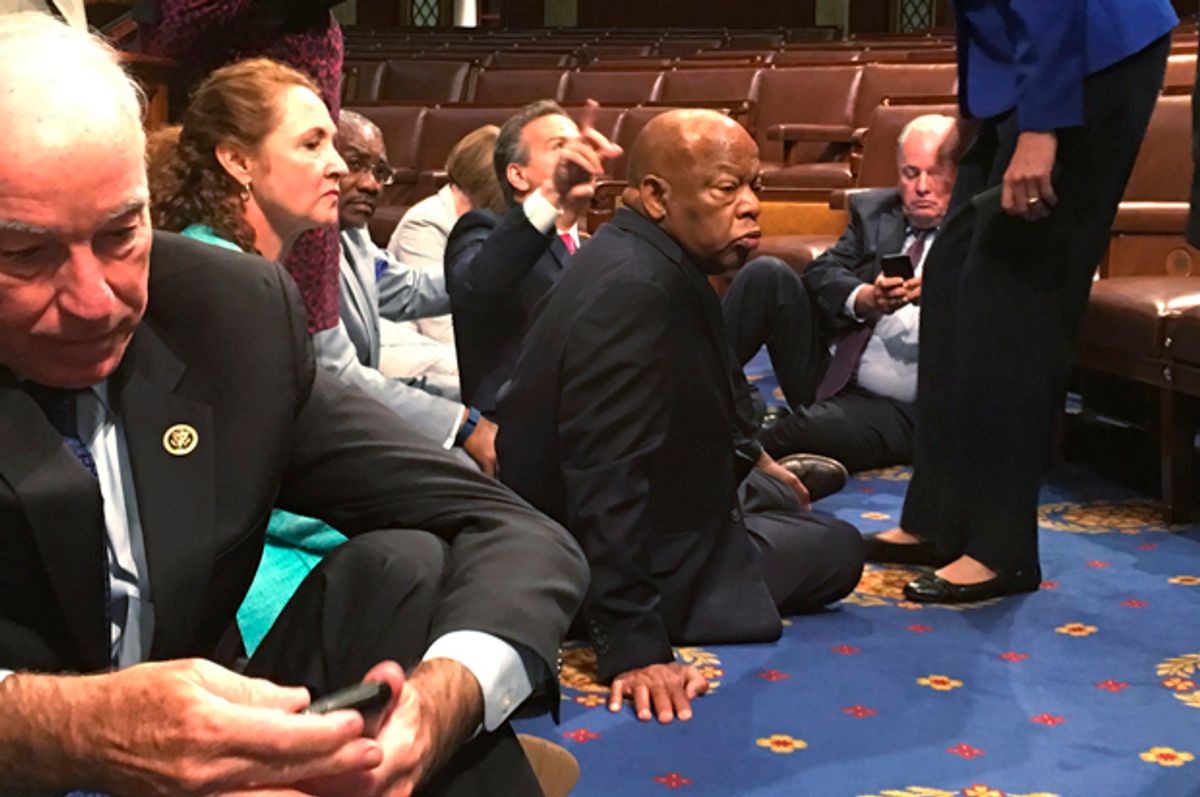 A photo shot and tweeted from the floor of the House by U.S. House Rep. John Yarmuth shows Democratic members of the House, including Joe Courtney (L) and John Lewis (C) staging a sit-in on the House floor "to demand action on common sense gun legislation," June 22, 2016. (Reuters/U.S. Rep. John Yarmuth)
--

House Democrats staged sit-in on the floor of the House of Representatives Wednesday morning to demand a vote on gun control measures.

As of Wednesday afternoon, over 75 members of Congress had joined in the protest, sitting in solidarity directly in front of the House rostrum and calling for House Speaker Paul Ryan to allow a vote on gun control proposals, including the "no fly, no buy" bill, a bipartisan measure that would ban individuals on the government's no-fly list from purchasing guns.

Republicans gaveled the House into recess shortly after the sit-in began at around 11:30 AM on Wednesday, preventing C-SPAN cameras from covering the action, but protesting House members took to social media to publicize their action by live-tweeting from the floor using the hashtag #NoBillNoBreak.

With C-SPAN unable to broadcast the protest using House cameras (which are controlled by Republican leadership and only used while the while the House is in session), some in the chamber live-streamed video of the proceedings using services such as Periscope and Facebook Live. C-SPAN eventually circumvented the House camera blackout by picking up a live broadcast from inside the House streamed from Rep. Beto O'Rourke's Facebook account.

With the House officially in recess, protesting Democrats took turns speaking on gun violence in the House chamber, hailing the conclusion of each speech with the call-and-response chant of "No bill, no break!"

The protest is being led by Georgia Rep. John Lewis, who organized sit-ins at segregated lunch counters in the Jim Crow South during the civil rights movement. In a House speech this morning, Lewis called for lawmakers to "make a down payment on ending gun violence in America."

During his speech, Lewis was joined on the House floor by dozens of Democratic colleagues. "Today we come to the well of the House to dramatize the need for action," Lewis said. "Not next month, not next year, but now."

"We will occupy this floor," declared Connecticut Rep. John Larson as Lewis concluded his speech. "We will no longer be denied a right to vote."

House leadership immediately gaveled the proceeding into recess as the Democrats who joined Lewis behind the lectern began sitting on the floor of the chamber.

The House was scheduled to reconvene early Wednesday afternoon. Republicans attempted to bring the House back into session around noon, but gaveled the chamber into recess again when Democrats refused to yield the floor. As speaker, Paul Ryan has the authority to suspend House business "for a short time." Ryan spokeswoman AshLee Strong told USA Today, "The House cannot operate without members following the rules of the institution, so the House has recessed subject to the call of the chair."

Hillary Clinton and Barack Obama voiced their support for the sit-in on Twitter:

Democrats say they will not end their sit-in until Republican House leadership allows a vote on gun control measures, and are reportedly prepared to stay for multiple days.