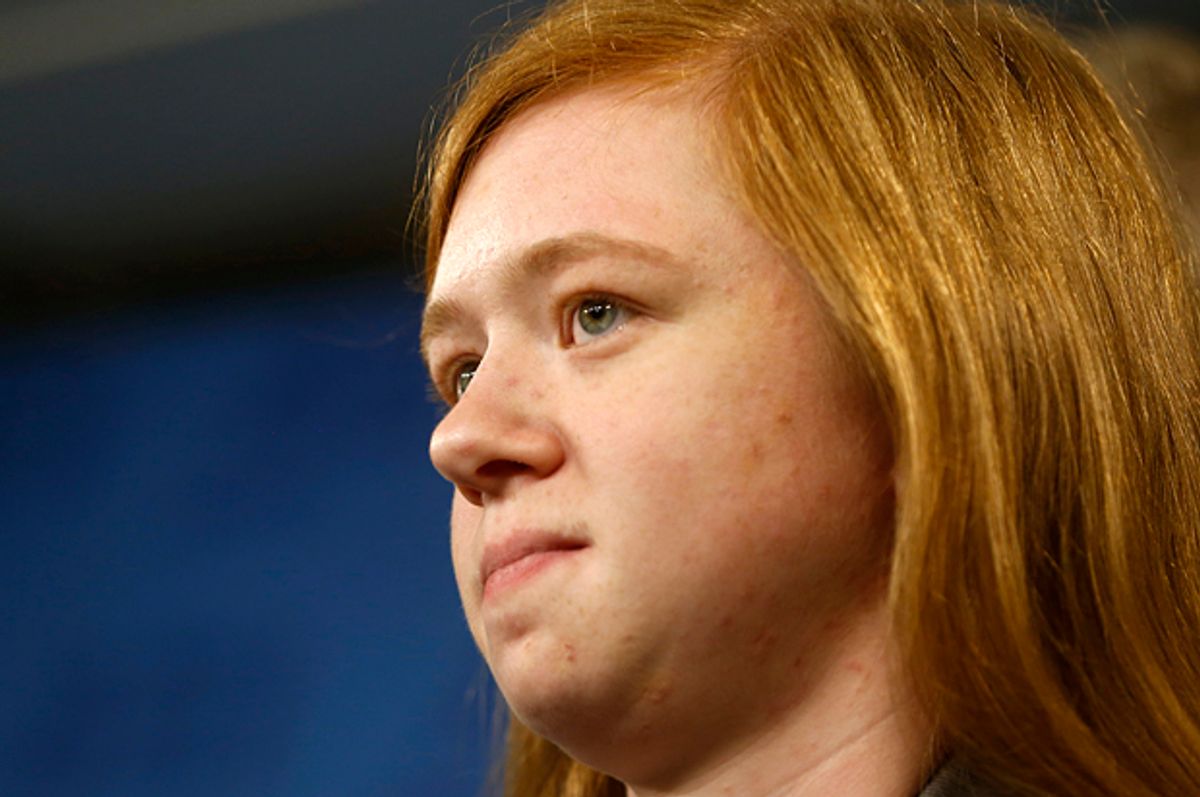 Abigail Fisher, the plaintiff in the latest round of affirmative action cases heard before the Supreme Court, is the perfect villain in a liberal morality play about the evils of racism.

Fisher's case before the Supreme Court, in which she demanded that she be admitted to the University of Texas at Austin despite not having the grades to get in, confirmed every liberal suspicion about the opposition to affirmative action, namely that it's not about "equality" at all, but about making sure white people are always first in line, ahead of all people of color, for job and education opportunities. That her lawyer, Edward Blum, has made a career out of creative litigation designed to keep people of color from getting jobs, schooling, and even political representation simply confirms it further.

But all this just makes it all the more emotionally satisfying to report that Fisher was handed a huge defeat in the Supreme Court on Thursday, when conservative justice Anthony Kennedy sided with the liberal side of the court to preserve UT Austin's admissions protocol aimed at promoting racial diversity at the school.

“A university is in large part defined by those intangible ‘qualities which are incapable of objective measurement but which make for greatness,’” Kennedy wrote in his decision. “Considerable deference is owed to a university in defining those intangible characteristics, like student body diversity, that are central to its identity and educational mission.”

The invocation of "intangible qualities" is especially critical in this case, which addresses a small number of slots the school offered for provisional admission in 2008. These are students that are admitted even though they don't have the grades or SAT scores that you usually need to get into the school. The school brings these students in anyway because they see potential for them, despite their mediocre scores. Fisher sees herself as one of those people, but the school did not.

In 2008, 47 such students were admitted who had lower grades or test scores than Fisher. Forty-two of them were white. Only five were people of color.

Fisher and her lawyer Blum were not challenging the admission of the 42 white students.

Instead, Fisher's argument was narrowly that she should have been admitted instead of one of those students of color. It was the case that collapsed any distinction between opposing affirmative action and demanding that white people be given preference.

But, even though this ruling is really narrow and does little to truly increase diversity at universities, Justice Samuel Alito issued a lengthy, blistering dissent that accused the school of paying "little attention to anything other than the number of minority students on its campus and in its classrooms".

It's an argument that depends on wholly ignoring the 42 out of 47 students that are white that got in despite having lower grades than Fisher's. Like Fisher and Blum, Alito simply assumes that the white students have merit and the students of color do not.

It's sadly not surprising that Alito so quickly defaults to the racist assumption that white people are more deserving of their opportunities than people of color. During his confirmation hearings to the court, it was revealed that Alito had been a member Concerned Alumni of Princeton (CAP), a group formed in 1972 to keep women and minorities from attending the Ivy League university.

"People nowadays just don't seem to know their place," Kennedy read from on 1983 article. "Everywhere one turns, blacks and Hispanics are demanding jobs simply because they're black and Hispanic. The physically handicapped are trying to gain equal representation in professional sports. And homosexuals are demanding the government vouchsafe them the right to bear children."

Alito denied agreement, saying the article was "antithetical" to his views. And yet, his dissent from Thursday betrays him, as he wallows in the same false assumption that people of color are only getting education and job opportunities because of their race, and not because they are just as worthy as white people.

Alito wants to portray this decision as some kind of radical progressivism, but in reality, it's an extremely conservative opinion that, in classic Kennedy fashion, doesn't do enough to shut down attempts to preserve the white dominance over institutions like elite universities.

"Kennedy’s opinion makes it clear that universities have a high and ongoing burden if they want to maintain affirmative action programs," Ian Millhiser at Think Progress explains. "It could also potentially inspire a rash of harassment suits targeting these programs."

Millhiser goes on to highlight how much work UT Austin had to do in order to meet Kennedy's onerous demands for race-sensitive admissions to be acceptable: Over a year of research and study resulting in a 39-page proposal proving that any other strategy was failing to meet diversity needs. And all this, it's worth remembering, is only aimed at the tiny fraction of applicants considered on a provisional basis, as most slots are filled by students who meet the grade and SAT requirements. It was such a fight to protect 5 out of 47 students that it pretty much invites future litigation from conservative lawyers who think 5 out of 47 is just too many.

Still, Thursday is a victory all the same, because it's a blow to this ridiculous notion that any time a person of color gets an opportunity, they are stealing it from a more deserving white person. It's a good step in the right direction and, if Democrats are able to overcome Republican obstructionism on court appointments, it's something for future, more liberal judiciaries to build on.